My friend's daughter had V one afternoon and took some photos with her iPad. 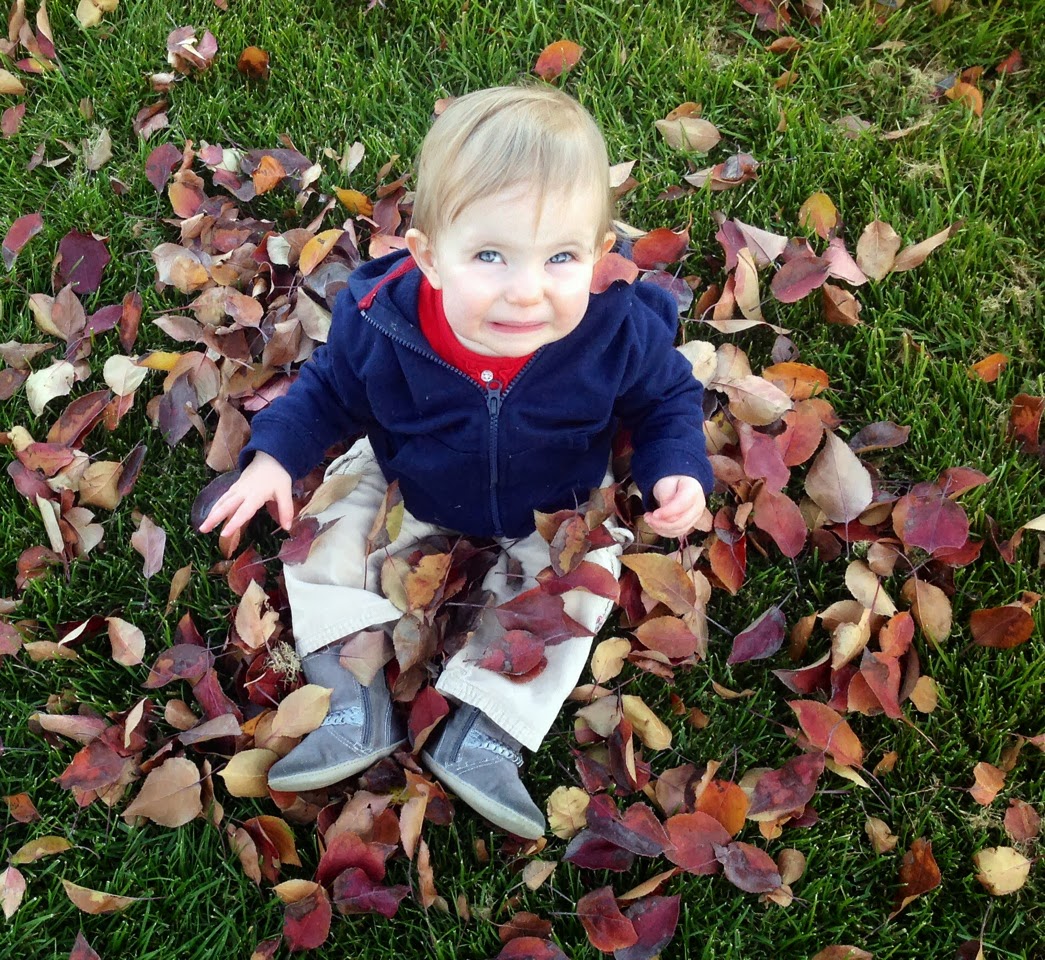 Vesper isn't sure about cold grass and damp leaves... 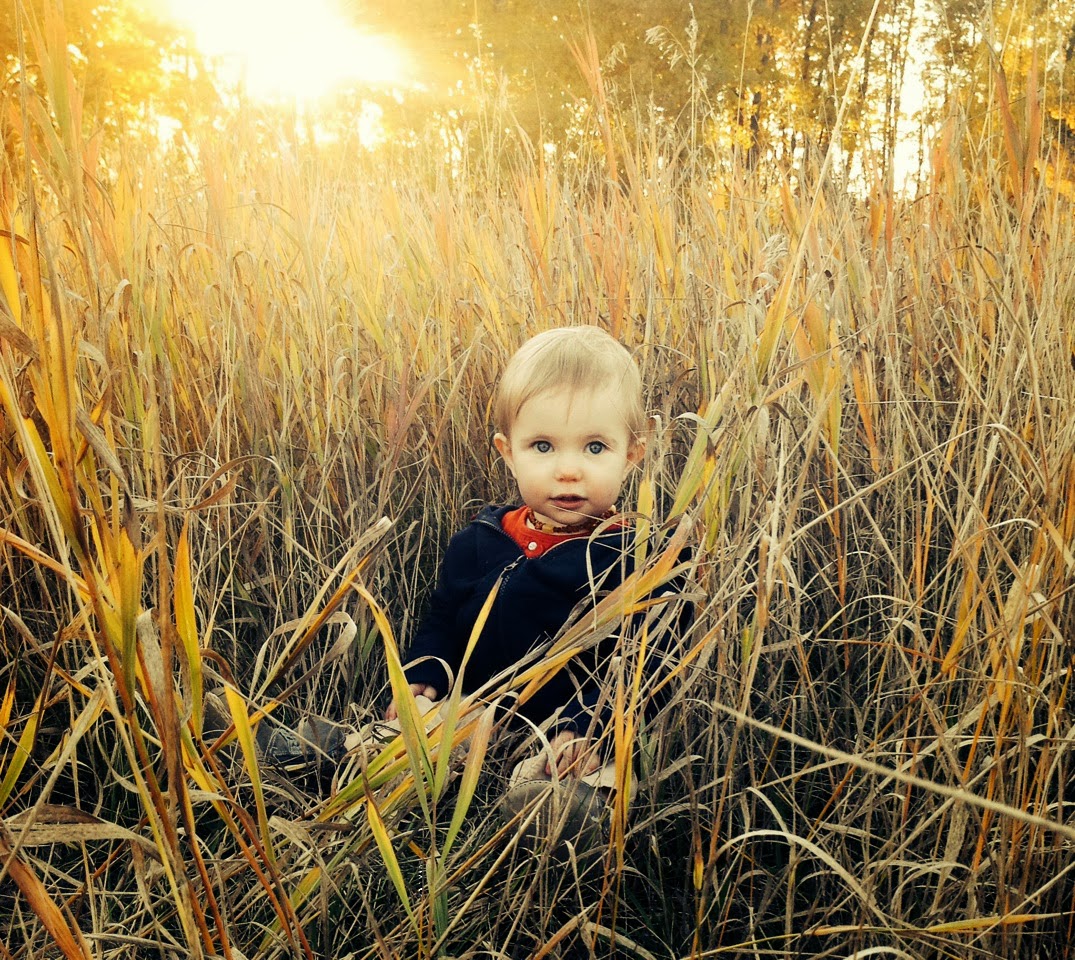 ... but apparently THIS is her happy place.
Or lovely place. Either one. 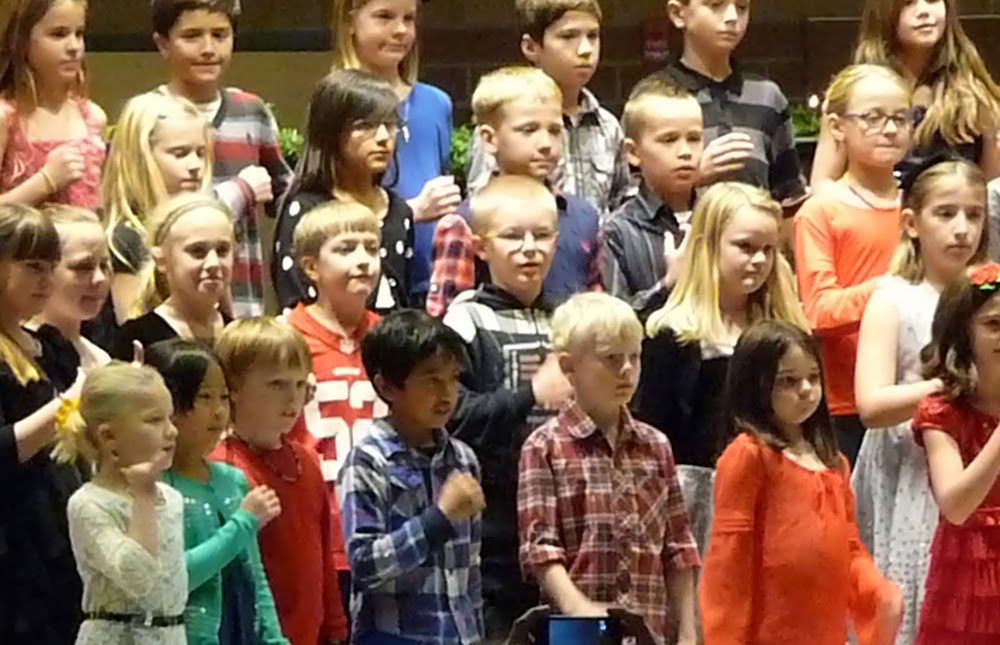 My cheerful holiday Vader, singing in the Christmas program. I always forget about dressing him up for the program until all the kids start filing out and I see how nice they look in fancy duds.

He never cares though, so maybe I should let it go? 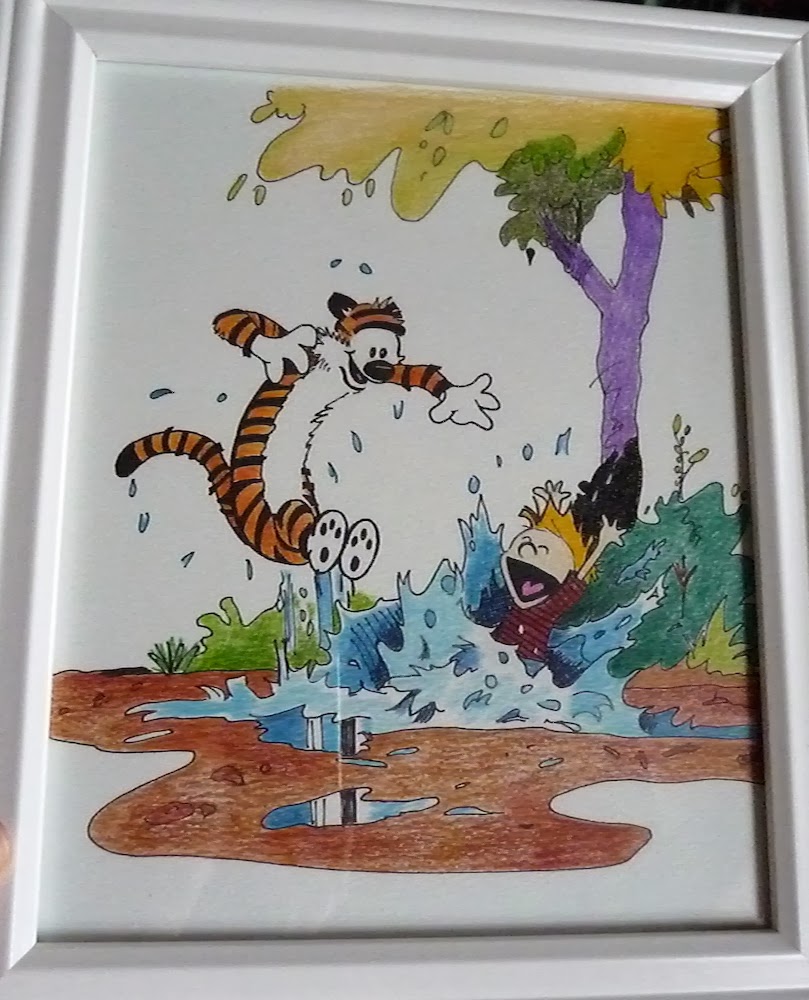 Blake loves Calvin & Hobbes just like Rob and I do, which is both sweet and alarming. For Christmas, I wanted to do something special and unexpected, so I drew this for him, based on one of the illustrations in one of our many books. Rob repeatedly asked if I traced it, but don't worry, I still love him. He just didn't realize he'd married a master forger. 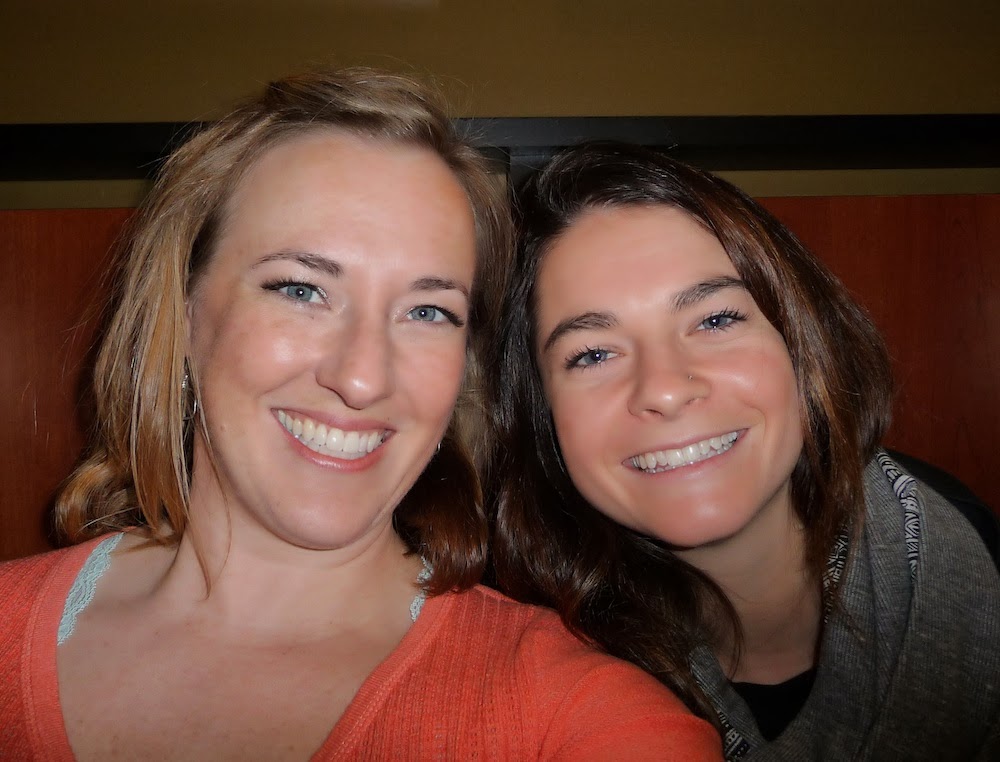 The sweet friend who took our Christmas card photos (forthcoming). And by sweet, I mean "sweet like a rash," because at one point after I snapped this selfie at our little coffee date, she made the comment that I had practically raised her.

Ok, I DID babysit for her and her little sister and brother pretty regularly, but I had deluded myself into feeling like her peer now that we are both all growed up. Guess she had to make sure I knew that I was more growed up than her. PFFT. It's like she barely knows me!

I gave Blake a snowball maker/thrower for Christmas, and gave one to Rob, too. Arm the son, arm the father. It's only fair. And then I read this warning and thought "If you seriously damage, injure, or kill yourself while throwing snowballs, you are DOING IT WRONG." 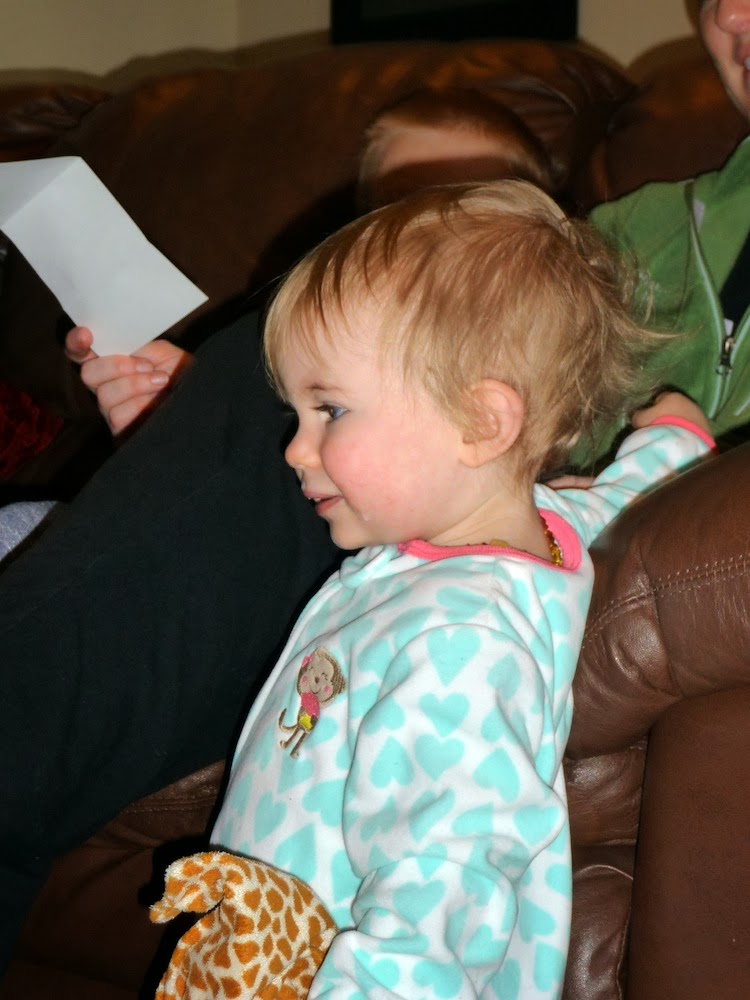 More interested in Christmas this year, Vesper still had no idea what was going on. 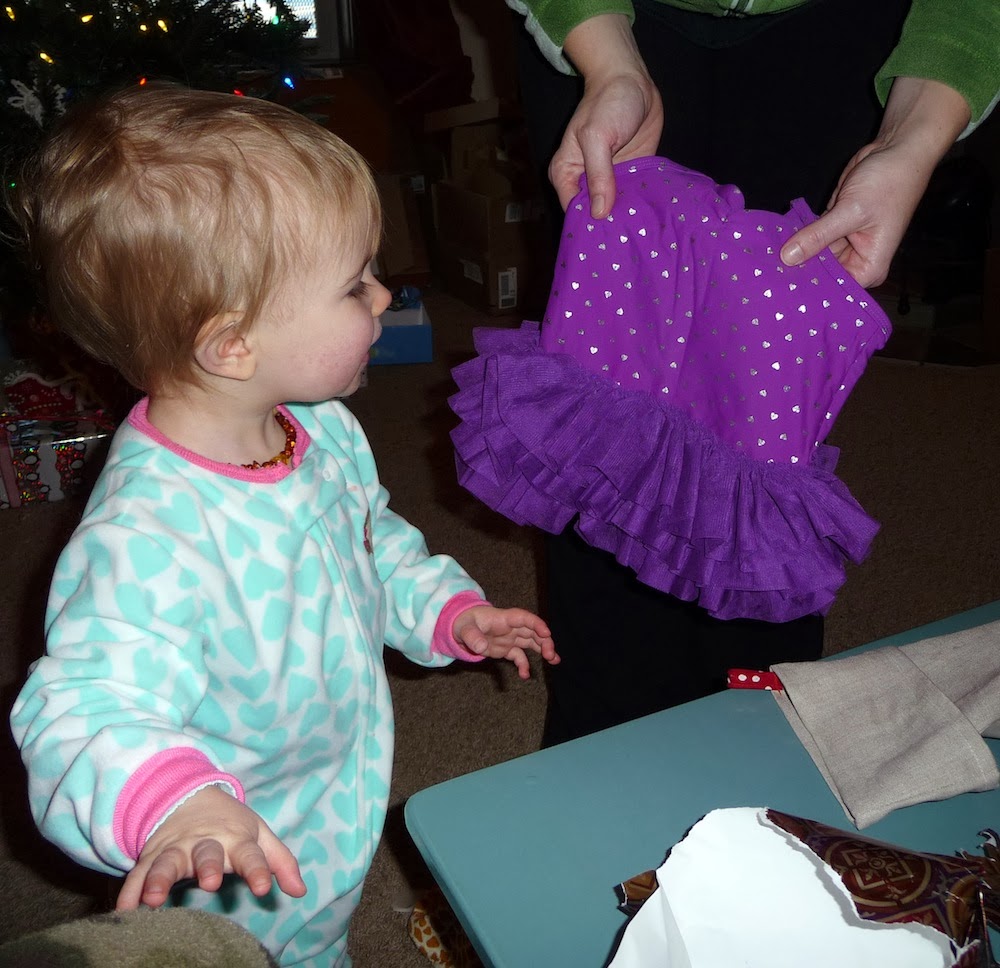 We started opening gifts, and she was clearly stunned: "These have been under the tree THE WHOLE TIME! Why haven't we done this sooner?!" 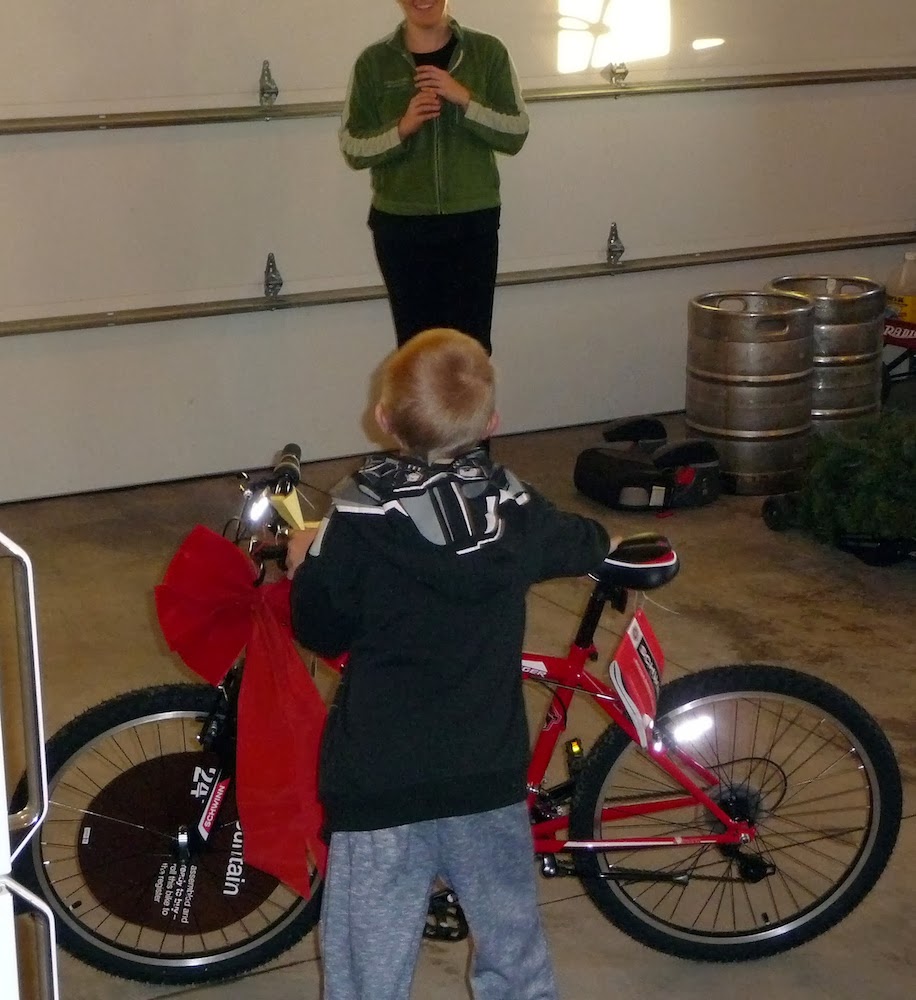 B's big gift this year was a bike that actually fit him. Or at least will in about five minutes. It's big yet, but he's growing quickly! I got to the back of Target with my full cart, pulled the bike down, and realized that I had made a huge mistake. I needed both the cart AND the bike. There was just me.

So I hopped on the bike and rode it one-handed to the cashier, pulling the cart alongside. Target was less crowded than usual, which made it all work, but there were still PLENTY of people to stare, point, and giggle. Totally worth it.

Rob sent B on a scavenger hunt to find it, roaming upstairs to the guest room, down to the piano room, to the tree, and finally to the garage, where I was waiting. The downside to a bike at Christmas: he's not had much opportunity to ride it on our snowy/icy/slushy streets. 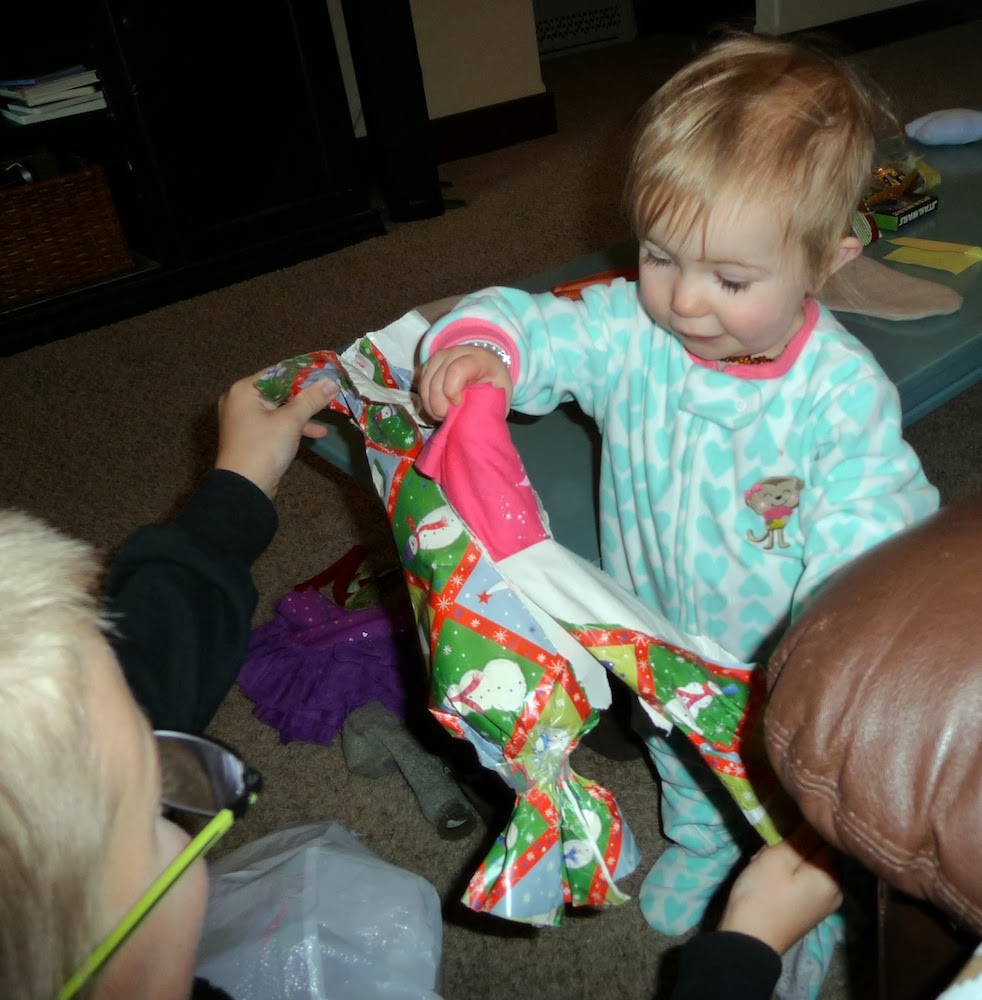 I can just hear here saying her new favorite exclamation: "WHAT."

That's it. "WHAT." It's delightful. She's only being saying that for about a week or two, but the happy, surprised look on her face is the same. 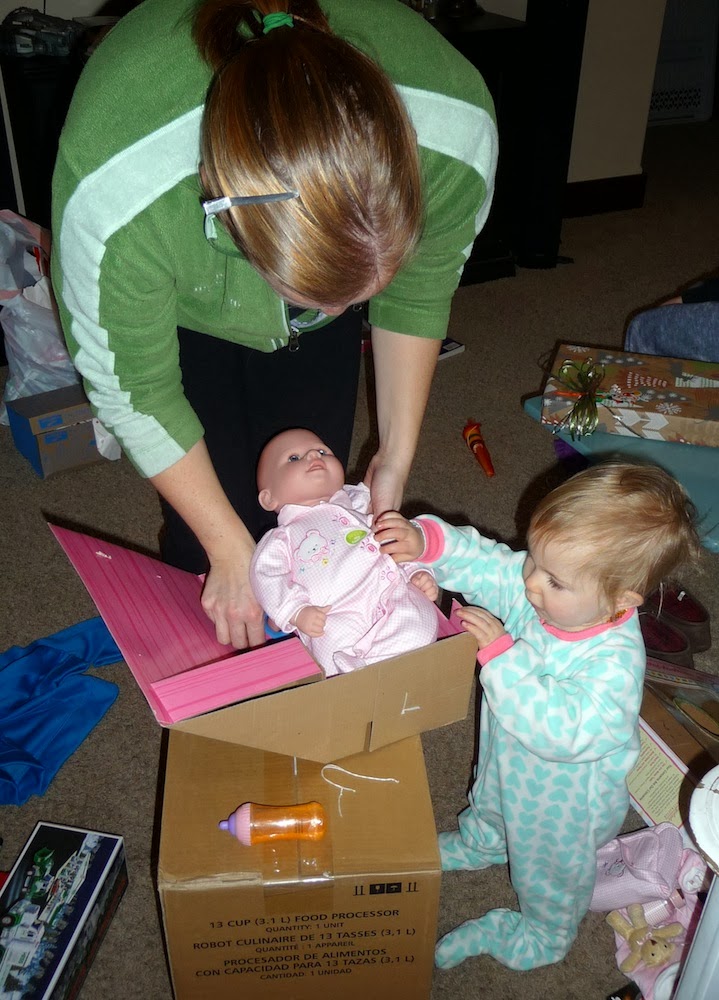 Vesper got her first LEGOs and her first doll this Christmas. She vastly prefers her baby. 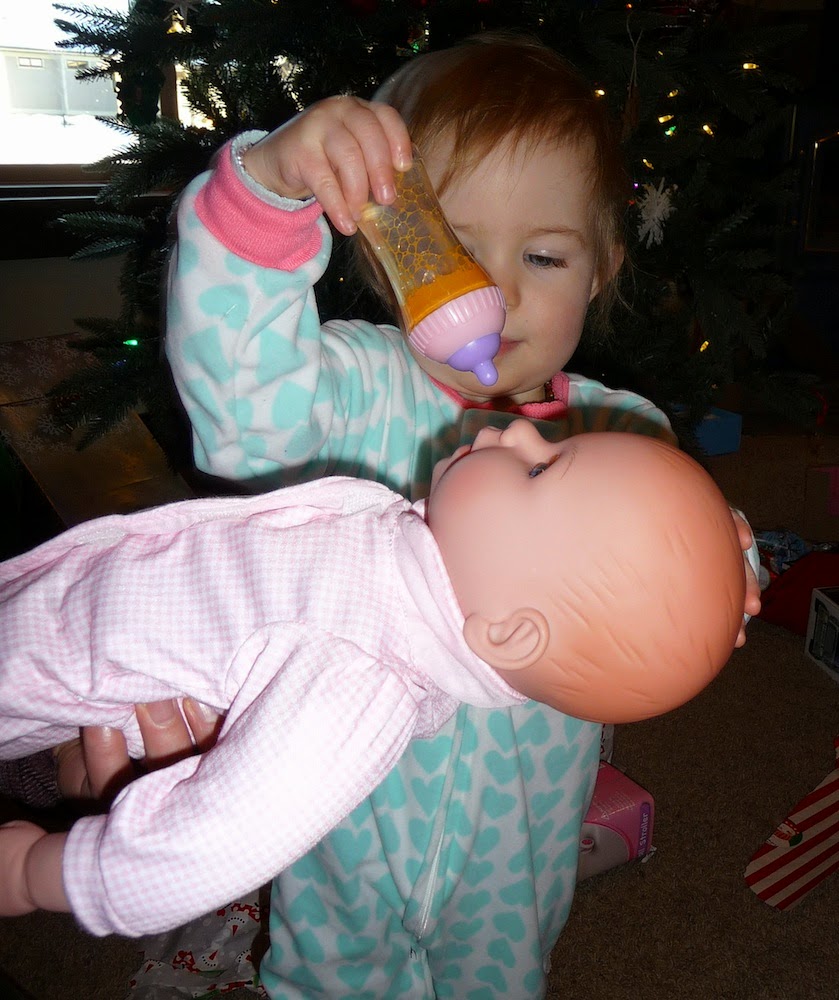 Upon seeing all the juice disappear when she fed the baby, she looked mystified. She had been sucking on that bottle all morning, and not a drop was forthcoming. What made baby so special? She popped it back in her own mouth and has still not figured it out. 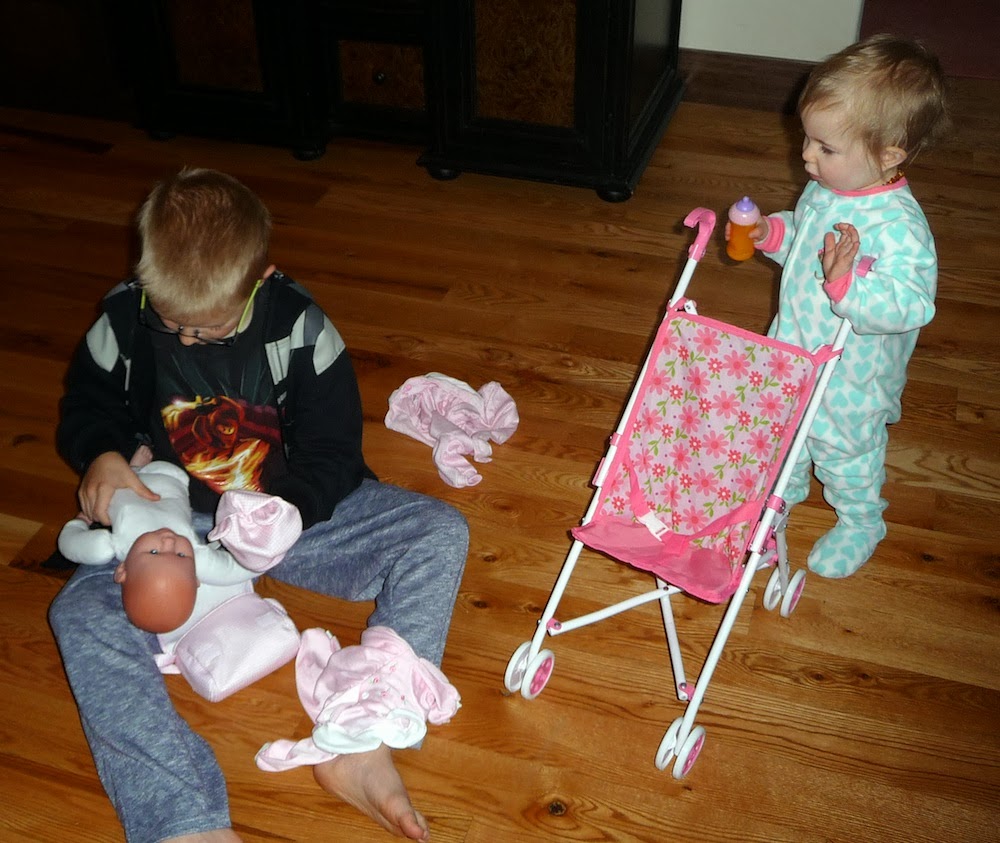 Blake also liked the doll, called "Emma Talks Too Much," and I have to say, if you've named anything as doing something "too much," then you might want to rethink your branding. 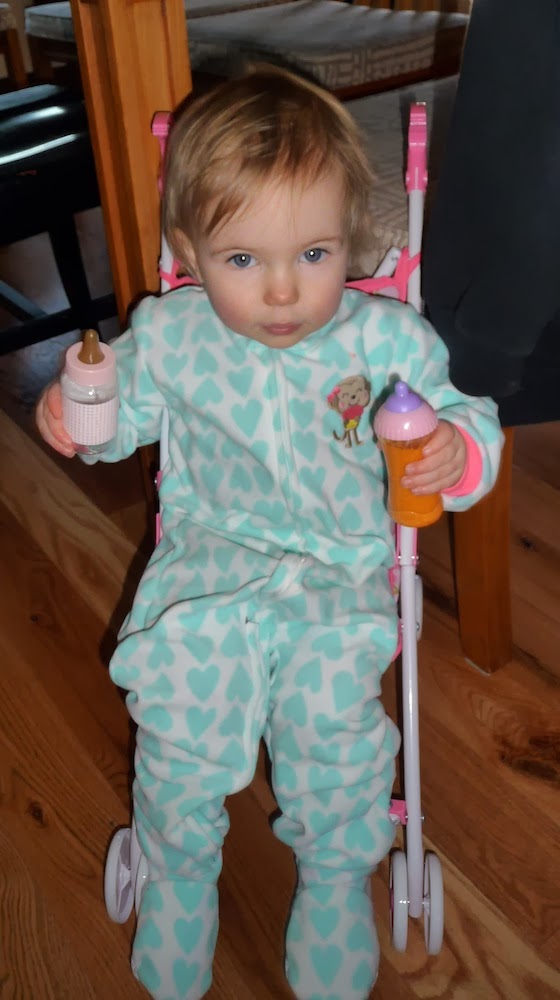 This stroller clearly states that it is for dolls ONLY, not for children, and Vesper is already showing her disdain for the man. 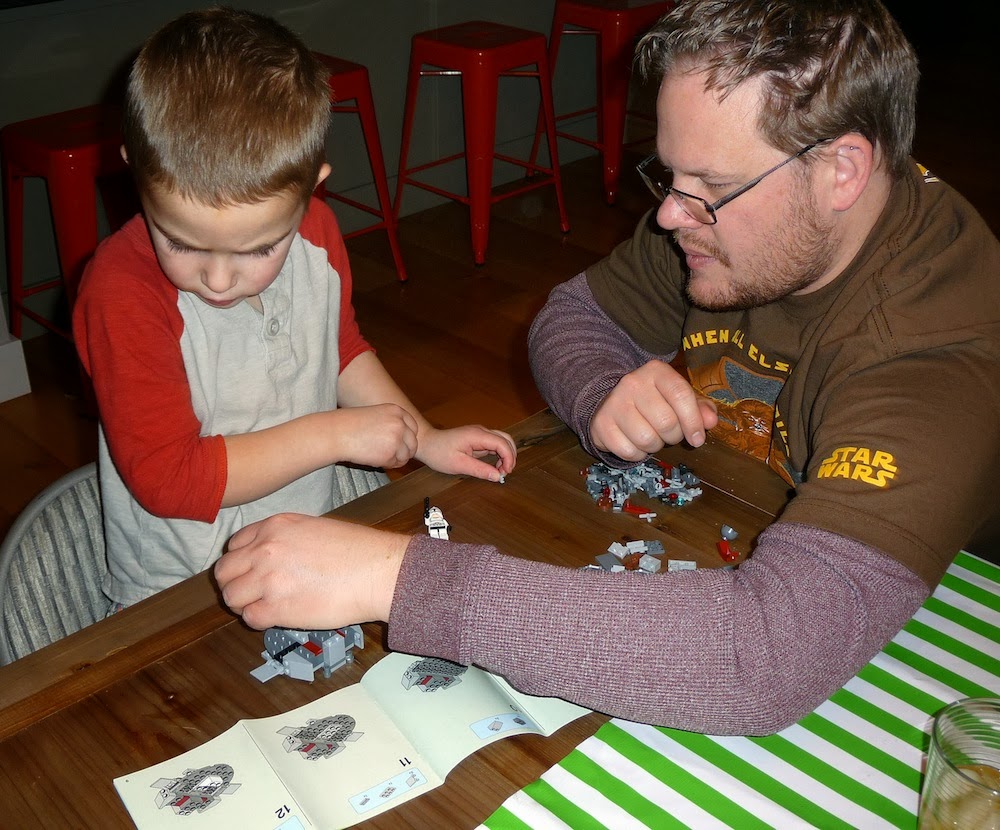 Pre-dinner fun at the new Schuyler house. Sawdog loves LEGOs like his brothers and cousin, but his skill needs to catch up. Rob had a lot of fun being needed for LEGO help again. 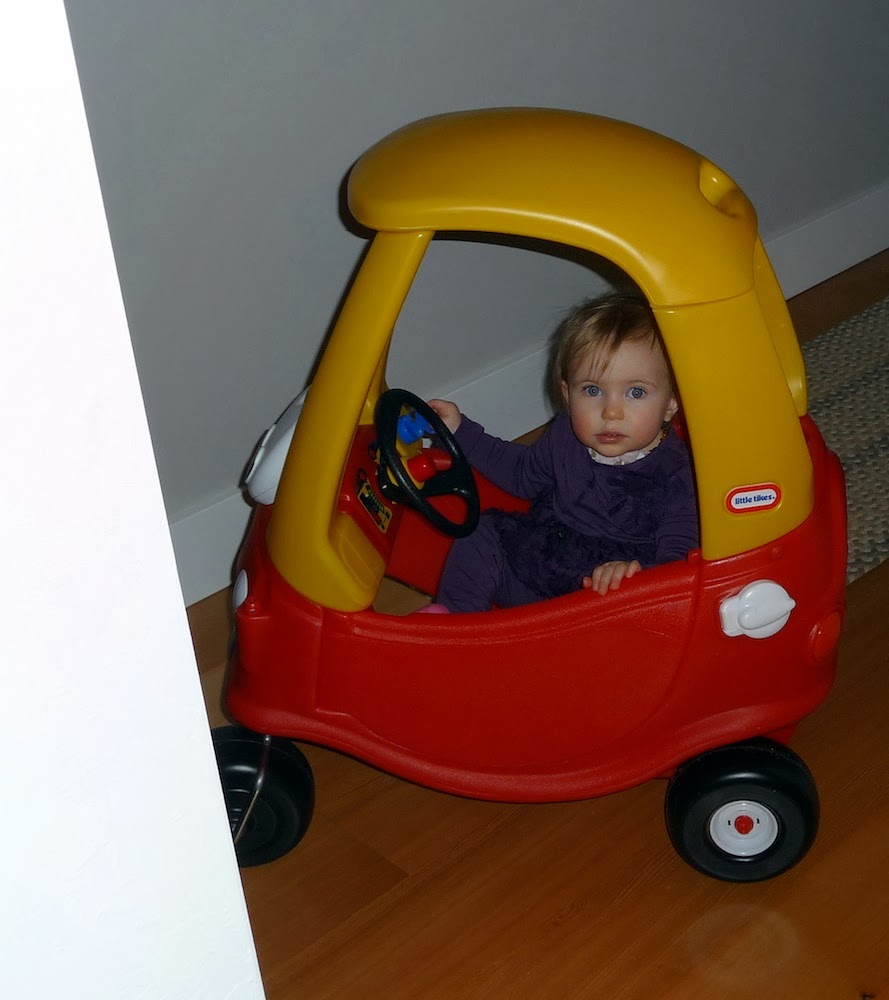 Gunner got a little rascal! Vesper promptly stole it as he stole her baby. And no one drove it down the stairs. That is winning, folks. 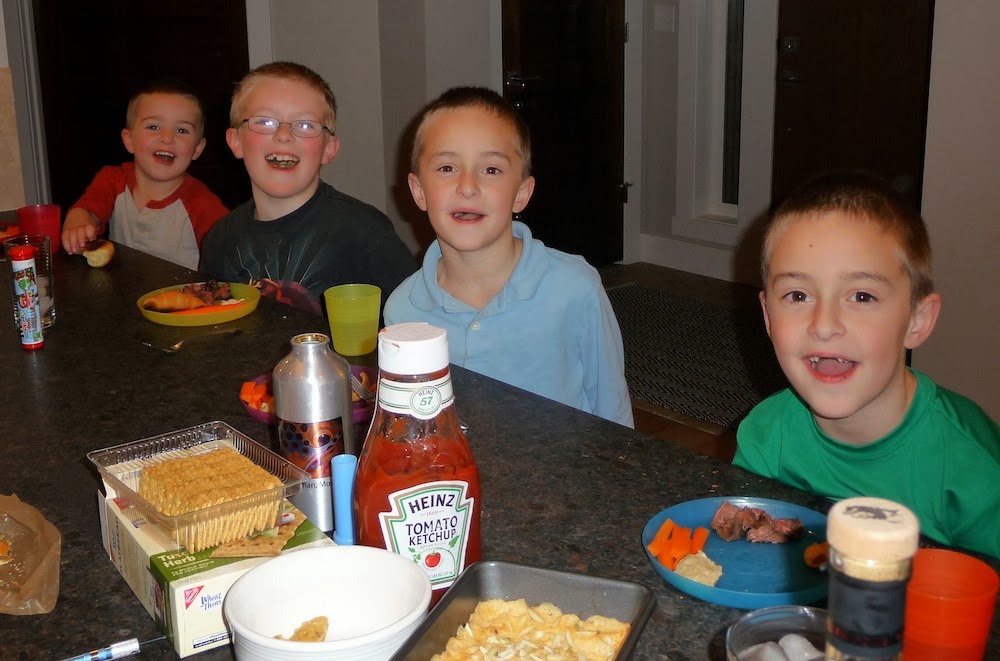 The older boys, wolfing down dinner to dash back downstairs. They left us with the littles, and a quiet, peaceful, delightful Christmas meal commenced as we adults remembered what it is like to have a conversation at normal volume and pace.

Now, all I want for Christmas is a basement. 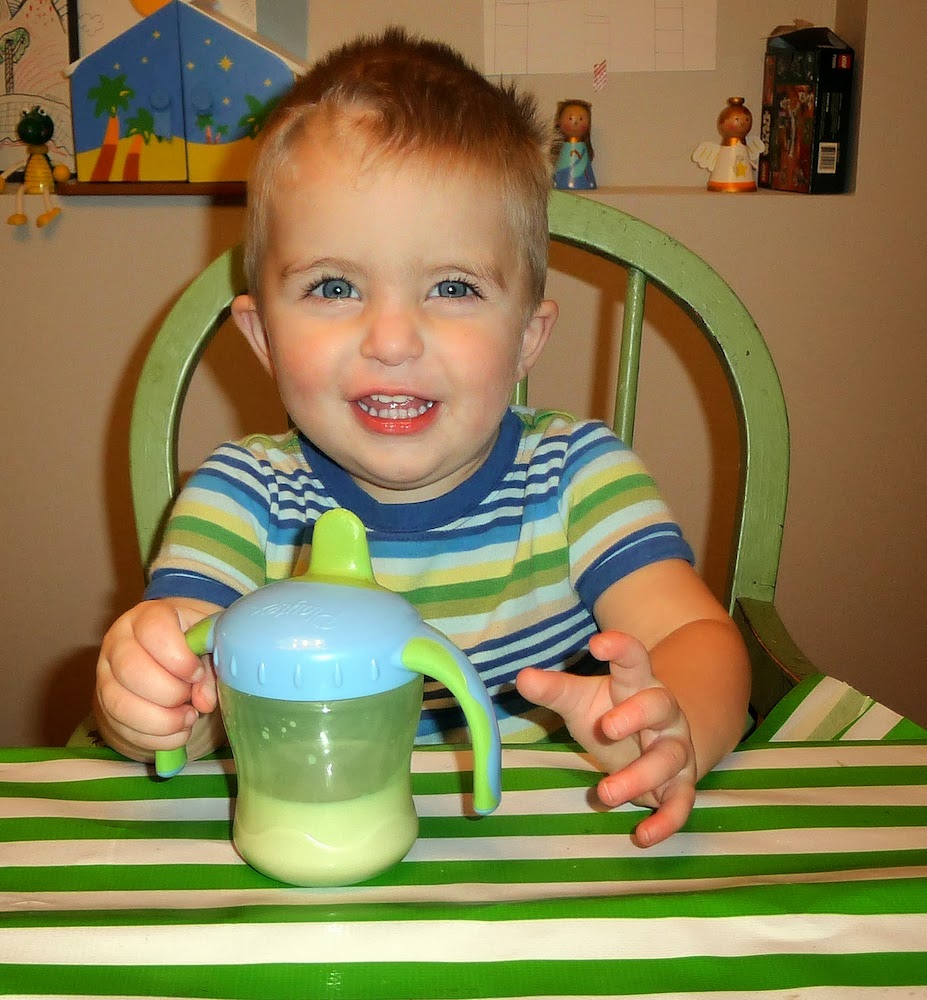 Gunner Cowlick, being effortlessly cute in one of the few times he wasn't trying to crawl all over the table. 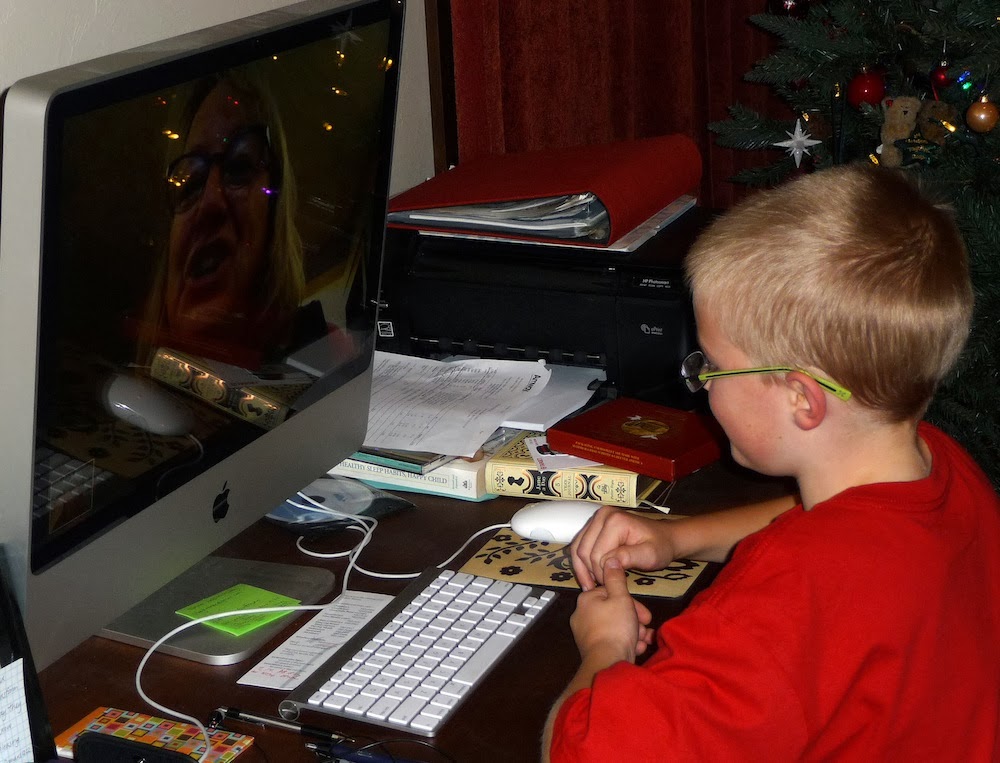 Christmas day Skype calls with some grandies and we counted it a very happy, successful holiday! 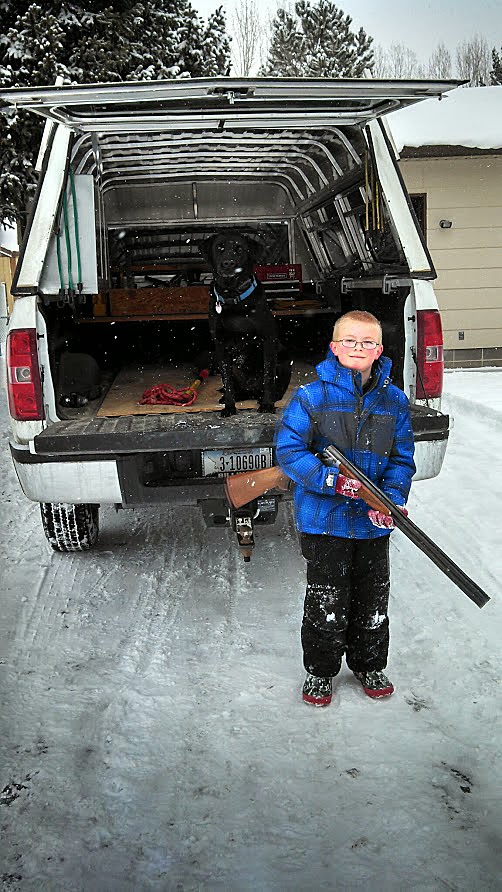 Sam and Blake, getting ready to shoot ducks on my parents' neighbors' back ditch. Such a little dude!

Christmas was great, New Year's was fine. I had a harder time in the week between and drank more wine than I should have. January passed quickly, with a trip to Spokane (not sure if I have any photographic evidence of it!) tucked in mid-way. We just got back from Calgary this week (I have one photo) after a wonderful five days where you couldn't be outside because it was colder than a well-digger's hind end. We played mah jongg, hand and foot, and dodgeball. Blake's mini-league basketball team won their tourney game last night, so we have another game to attend tonight. I had hoped they would lose by just a little and be out for the season, but I guess this is HIS Valentine's Day, too. Rob is showing me how much he loves me by cleaning out my car (and lo, my heart goes pitter-pat!), and Blake and I will bring home Little Caesar's pizza after the game. And there you go!
at 2:29 PM 4 comments:
Newer Posts Older Posts Home
Subscribe to: Posts (Atom)