even when my heart is breaking

My little friend's cancer has come back, and death is staring them in the face, only miracles and one slim clinical trial left for hope of life. Her mother wrote this last night:

And all I can do is pray, and hold my own children close, and cry for and with my friends, facing the impossible. I don't know what to pray for them, and my soul keeps going back to the Psalms, crying out to God:

Yea, though I walk through the valley of the shadow death, I will fear no evil,
for you are with me; your rod and your staff, they comfort me...
... Surely your goodness and mercy will follow me all the days of my life,
and I will dwell in the house of the Lord forever.
at 3:31 PM 1 comment:

She's healthy as can be, eating lots of baby food (still not QUITE happy about things with too much texture - she just gags) that I am making by the gallon (seriously, I made seven different varieties for her yesterday, at LEAST a quart of each), and finally sprouted tooth number two next to her first. She's very close to crawling, mostly because she gets so distressed if we walk away from her without, you know, taking her with us. We also have a friend with a baby that's about six weeks younger who has been crawling for a while now, zipping around Vesper like nobody's business. 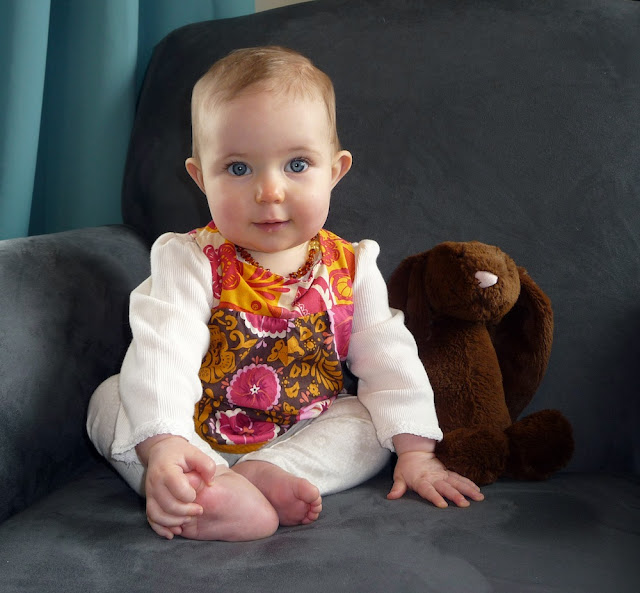 Eight months old, in a smock that Reese made for her! This also marks the last time she'll really sit still for these portraits. 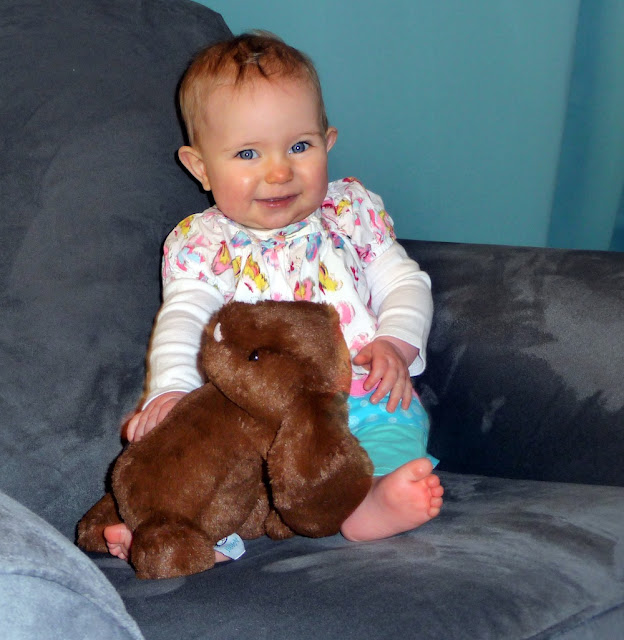 Nine months. Every time I would arrange EB (Easter Bunny) and sit back to take the picture, V would move the bunny. 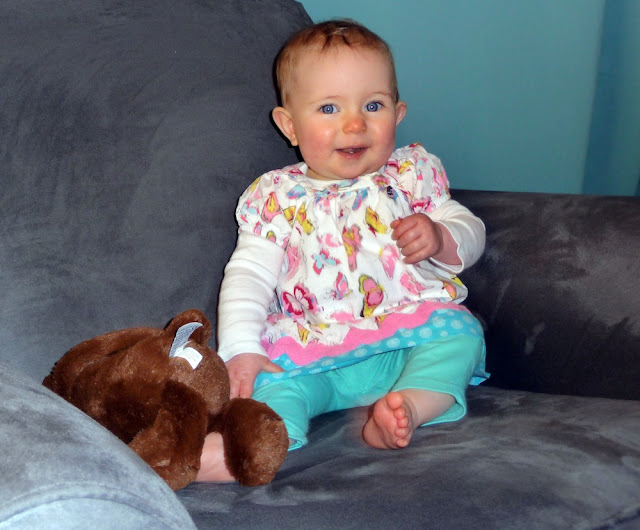 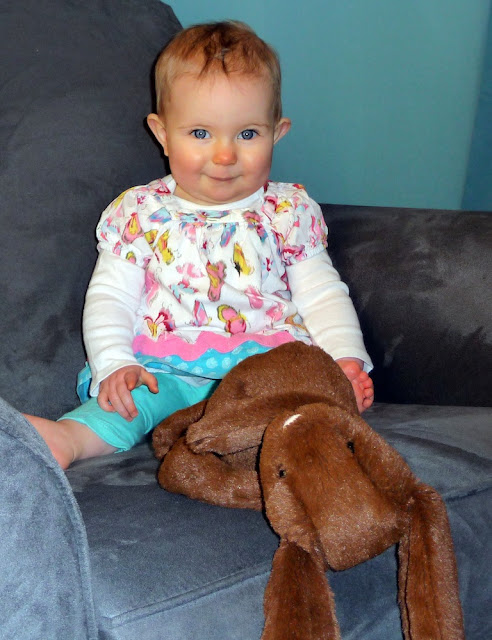 "Seriously. Just try to stop me."

So I called in extra help: 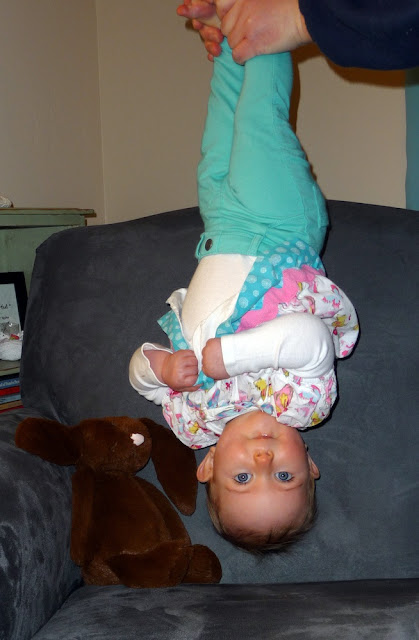 And the look on her face makes me laugh every time. She loves being upside down!
at 12:39 PM 4 comments:

has it only been four years?

Well, they've been some of the sweetest four years I've ever known. I can't believe how small Blake was when Rob found us, picked us up, and put us in his pocket to keep forever and ever. Vesper's so small you can't even SEE her in these pics. Amazing. 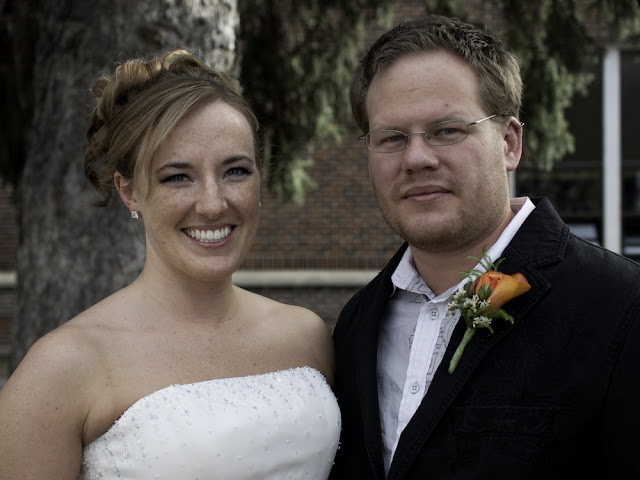 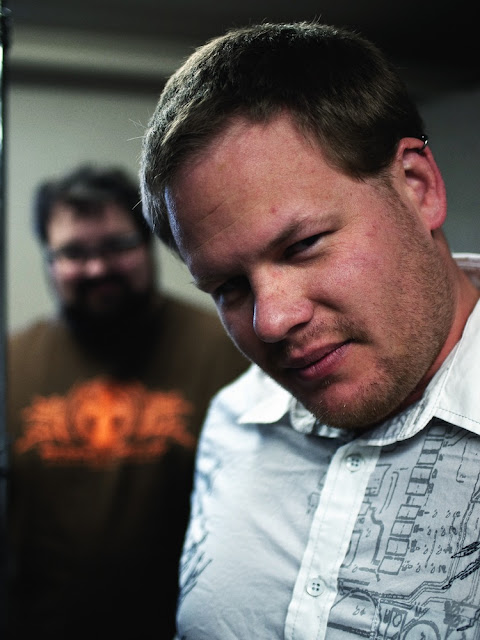 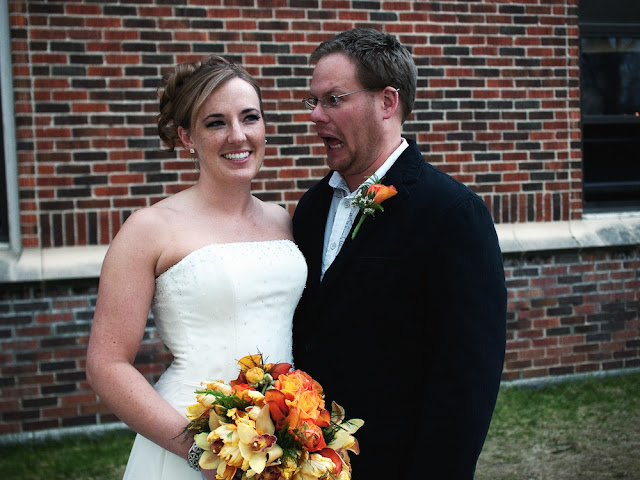 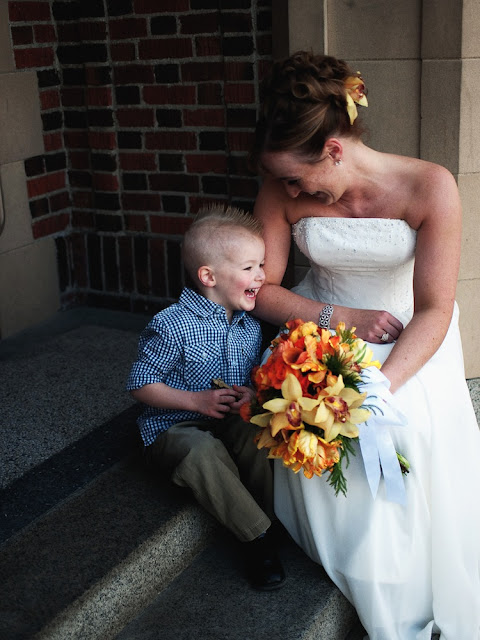 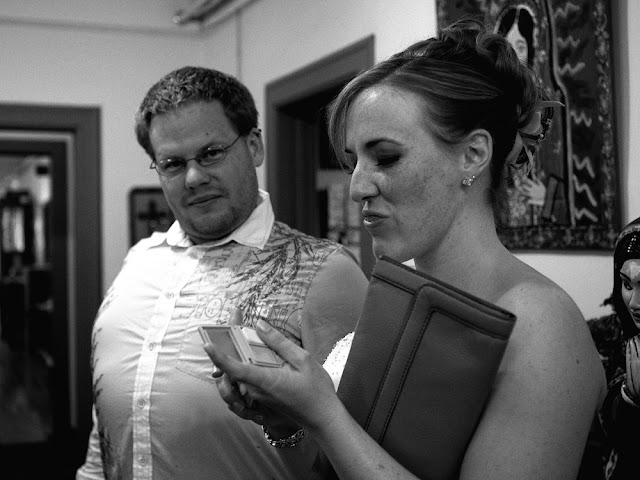 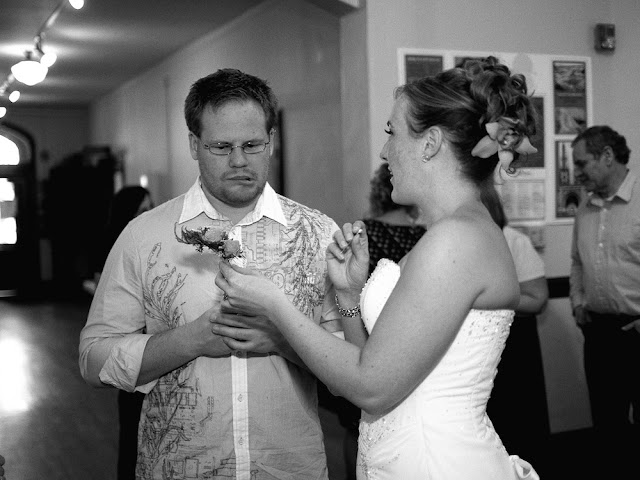 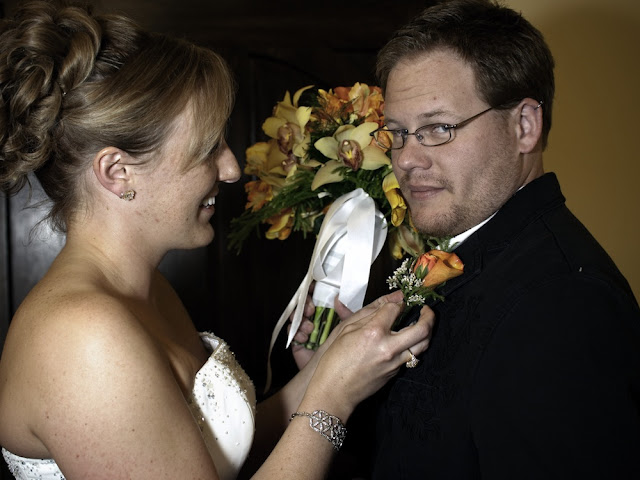 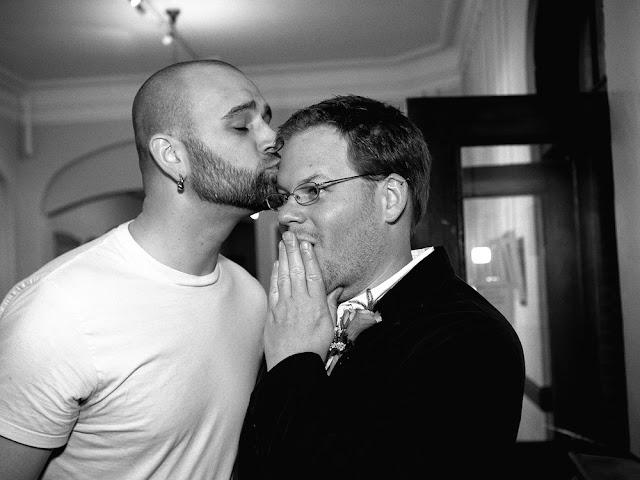 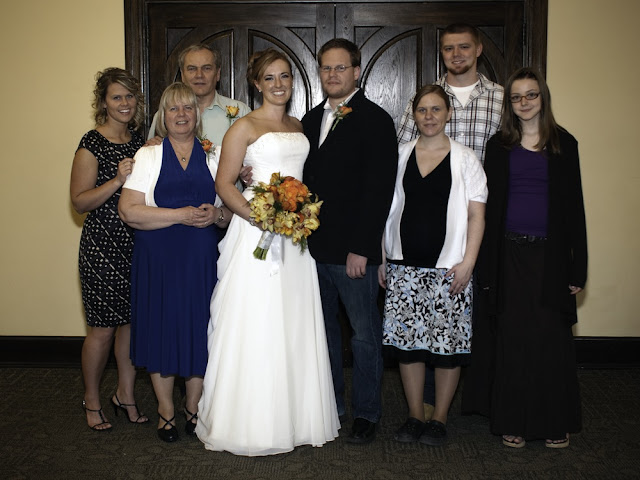 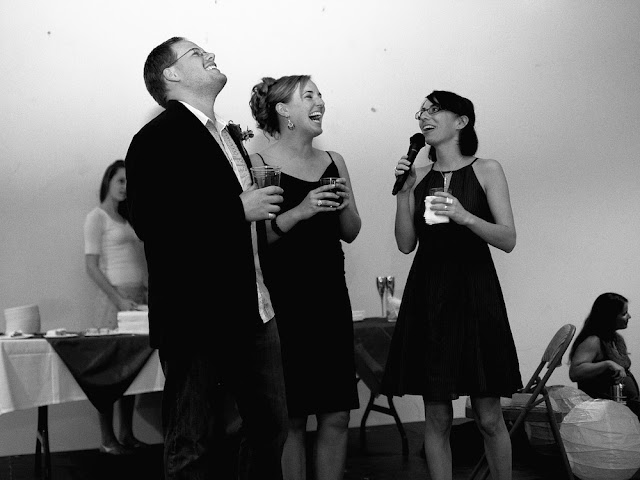 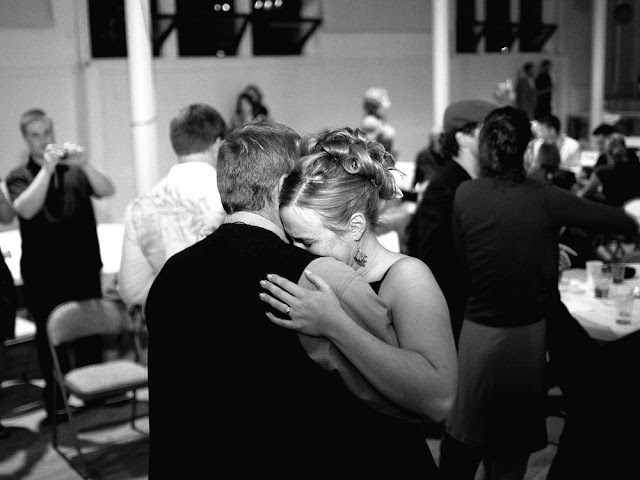 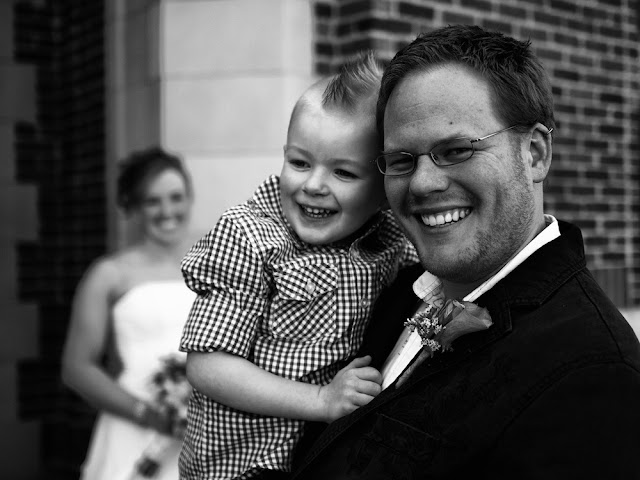 I suppose when I put it in the context of "It's been four years AND I HAVEN'T SEEN MY WEDDING VIDEO YET," it seems like a lot longer. Rob's been sternly told that he must charge steeply for all video editing that isn't of our own wedding... which means he doesn't do any editing at all. Sigh. One of these days years!
at 3:26 PM 4 comments:

My little friend has done pretty well this last week! Her second round of chemotherapy (part of a clinical trial) is done, and there hasn't been a recurrence of immature leukemic cells (blasts) in her blood. Praise God! She's also been cheerful, has been eating more, and has gained a little weight. Take a look at this sweet face and just try not to fall in love! 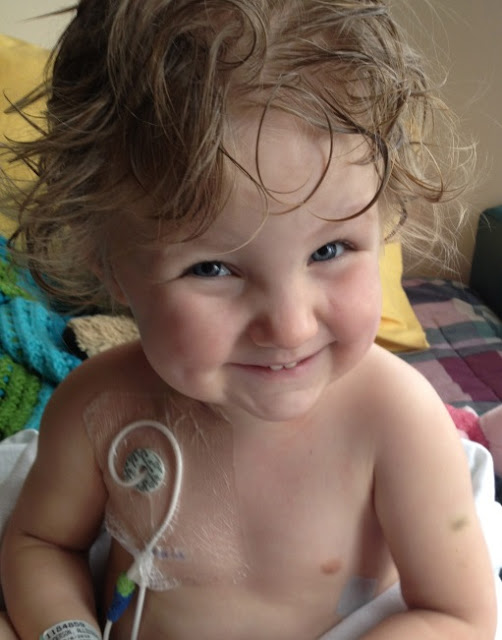 Unfortunately, she has RSV again, which involves an unpleasant anti-viral treatment that she loathes. Please pray for peace and effective healing, so that she can move into the transplant phase. There is still no end in sight, so while I'm rejoicing in the recent news, I'm still praying for miracles; for healing; for strength and comfort for the whole family; for God's will, grace, and love to shine over and above everything.

Our own small piece of good news that we hope will have big blessings for our family: tonight is Rob's last evening shift. This week, he starts with a new division at Oracle, one that both makes him more marketable in the long run AND has him working "normal" hours. I think both Blake and I will be most affected. Blake, because he'll get to see his dad for more than just a quick meal on Mon/Tues/Wed, and me, because I'll get to begin and end the day with my husband. Rob's schedule since marriage has been thus: freelance videographer (that is, unemployed), 50-60 hours/week at Vann's (making a pittance if sales were down), nights and weekends at RightNow/Oracle (we almost never get up or go to bed together, because his body's timetable is 4-5 hours later than mine). Unfortunately, this change comes with a significant pay cut - hopefully just short term - but we're confident that God will provide.
at 11:18 PM 1 comment:

We gave Blake ski lessons for his birthday. He was not very excited about this gift, but I told him if he didn't like it after five lessons, he never had to go again as far as I was concerned. Still, to honor big Blake and to at least ACT like we live in a location where the vast majority of the population are here because of the ski hills, he had to try it. When I was doing the paperwork to sign him up, I could only very lightly skim the disclaimer before signing it, because while I knew that his risks on the Snowflake run were minimal, they HAD to warn me about the very real dangers that can exist on the ski hill. It felt like a really big effing deal that I was even letting him put skis on, and that I WAS THE ONE BEING BRAVE, not him.

I got over it.

On the drive up, I answered questions and allayed fears. His primary worry was the chair lift: he'd never done it before, and he wasn't sure he could. I reminded him about our "practice" in the living room: sticking your butt out to let the chair scoop you up, then standing up to let the chair push you away from itself. We may have devolved from faux scooping into pinching each others' biscuits, because you just have to.

By the end of his first day, the lift went from his most anxiety-producing aspect to his FAVORITE aspect, and MOM, NEXT WEEK, WE GET TO GO ON A BIGGER ONE! My heart almost burst to see my little man riding the lift alone. The pride was mixed with a wistfulness that wasn't helped by turning to see a man who looked remarkably by big Blake walking by. Course, everyone looks like everyone else with that many layers on.

At the end of his third week, there was a miscommunication that had him ride a new lift, expecting to see friends waiting for him at the top. They were not there, and the adult and child (from class) he asked to help him down left him. His last run of the day was marked by largely rolling down the hill, after my friend had called in ski patrol and tried to help stem my mounting terror. Blake finally appeared, covered in flecks of snow, in tears, and exhausted. We called off the patrol, I burst into tears, and we talked about his circle of safety, how he had gone outside it, and covered some rules for skiing alone and with friends. At the end of his fourth week, when the class went up that same lift and found a safe and easy route down, he proudly announced to me, "Mom! I had so much fun! I think my circle of safety got bigger!"

And, for Poppa Cec, video proof: 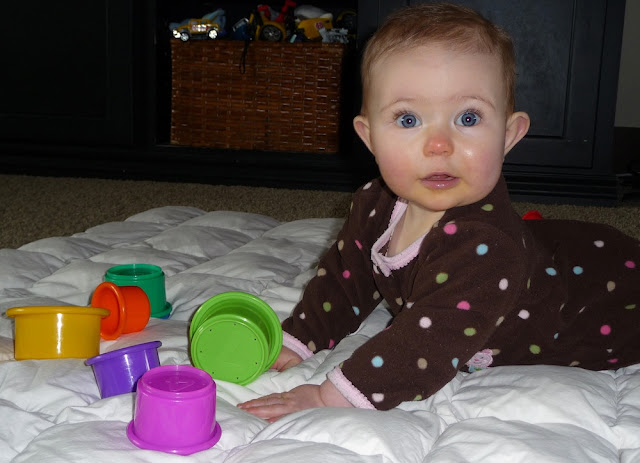 Tummy time! V is still mostly immobile, but she's finally started making moves towards scooting and rolling. At this point, she pivots around her belly button and gets angrier and angrier as she goes. You can see her carotene glow these days, as she's a big fan of carrots, sweet potatoes, and squash. 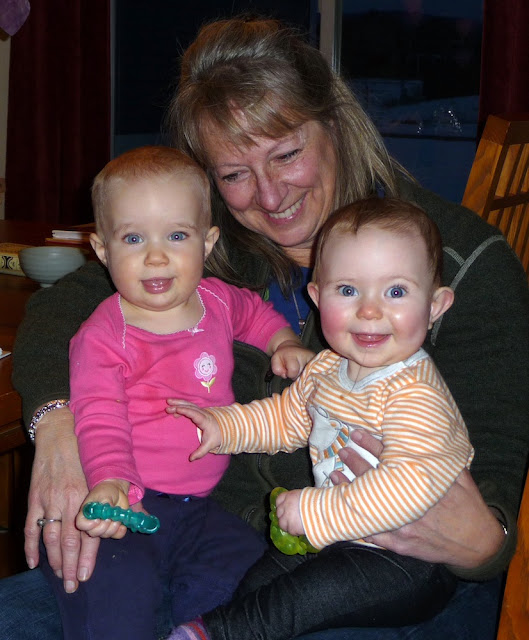 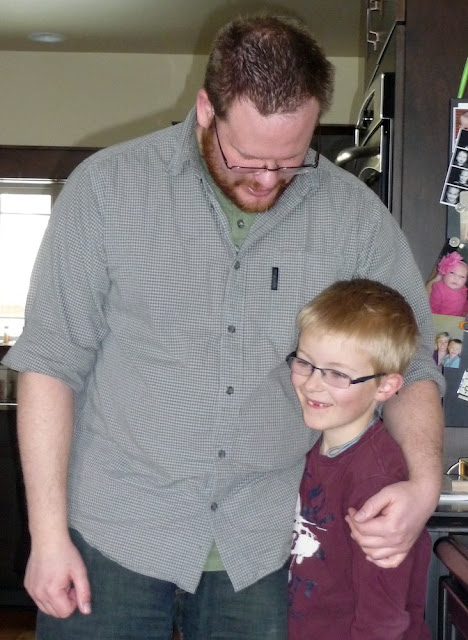 I don't really know what's going on here, but there was a moment, and I had my camera handy. I love these guys. 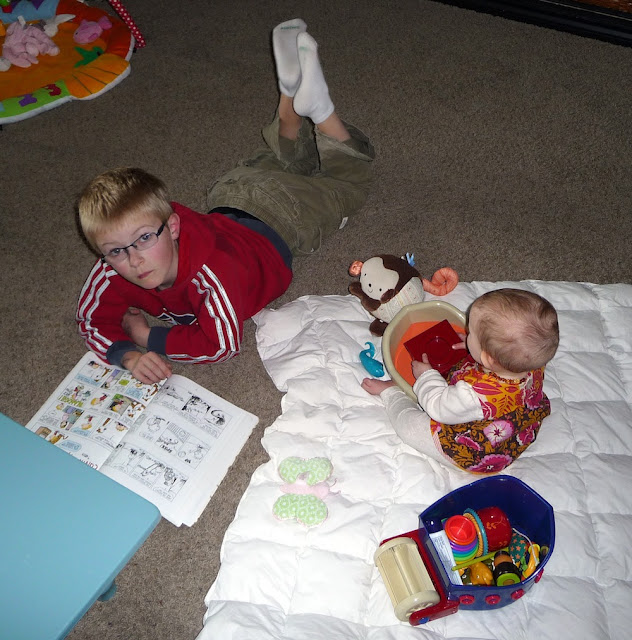 "Mom, can you put Vesper to play on the floor so I can read next to her?" (Yes, he reads Calvin & Hobbes. Trying to explain the ones he doesn't understand can be tricky, but his vocabulary is growing by leaps and bounds!) 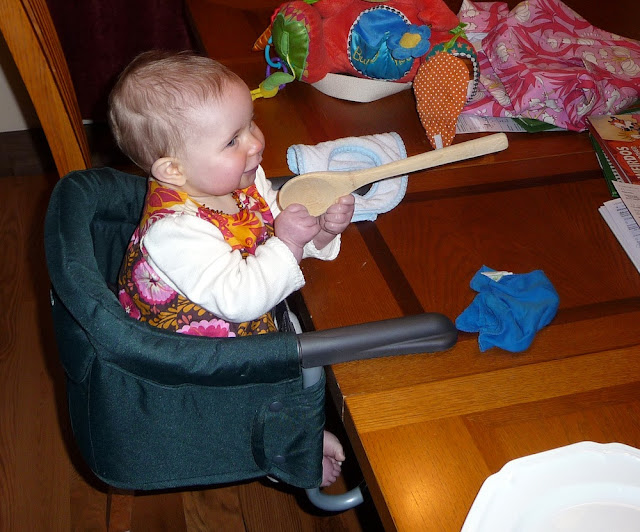 Blake is teaching her well: she's already turning a regular household object into a gun... 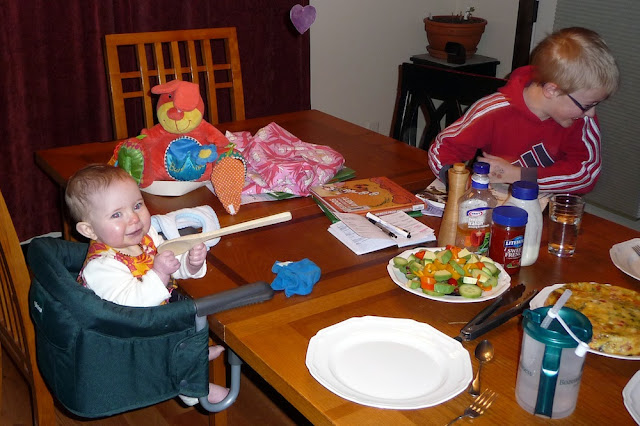 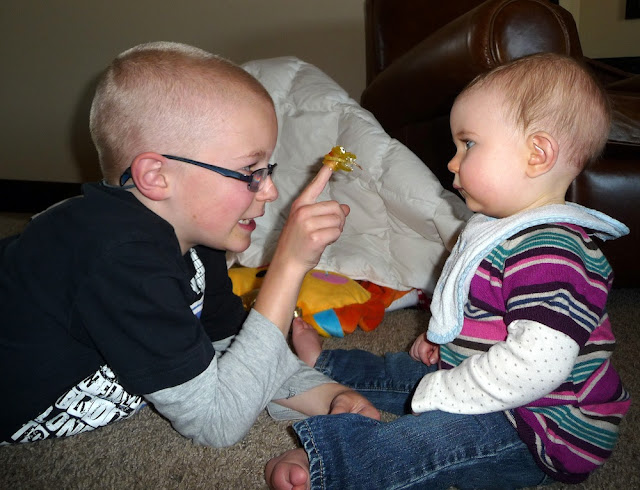 That enormous child on the left used to have a profile very like that wee baby on the right. He's grown lean and tall, with big awkward teeth that don't quite fit his mouth yet, feet that seem outsized, and cheeks that aren't chubby and round any longer. But, and I love this more than I can say, he still walks alongside me and gladly holds my hand. 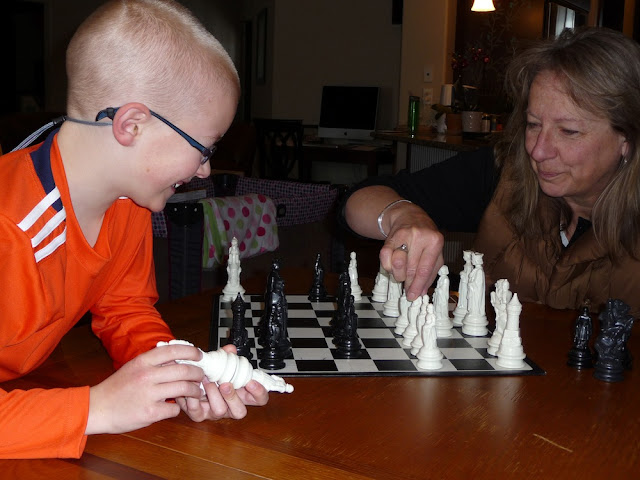 A neighbor taught Blake to play chess, and Blake then taught Grammie. While it's painfully easy to beat him, it's darn near impossible to LOSE to him. He's got the rules down, but strategy is something else entirely! 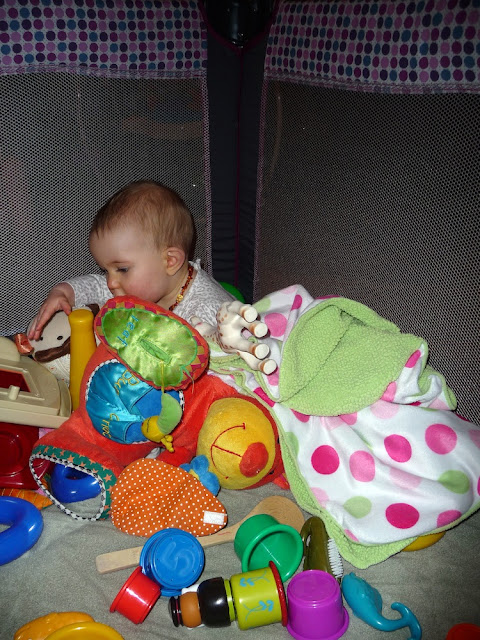 Little miss contented: we keep her Pack-n-Play in the kitchen area, stocked with toys, so she can be nearby but not underfoot. Blake wanted to move everything right where she could reach it very easily, which meant it was all practically on top of her. 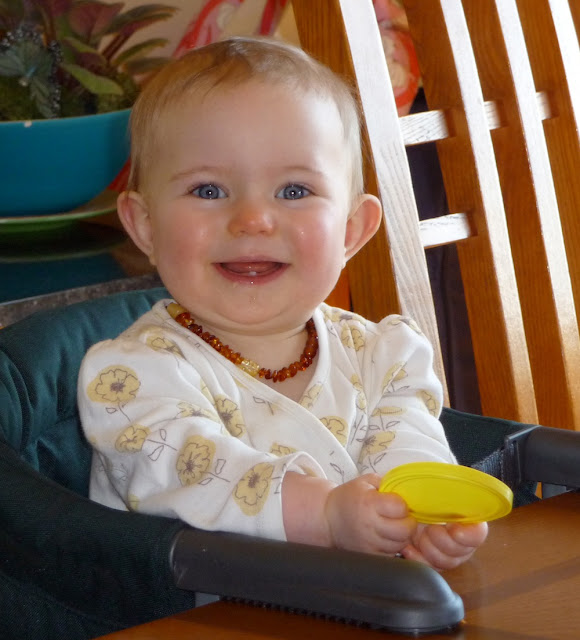 She's talking more and more, and has finally said her first identifiable and deliberate word: Uh-oh!
Babbling of "dadadada" and "mamamama" continues, with Blake gunning hard for "babababa" to make it into her rotation. 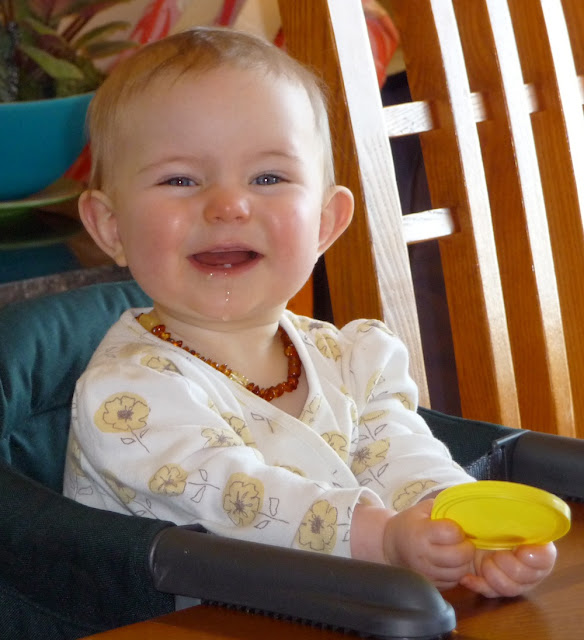 Silly happy girl is very drooly, because another tooth is hoping to join her first. 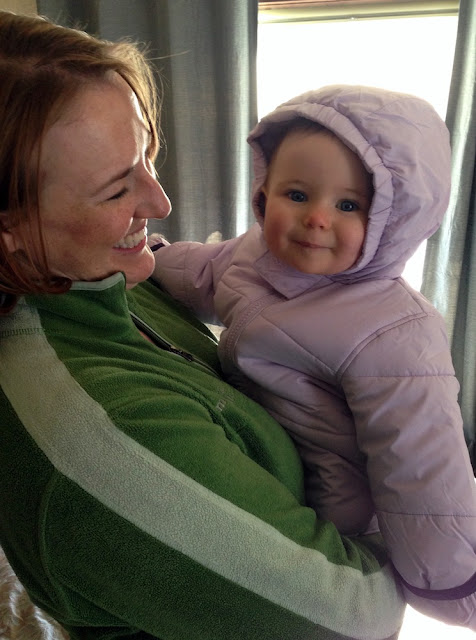 We took a walk to feed the ducks. She studied them closely, but was quiet as a mouse until I started quacking at her, too, which she found hilarious.
at 11:39 AM 2 comments:
Newer Posts Older Posts Home
Subscribe to: Posts (Atom)