I'm rather ill, alternately coughing up a lung or blowing my brains out via my nose. I got B to school, then slept until after 1:00 pm today, missing half of his Fun Run in the process.

The owners of the condo are coming by with their parents tomorrow afternoon, and it's definitely looking "lived in" at the moment.

Can anyone help with taking B or just tidying or even feeding us?

I ordered pizza. A friend is taking B tomorrow after school. Another friend came by to help with bedtime and tidying up. I've been diagnosed with an airway infection and am now on heavy antibiotics and an inhaler (which makes me jittery). I'm to double my intake of water (it was already good) and get more rest.

I slept until 1:00 PM today after dropping Blake off at school. Not sure how much more I can actually get, but I'm willing to try. Those naps won't take themselves!

for the curious who won't ask

Nope, we're not pregnant yet. My silence on the subject doesn't necessarily mean that we are. I wrote a longer post just now that was WAY TOO MUCH information for all but a very few friends, so suffice it to say that my body is still working out what normal looks like.

This could take a very, very long time.

HAHA! It's funny if I say it, but mean if you do. And still, marvel at my restraint. I do have boundaries!

Right now, I'm trying to see it as each month God makes us wait is one more month of time: time with my job (in a time of transition, this is a big help!), time to help with the house without feeling ill, time to travel to an important graduation in May without risking labor and delivery half-way there. As one friend put it, no matter when, the time will be just right. She's a voice of wisdom for me, for she was barren for two years after her miscarriage (after two healthy kids and even with fertility treatment). It was really difficult for her. She's now well into her second trimester and sees how any earlier would have been too early. So that's how I want to see it: not as I think the timing is right, but as God sees the timing is perfect. He's much better at this sort of thing than I am anyway!

My new mindset might not keep me from taking pregnancy tests, though.

This made me mildly uncomfortable, then made me laugh and laugh.

B: I LOVE ROCK N' ROLL! So put another diamond in the juicebox, baby!

*****
B: (muttering: Paint your smile) ON YOUR LIPS!
(muttering again: Blood red nails) ON YOUR BAG OF CHIPS!
Shot through the heart and you're to blame!
You give love A BAD NAME!

*****
A: You know, for the longest time I thought "Rock the Casbah" was actually "Rock the Cats Paw," and I thought it was an unusually sleepy bar to gain such reknown.
R: You're kidding.
A: I wish I was.

Stir together until well blended. Use immediately or freeze (stir regularly while cooling so the butter doesn't separate). We like it on waffles or French toast, but it can also top cakes or go in hot cereals.
at 4:39 PM 2 comments:

Click on a photo to see a bigger slide show. 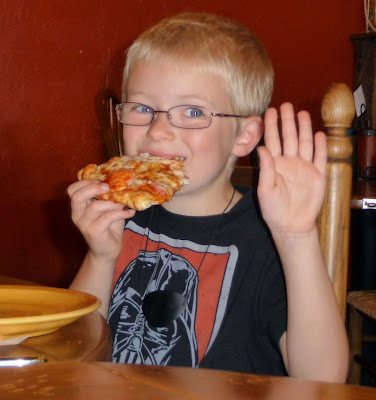 nice to meet you! i'll try not to ruin your day.

It's officially autumn per the calendar, but also per my schedule. Blake's in school again with a new teacher, I'm in a new Moms in Touch prayer group, and I'm in a new Bible Study Fellowship class. I first really ran into the following phenomenon last fall, then have realized it is going to be a regular part of my schedule, so long as I persist in meeting new people and doing new things: I get to share my story.

My story is also my testimony to how God worked (and is still working) His grace in my life. And I have to remind myself to use the term "get to share" rather than "have to share." Because my story is not a simple one, nor particularly happy. And though I can chat about big Blake with folks who already know my story with barely a tear (most times), there is something about introducing that history to folks who have no idea what sort of emotional sledgehammer I'm about to whack them with... it's very difficult not to be overcome with emotion myself. There are invariably questions if I'm not thorough, and even if I want to skip over big Blake entirely and just be a the single mom who met a great guy only three years ago... I can't.

I can't deny God's story in my story. I can't dishonor my late husband by trying to omit him from anything, and it seems that everything that impacts me spiritually revolves around what I learned from that tremendously traumatic experience. I don't always feel like I'm able to honor Rob with as much story time as I give to big Blake, but perhaps that will come with more years behind us.

So I tell the whole story. How happy we were. How we were on the cusp of many great changes and in a new place. How he died doing what he loved with friends and family who loved him. How pregnant I was and how I managed to survive (I don't remember - or have blocked - much, mercifully). How our son shares his name and was my saving grace and little buddy for years as we prayed together for another saving grace named Robert Alan Bedford, though we weren't aware of that name when we prayed.

And I have Kleenex mini-packs in my purse at all times. They are for me and whomever I'm meeting, tenderly trying to show them "me" while not ruining their day nor minimizing the pain of what God's tenderly brought me through. I've usually used them all up by Christmas, when I seem to meet a fresh batch of people and pop a new pack in, just in time for anniversaries of things, Christmas carols... and avalanche season.

This could go for environmentalism-as-religion too. I have more of those pushy followers in my life than I do pushy atheists!
at 12:34 PM No comments:

the most beautiful hole in the world

Rob and I planned to spend Labor Day together as a family, since B has the day off school and summer fled far too quickly. I had proposed a few different, short hikes, mostly up by Hyalite Reservoir, and we agreed to do one or more depending on the energy in one boy's legs. Last night, when I told B of our plans, he was enthusiastic and excited, then upped the ante by asking, "Can we take a bike ride on Sour Cookie Dough Trail after the hikes?!" (For the non-locals, he meant "Sourdough Trail.")

Though I initially answered a hopeful, "Maybe!" to the above question, our trip to Grotto Falls took over four hours. We came home, ate, showered, and swept him to bed. HOWEVER, the reason it took so long was lovely: based on new knowledge graciously given by my friend Nichole, I now know what huckleberries look like. I treated the entire hike like a treasure hunt, and we not only found huckleberries, but raspberries and strawberries as well. If you've ever had a wild strawberry, you'll nod with vigorous understanding when I say OH MY GOSH! They are tiny and intense jewels of summer. 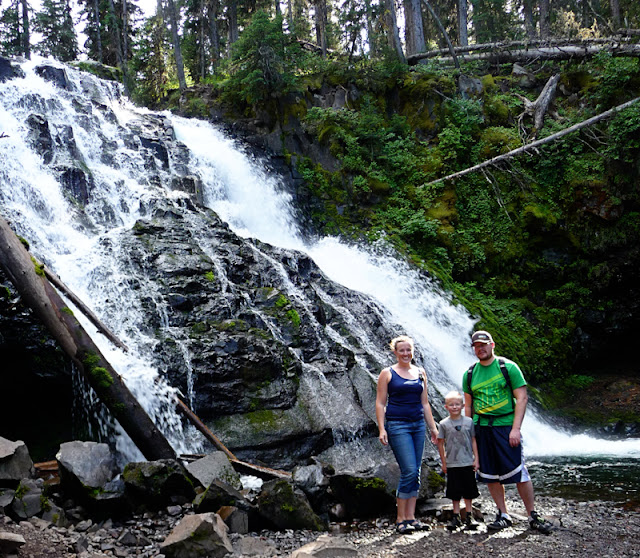 I got to share my new knowledge with no fewer than three sets of people. After a bit of playing around at the falls, I even got to show a nearby father's three kids what the huckleberry tastes like. I'd step off the trail and it was though my legs were instantly surrounded by kittens: "Can I see it?" "Ooh, that's a big one!" "Which ones are the huckleberries?" "That one was SOUR!"

"That one" was a chokecherry.

The youngest boy kept insisting we find cranberries (he meant raspberries), while the older boy and Blake teamed up joyously, and the daughter and I chatted. We never got around to shaking the father's hand, and the youngest apparently wanted to talk both of Rob's arms off, but we enjoyed a leisurely stroll back to the parking lot, finding a surprising amount of mouth- and hand-staining fruits to occupy our time.

It was such a great day.
at 9:08 PM 3 comments:
Newer Posts Older Posts Home
Subscribe to: Posts (Atom)