This morning, on my way to Bible study, road construction forced me to merge into the left lane. I put on my blinker and expected the car in my blind spot to slow and let me in. Instead, the driver accelerated so abruptly that it was clear to me she had no intention of such a courtesy. In fact, I was surprised to see that her plates weren't from California. The truck behind her graciously let me merge. I waved to him, then made eye contact with the woman who was now immediately in front of me, via her rear view mirror.

Very matter-of-fact, I calmly told her she was a bitch and flipped her off. To her credit, she did not respond in kind.

As we sat there, stopped at the light, I was hit with a wave of contrition. I had just sinned against someone in a fit of pique, and I would have no chance to make it right. I could confess to God and ask forgiveness, but as soon as the light changed, I would have no chance to do the same with this stranger. I thought about hopping out, tapping her window, and quickly apologizing, but decided against it. She might have thought I was insane or violent, and it could have made the problem worse. I sadly reflected on my terrible witness of God's love on the way to Bible study, for crying out loud, and why "casual" sins made in passing can be so harmful, with no chance for redemption with the offended.

We proceeded through the light, and I watched her turn into the parking lot where Bible Study Fellowship is held. My face turned bright red as we drove past one another in the parking lot. I was walking down the hall, telling my friend Jill the story, when I saw her: the driver in green. Approaching me.

I veered off and stopped right in front of her.

"I owe YOU an apology! I was totally not paying attention!"

"That's not really sinning against me, though, whereas I had a temper tantrum that was totally uncalled for. Can you please forgive me? I'm mortified."

"When I saw you turn into the lot, I was really glad I would have the chance to apologize, but I was really embarrassed, because of COURSE I was headed to the same Bible study as a woman I had just flipped the bird."

Later, I finished telling Jill about my morning, concluding that God is both gracious to let me confess and seek forgiveness as well as a bit ornery to let me learn my lesson in such a pointed way, and she laughed and laughed. "Oh! I have to tell my husband. That is such a classic Addie story!"

Bethany claims these are Vesper's vocal warm-ups. I just held the camera up until she ignored both it and me and started singing again, despite not having cleaned her up after dinner (there were blueberries involved, which she loves). She's gotten a lot more verbal lately, and will even cry briefly in protest when she's put down for a nap. Just like a normal child.

Because I have a pile of things looming that I don't want to deal with right now, I'm blogging instead. Tomorrow (maybe even later tonight!), I will bemoan my choices and wish vainly for more hours in my day and more sleep in my nights. What can I say? It's how I roll. 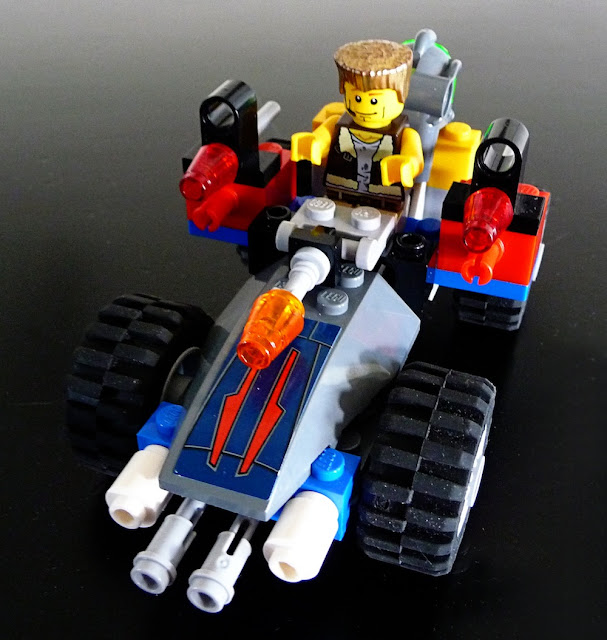 How Blake rolls. "This is a 2X3 Destroying Machine. This buggy is very powerful and can destroy a building with one missile and one bullet. Say that, Mom."
"Okay." 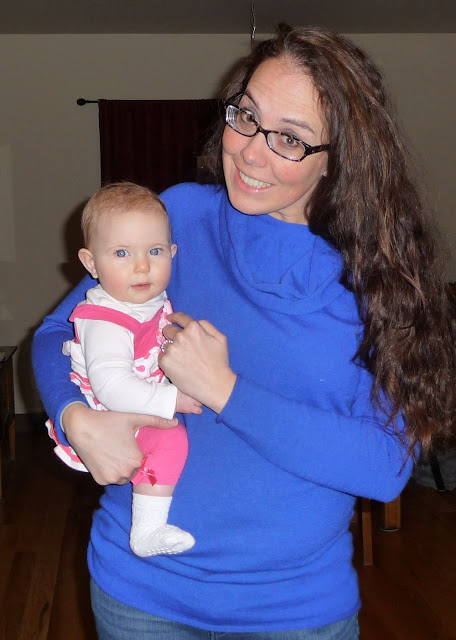 V and T. T's fiance lived with us for the last five weeks and just moved out today. While Blake is glad to get the armory back, Rob and I are a little sad we didn't have more game nights. Guess they'll have to host US in the new apartment! (Terra, that is a hint. I'm not sure how clear I have to be...) 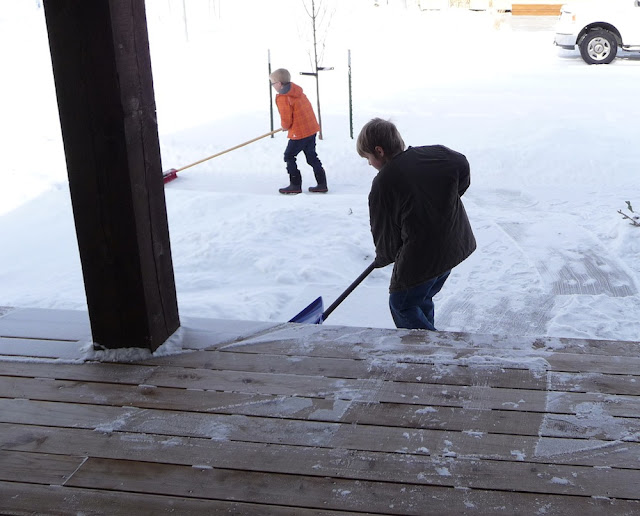 Blake and Gunnar wanted to play video games, so I negotiated. Blake LOVES shoveling, and hurried outside to complete his chores. Gunnar looked at me like I was joking.

I was not. But Blake was pretty fast, so I think Gunnar only had to do the porch and steps. 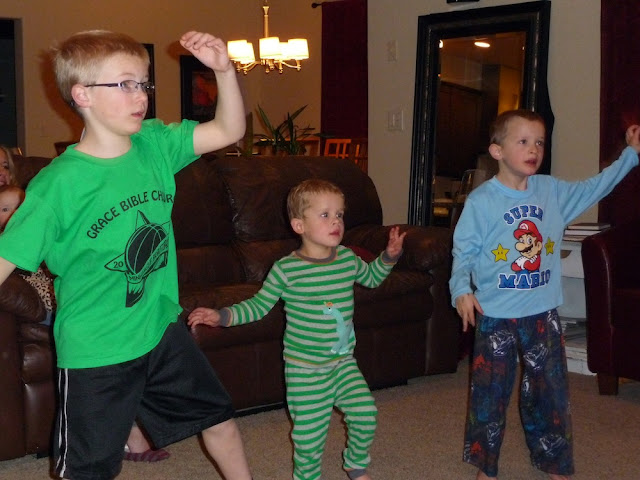 Warning: if we have you over for dinner, we'll try VERY hard to rope you into playing Just Dance 4 with us. Pictures are usually verboten (as my friend Jared put it, "What happens at Addie's stays at Addie's"), but Blake, Joel, and Kale were too stinkin' cute to resist. 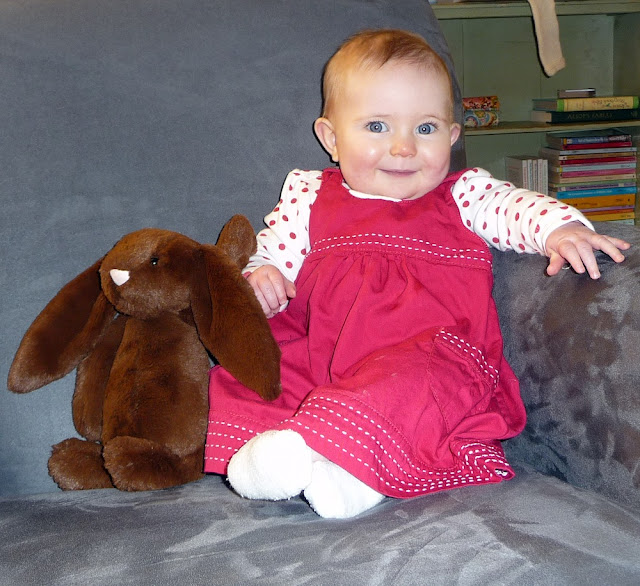 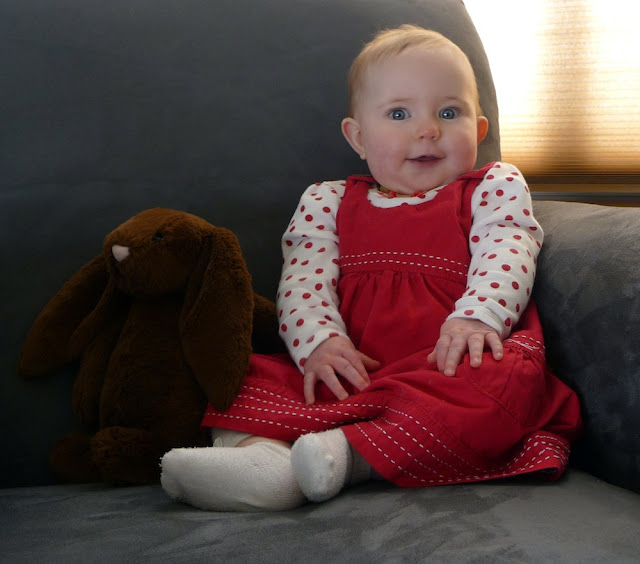 I'm already trying to figure out what to put her in for her 8-month photo. 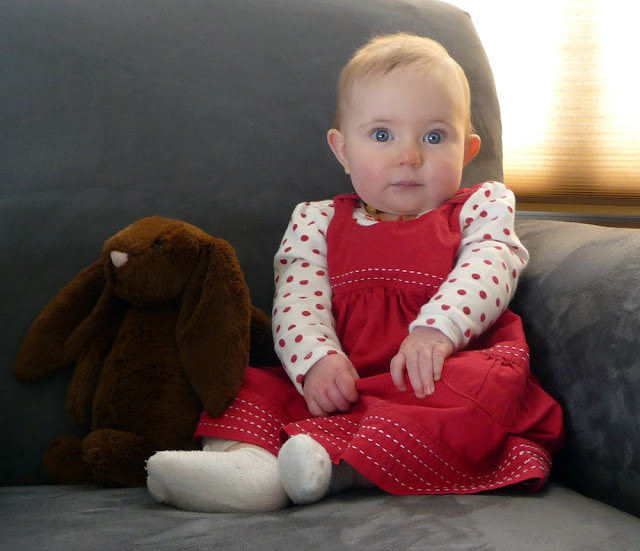 She's about to sprout two teeth on the bottom, likes to scratch things (my desk and couch both have damage from nails that were a fraction of a millimeter in length), and seems to be happiest when diaper-free. 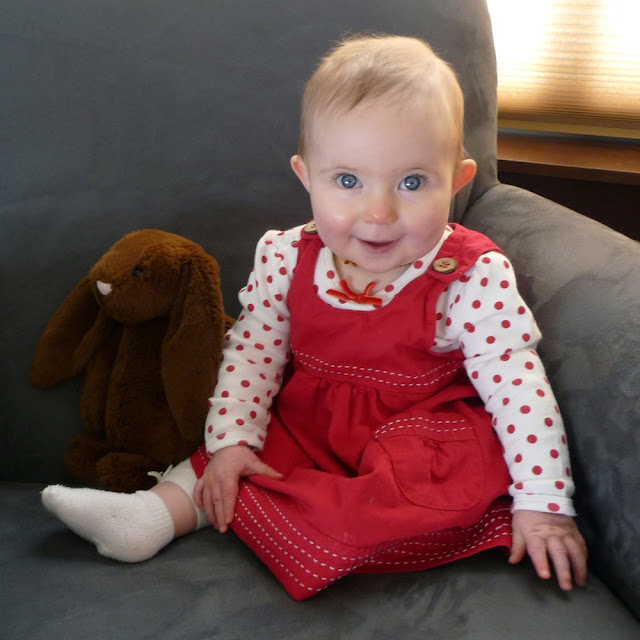 She's still remarkably uninterested in rolling over or being on her stomach, the lazy little bean. One of these days she's going to figure out she's mobile-ish, but until then, it's awfully convenient to find her right where I last left her.
at 7:25 PM 3 comments:

eight's going to be great

I interviewed Blake this morning over cereal. Apologies for the sound quality: the heat was blowing and the humidifier was on high, plus Blake's not as close to the mic as I am. Still, he's a sweetheart.

we have a room we call the armory 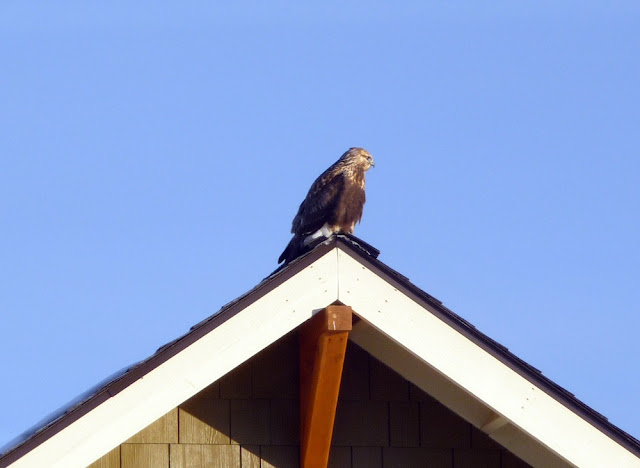 Look at this beautiful raptor on my neighbor's house!

I don't know what it is. But I love it. I wish he would come say hi to me, because I would buy live mice just to feed him. We have a bunch of varied raptors around, because we're still in the middle of a field and the hunting's good. I need to get better at identifying them, but they need to get better at holding still longer first. 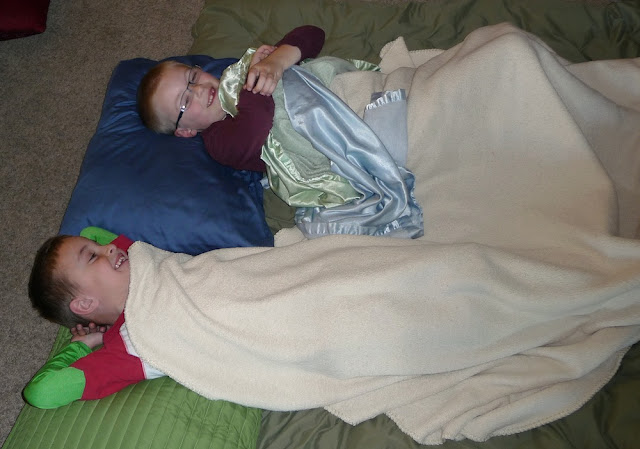 Reese needed a place to stash Mason for a few hours. I don't remember why. I told them to cuddle up and they could watch some America's Funniest Home Videos. I remember watching that when I was quite small, and you know what? 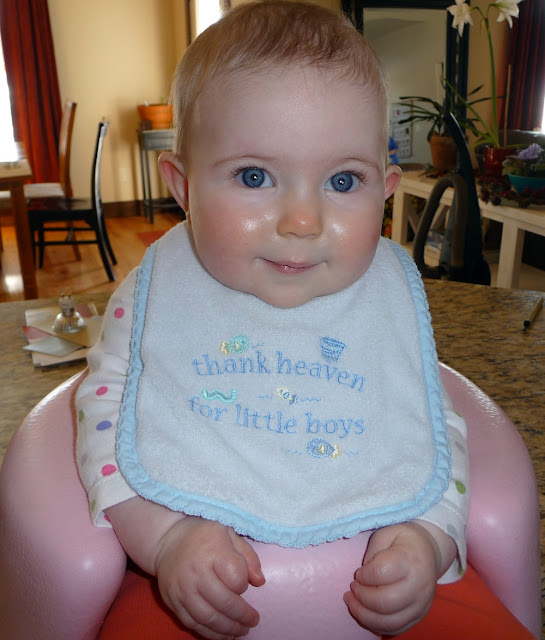 Like this one. Rob does not approve of this bib, even though I told him I had no intention of buying others. Blake needed a CRAP TON of bibs when he was small because if it wasn't copious drool, it was copious spit-up. The kid was always giving back...

Which means I have a few bibs that make Vesper look like she's already on the prowl.
Rob still does not approve. 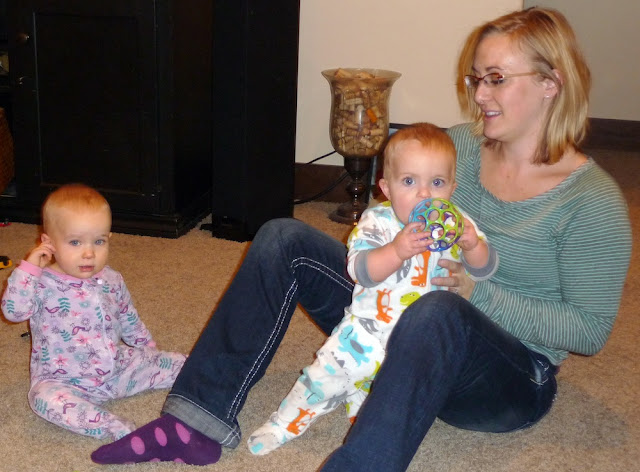 We hosted the Perrines overnight just after Christmas! Audrey, on the left, is now one (not in this picture, but now, as of 1/25) year old! Gunner, in Lane's arms, will be one on 2/12. It is crazy how quickly time flies. Also, that urn of corks in the background? The dust on the rim is striped with tiny finger streaks because Audrey wanted to explore. After about the third time of rescuing the baby from the decor (or the decor from the baby), Lane said, "You know you have one of these too, right? You'll be moving this eventually?"

Hmm. Maybe. Or maybe MY baby will be so used to it she ignores it. I'm terrible at baby-proofing, mostly because I am very lazy (one might also make a case for me being a lush, because those corks represent a lot of consumed wine!). And I want my children to know that you don't play in the knife drawer no matter WHERE you are. But mostly I'm lazy. 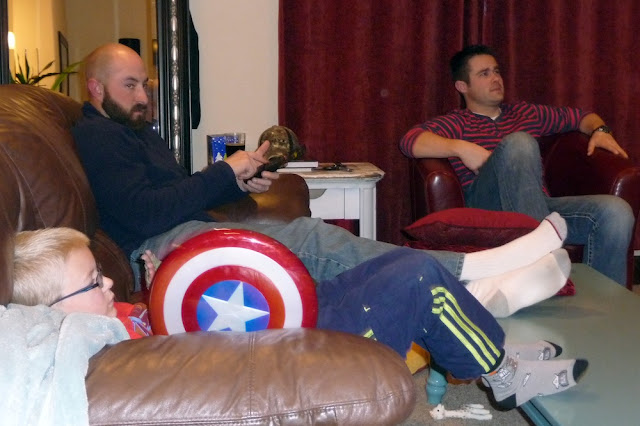 I don't know what they were watching, but none of them look very pleased. Well, to be fair, Matt usually looks like that. 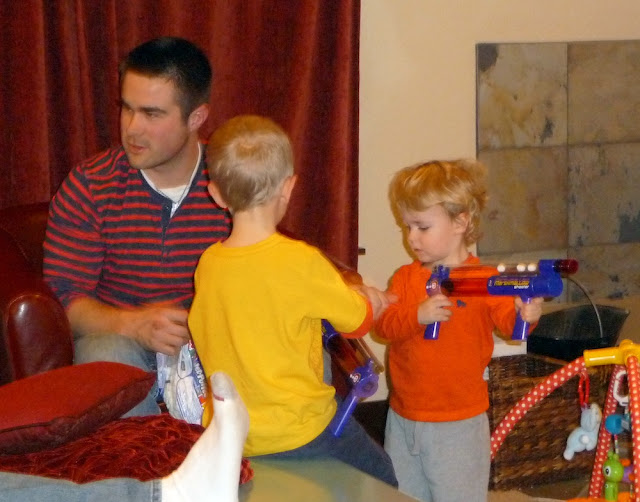 The Schuylers gave the Perrine boys marshmallow shooters for Christmas. I am STILL finding mini marshmallow nuggets in the most random places, because Blake got one too. When I find them, I throw them away. When Blake finds them, he works on loosening even more teeth by eating them. 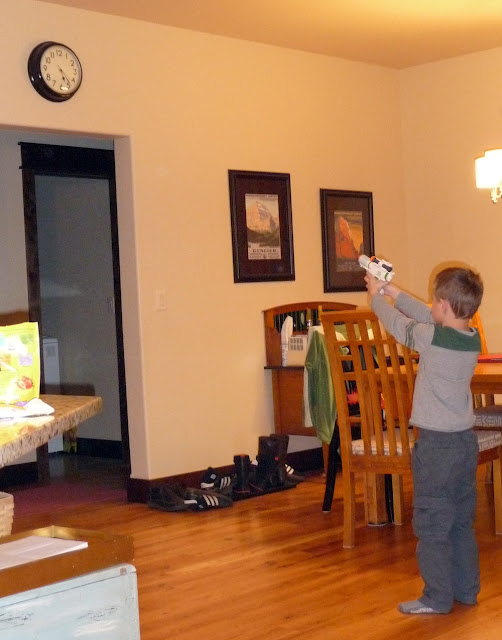 So, I'm serious about having a room we call the armory. When we refer to it with guests, it's simply the guest room. When we instruct boys on how to clean up, we tell them to put all the weapons back in the armory. I'd say we're the most well-protected house on the block, but these boys play fast and loose with what's considered a target.

My clock, for example, with the suction cup Nerf darts. 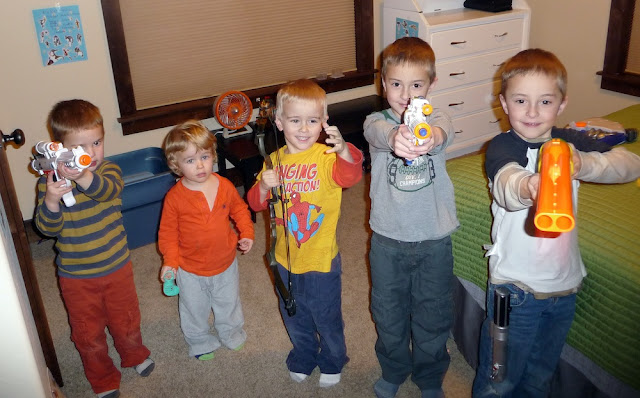 JUST after I snapped this, Mason let fire with both barrels of the orange shotgun you see on the right.
I took two to the chest.

But I have to say, that is the risk I run with nephews that I've essentially armed to the teeth.
at 9:20 PM No comments:
Newer Posts Older Posts Home
Subscribe to: Posts (Atom)