I ordered up a 35-lb box of lemons from Bountiful Baskets this week. Despite figuring out how to share it out with two other friends, I'm still going to have A LOT OF LEMONS to process, use, eat, etc. Plus I offered to share some lemon recipes with those same friends, so they wouldn't be overwhelmed too. I like to use both the juice and the zest of citrus, when possible. I am cheap, and I will wring every last usable drop out of those suckers. To that end, I have a microplane for zesting, as well as a zester if I actually want curls of zest, plus a vintage glass juicer.

*****
Mint Lemonade (can also be made with limes, and is my favorite summer drink)
Combine 2 cups of the water, the sugar, and the chopped mint in a small saucepan. Bring to a boil, stirring often, until the sugar has dissolved. Remove from heat and let stand 10 minutes. Strain out the solids and discard. Combine sugar syrup, remaining water, and citrus juice in a large pitcher. Serve over ice, garnished with mint and fruit slices. Get fun and add alcohol, if you're not pregnant.
(recipe adapted from Martha Stewart)

*****
Watermelon Rosemary Lemonade
Bring sugar and 1 cup of the water to a boil and add the herbs. Cook on medium heat until sugar dissolves. Cover, remove from heat, infuse at least one hour. In a blender, combine the lemon juice with the watermelon (in batches) and blend each batch until blender is almost full of mixture. Add the herbed simple syrup 1/3 cup at a time, until the mixture is the desired sweetness.

Take 4-5 pint-sized Mason jars. Add 1/2 cup cold water to each and fill the rest of the way with watermelon mixture. Cover and shake to combine. Garnish with an herb sprig and lemon slice. For a nice cocktail, add a shot of vodka or gin.

OR: Freeze mixture in popsicle molds as is (do not dilute).
(recipe given to me by Molly)

*****
Lemon Curd (this is how I use the vast majority of my lemons)
Mix all ingredients in the top of a double boiler and cook until thick and custard-like. Cool and refrigerate or freeze.
(recipe almost exactly as given to me by my mother. If you need more detail on how to properly cook a curd until done over a double boiler, let me know in the comments.)

*****
Delicious Dip (like tzatziki)
Whisk together everything but the cuke. Grate the cuke on the large holes of a box grater. Squeeze it dry inside a clean cloth or a pile of paper towels. Stir in it and serve.
(from an old magazine - WonderTime, I think)

I also really like to use the zest in these Lemon-Sugar-Crusted Blueberry Muffins (Mel already typed up the recipe with pics, so just use her site!), and I never make these without doubling them. Finally, I think I'm going to try this Strawberry Lemonade Concentrate, because it sounds delicious, and if I can it properly, I can use it for end-of-year teacher gifts.

Now I'm beginning to wonder if I need to order another box next week, just to cover all my lemony bases...

the kids have an announcement to make 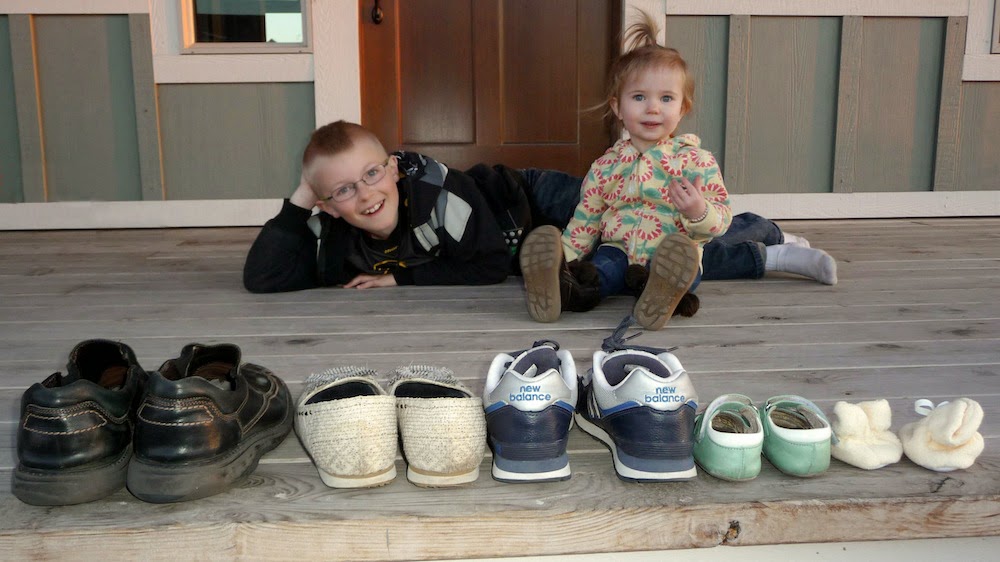 They anticipate an arrival in October!

My announcement? After taking this photo, I realized Blake's feet are almost as big as mine.
at 2:21 PM 1 comment:

I am on FIRE! Some of these photos are old. Months old. But some were taken as recently as this weekend, so I win all the things. All of them. Go ahead and deliver them to me. 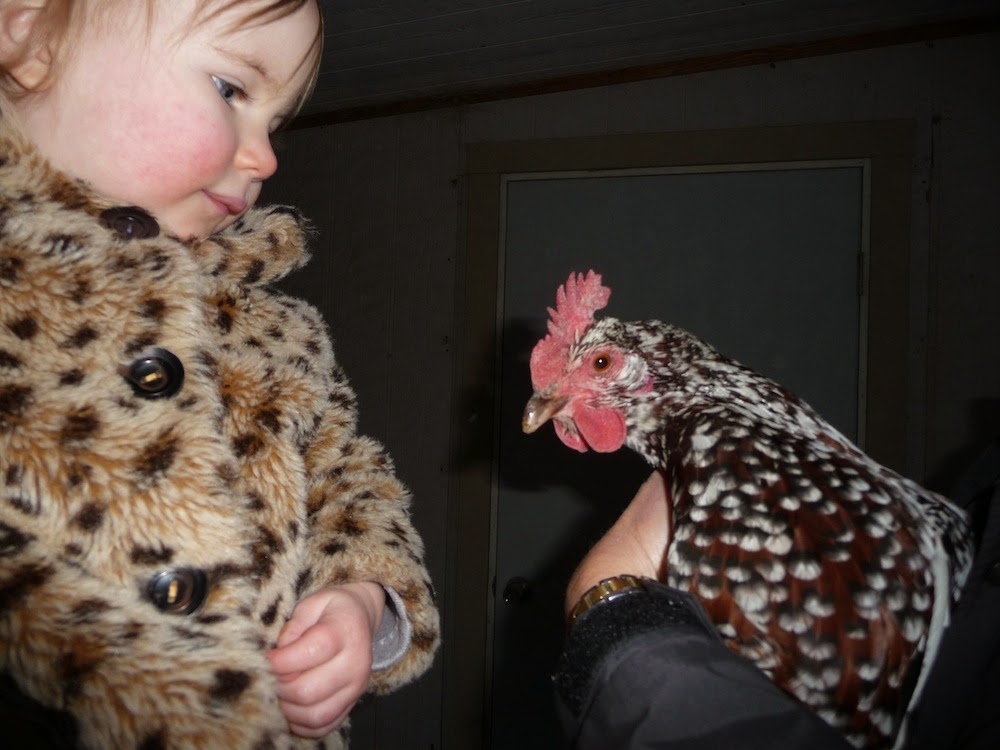 Vesper, meeting one of Grammie's chickens. She's not quite sure at this point. 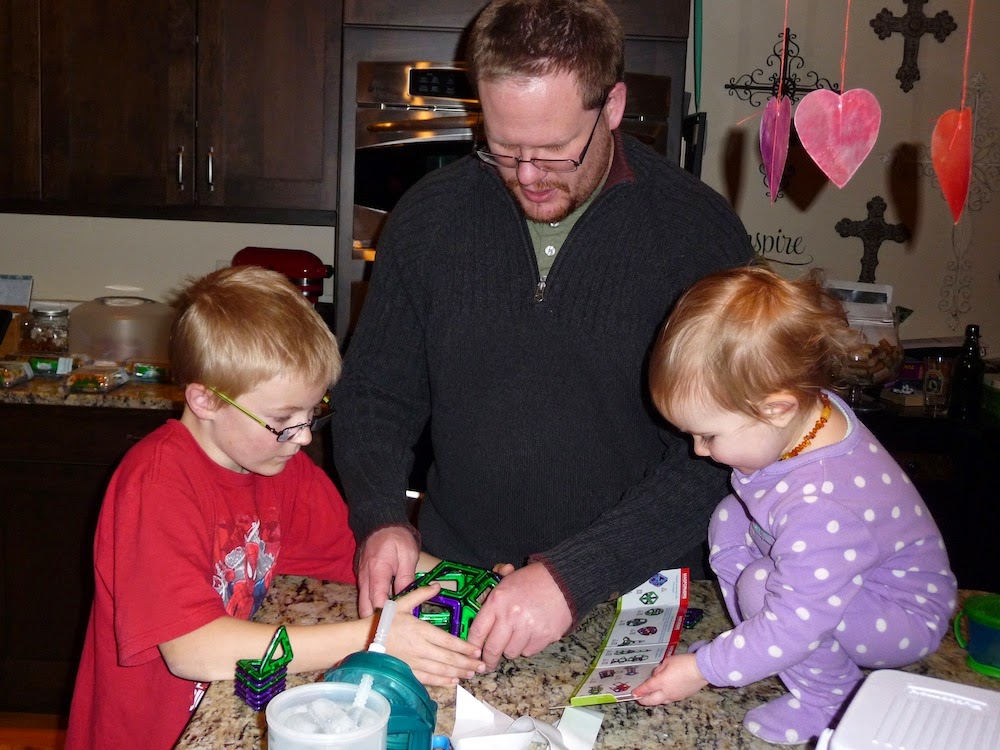 Birthday dinner for Blake, Rob, and me, plus a prezzie for Blake. My hope was that Magformers would be hard to lose in the car, since we were driving up to Calgary later this same week. His hope was that he could exchange Magformers for the LEGOs he actually wanted. We feasted on sushi from Safeway, of all places, and it was delicious, and Vesper loves it, and our sushi-loving family might have to stick with the goods from Safeway from now on, because that stuff gets pricey fast! My children and their champagne tastes... 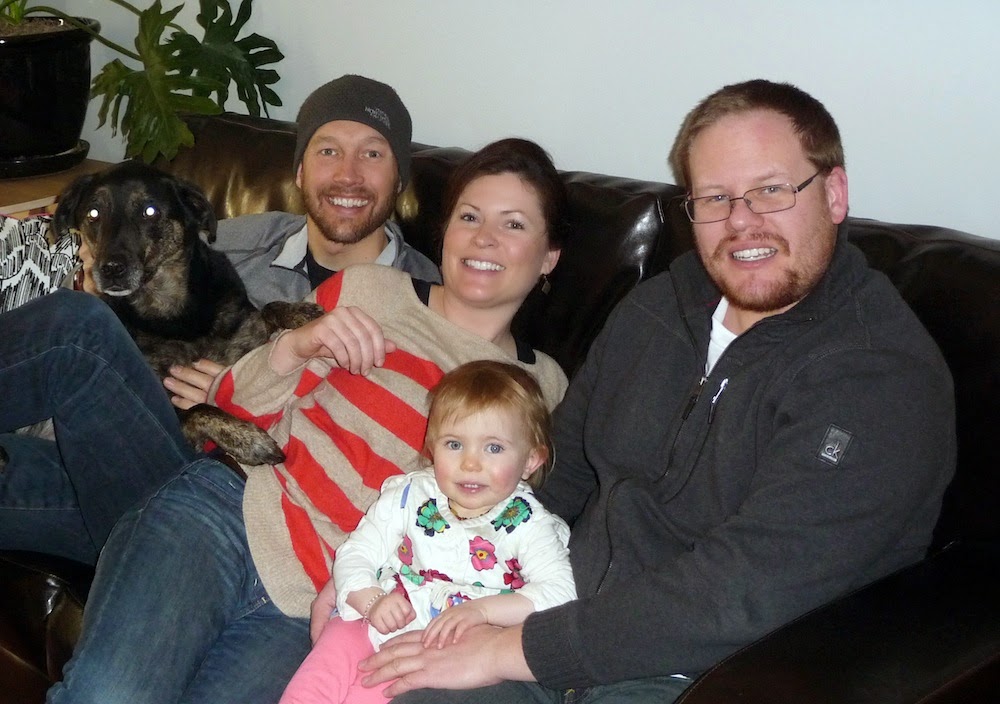 My one photo from our time in Calgary. One. I am lame. But we had a wonderful time with Grammie G, aunt Ernie, and uncle Dan. We got to see the LEGO Movie in 3D, visited Ernie and Dan's new-to-them cabin, lost Rob's wallet, ate a variety of authentic ethnic food that's not available in Bozo, played lots and lots of cards and mah jongg, and sampled lots and lots of the wine and craft beer we were given for our birthdays. It was pretty much amazing. 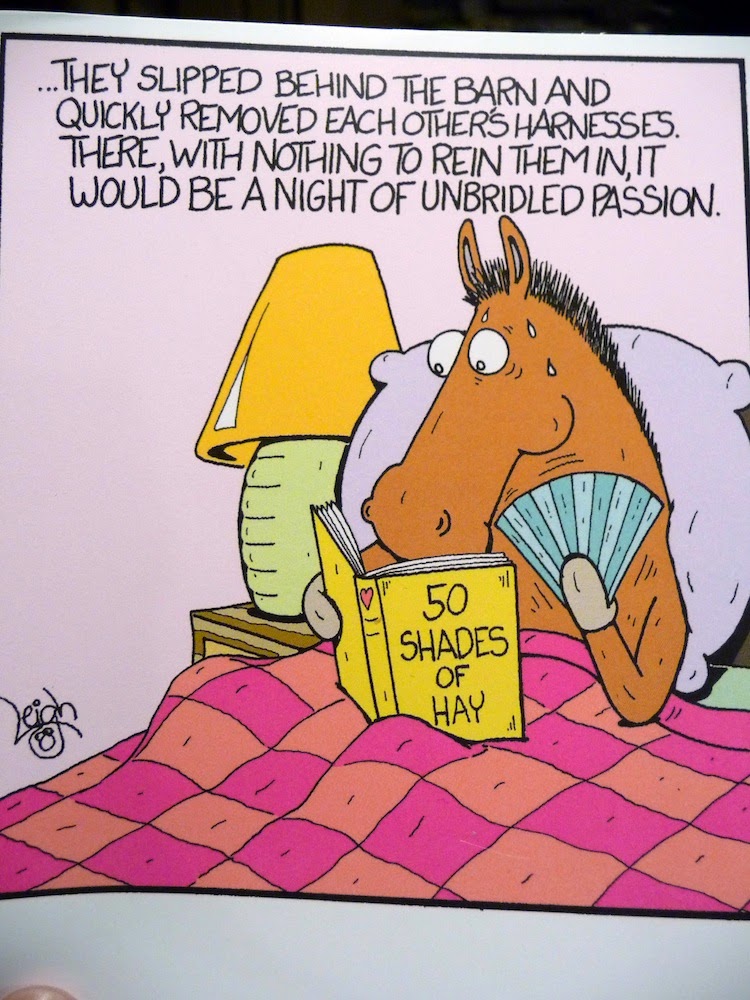 My birthday card from my mother. The one who likes to pretend to be regularly scandalized by me, when she knows FULL WELL that she is where I get it. 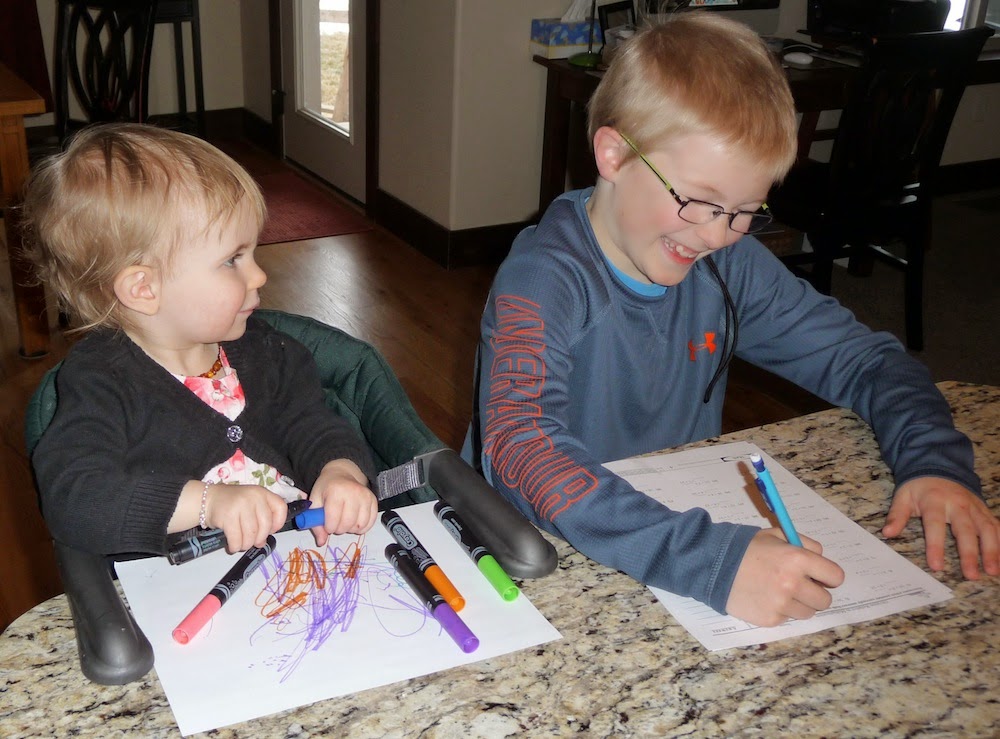 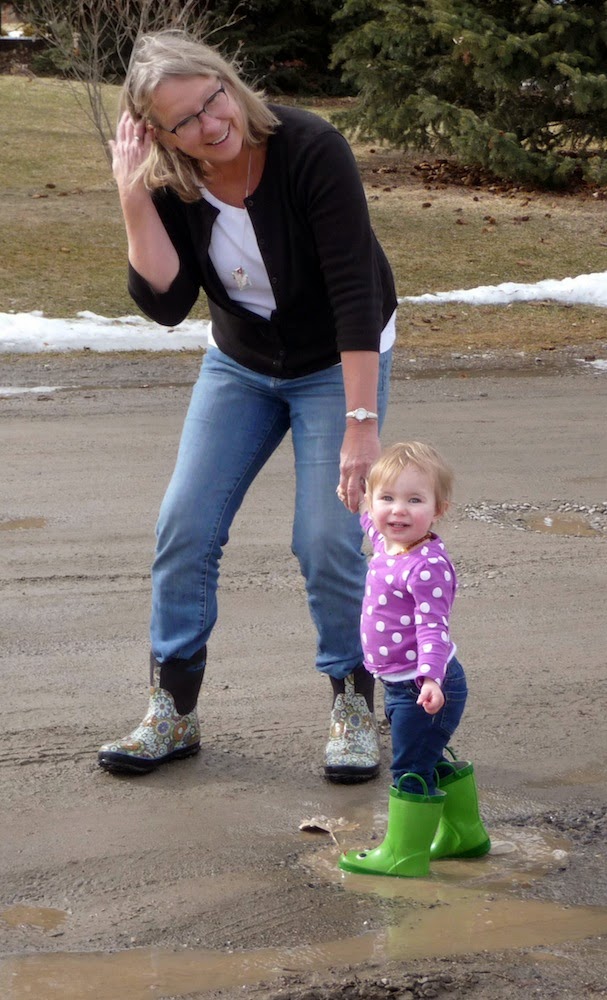 On our more recent trips to Billings, it's been warm and melty, and Grammie pulled out these too-big boots so that V could stomp in the puddles. And stomp she did. All she wants to do at Grammie's house is go walk. As in, "Here, we go walk," as she grabs your finger and tries to lead you outside. And she's perfectly content to circle the house over and over (so far), but we don't trust her alone, because in Bozeman, she also likes to cross the street swiftly and unaccompanied, or poke around in the dog poop-ridden, rodent infested back lot. 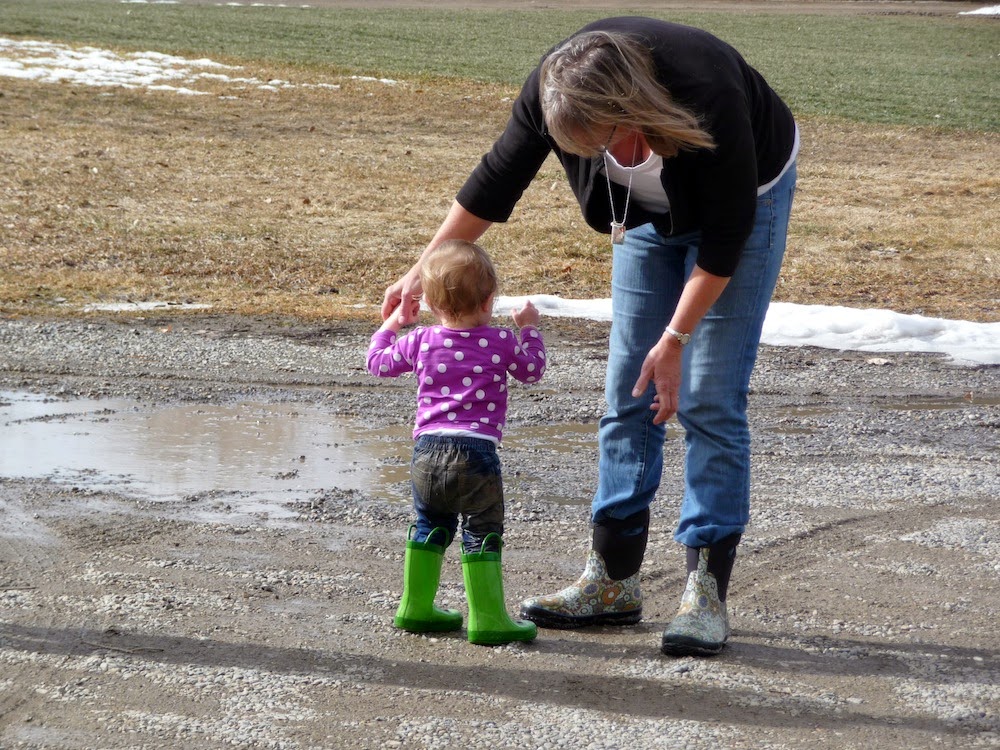 Despite my efforts at keeping her from sitting down in a puddle, Grammie had no such compunctions. 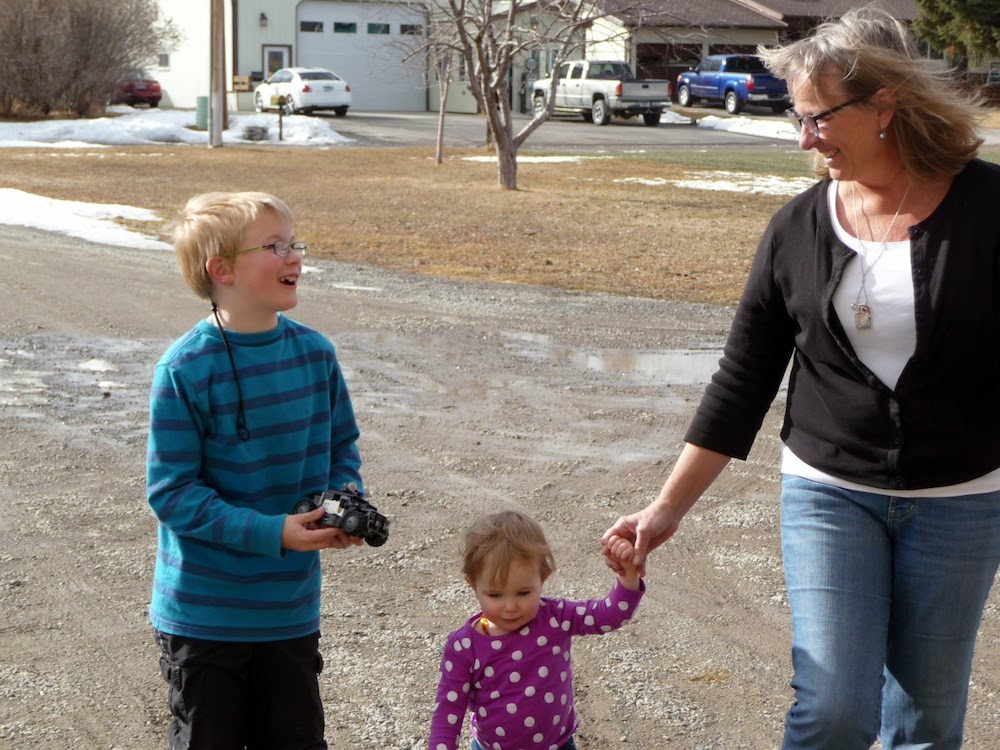 She's pretty much the kind of Grammie I want to be when I grow up. Universally adored, tons of fun, totally engaged with her grandies. 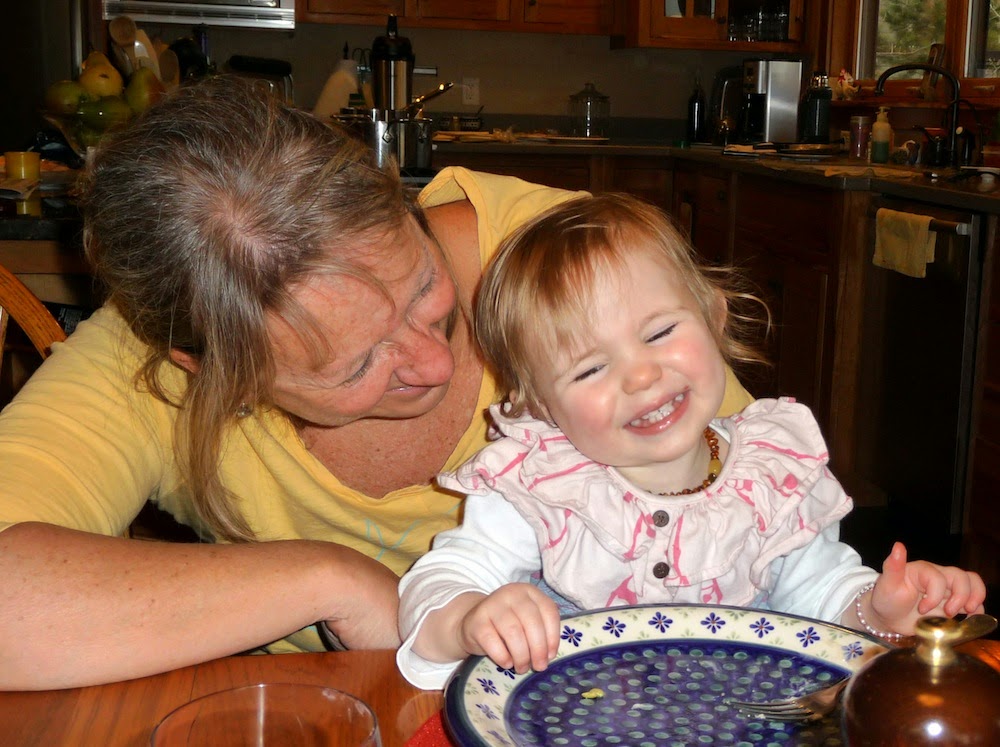 Squishy smile. I'm chopped liver when we're at my folks. V knows she's got Grammie wrapped round her finger. 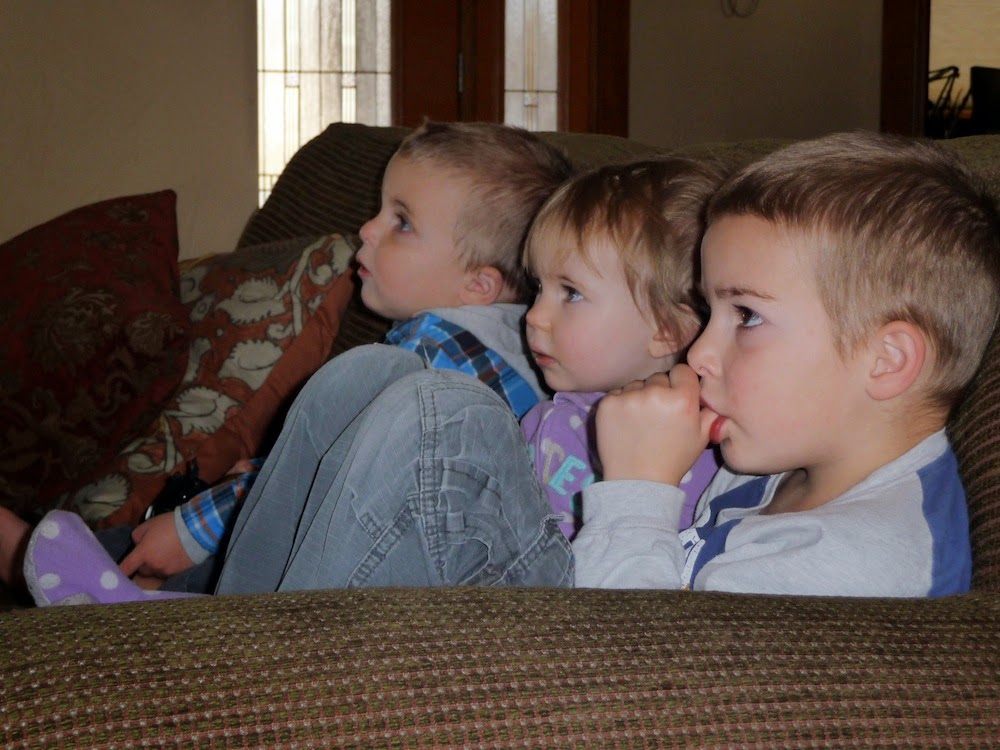 Sesame Street is on! Blake and the twins came over and briefly (meanly) teased Sawyer for watching the "baby show," then sat down and were enthralled themselves. I teased them back, the jerks. 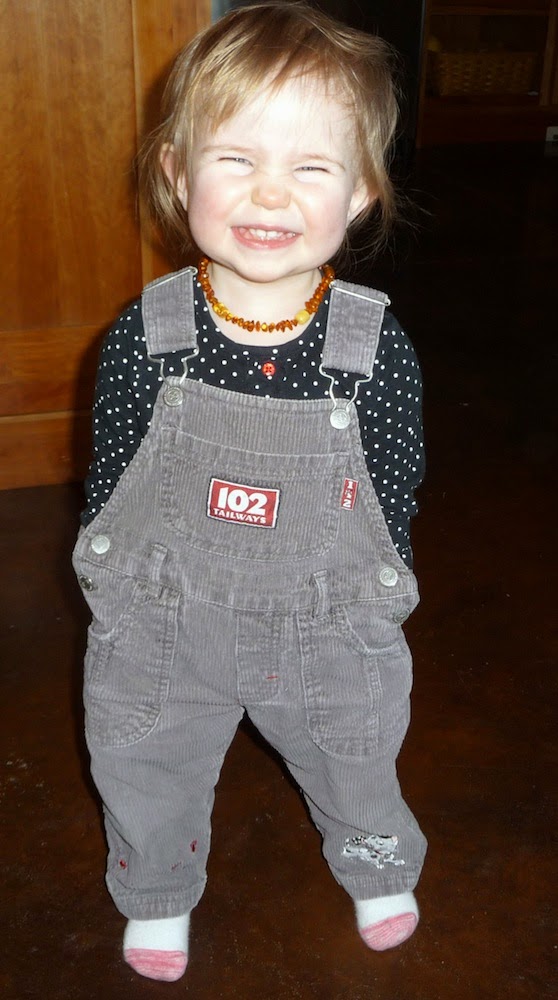 Disgusted by my lack of play clothes in V's bag, Grammie snagged her some overalls and beat up tennies at Goodwill, so that she could play outside without fear of ruining ruffles and pretties. Vesper LOVES THESE THINGS, because she knows she can get dirty in them. Also, I think she likes faking the pockets. 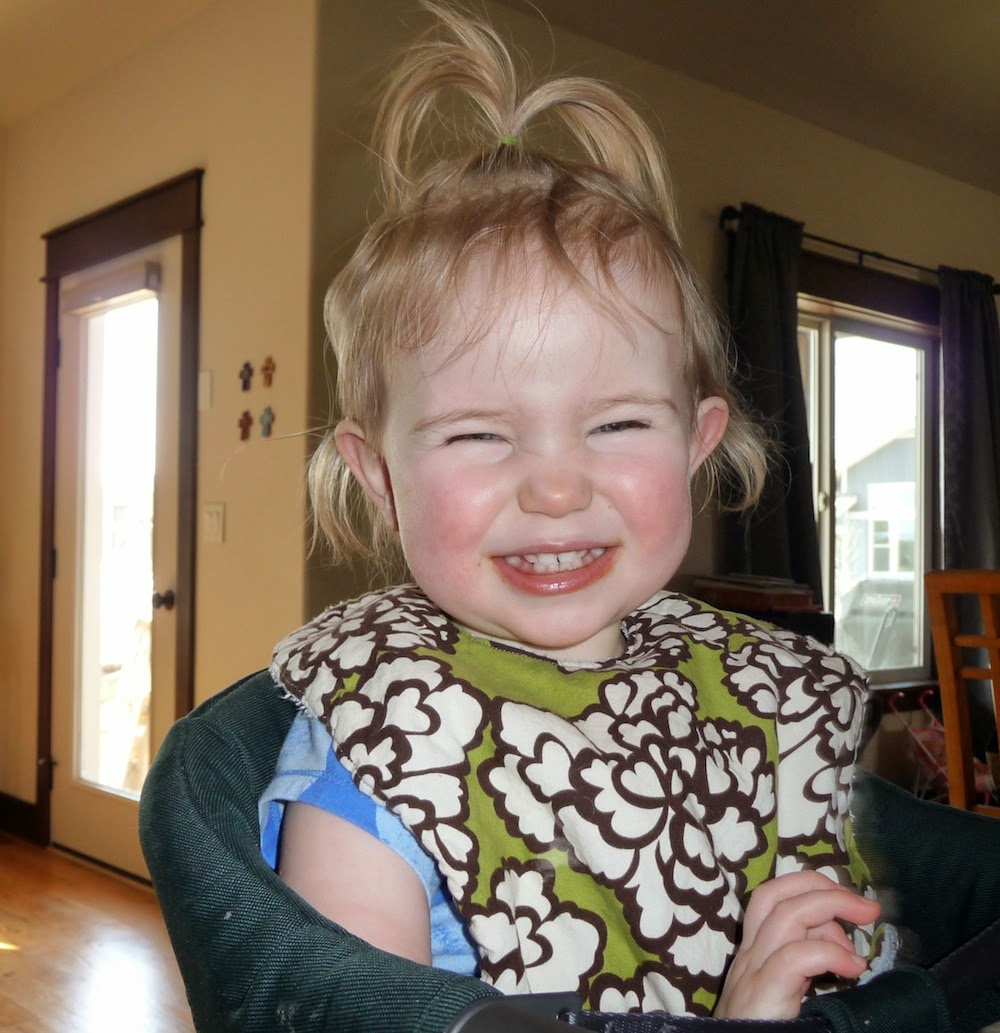 One of my first attempts at a ponytail/piggy/top knot/fountain. I also somehow manage to capture only squishy smiles, but she has other ones. I promise. 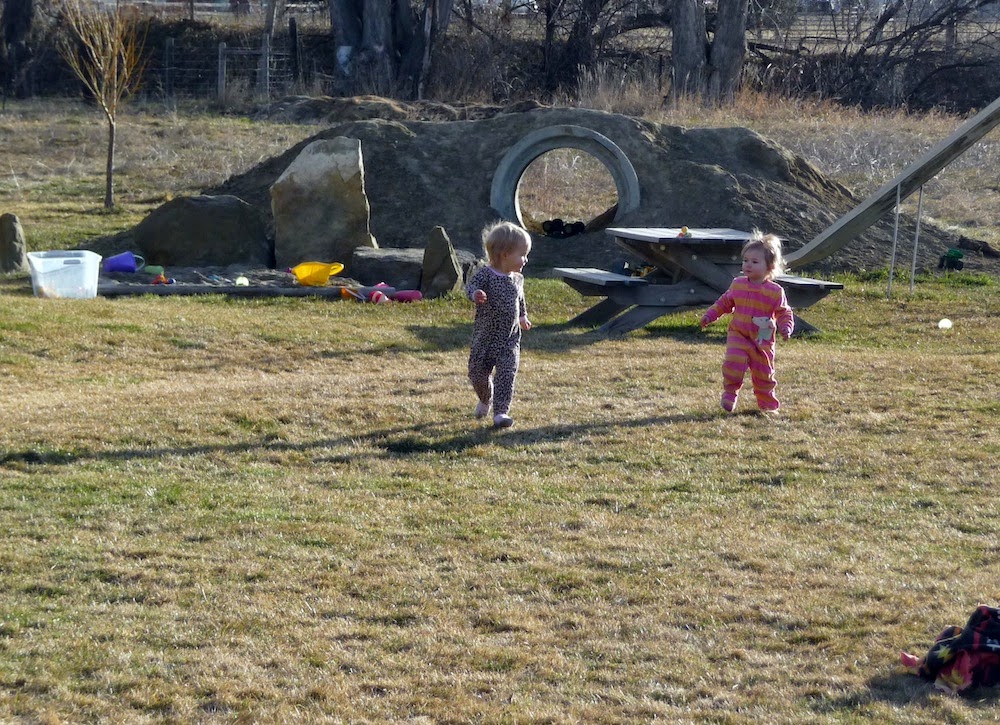 Jammies and cousins in the early morning hours. 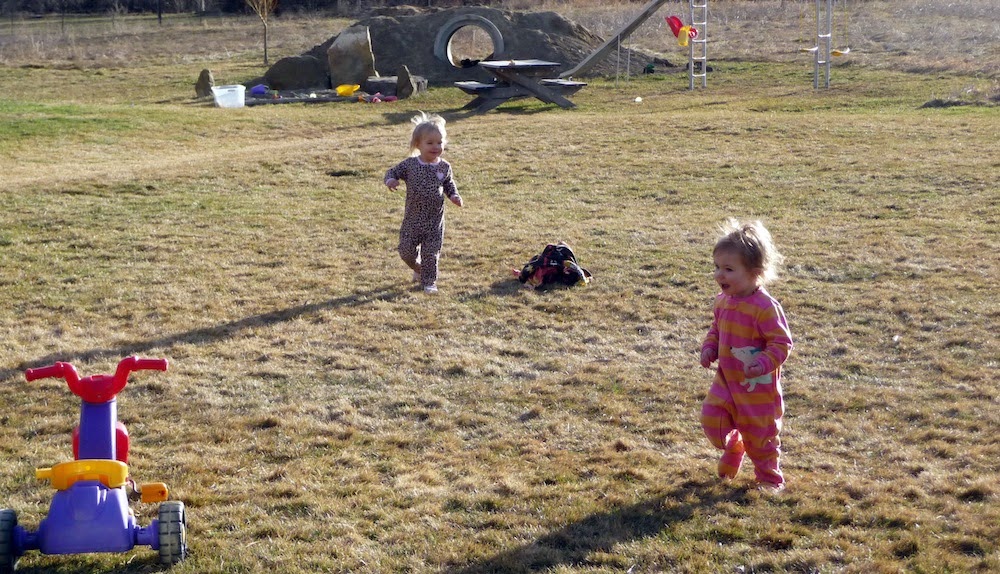 Audrey is Vesper's new favorite person. She calls her "Aubie," and if she sees ANYTHING online that resembles that sweet girl, V goes nuts. She looks at her pretty painted toenails (done together with Audrey) and repeats "Aubie" over and over again. 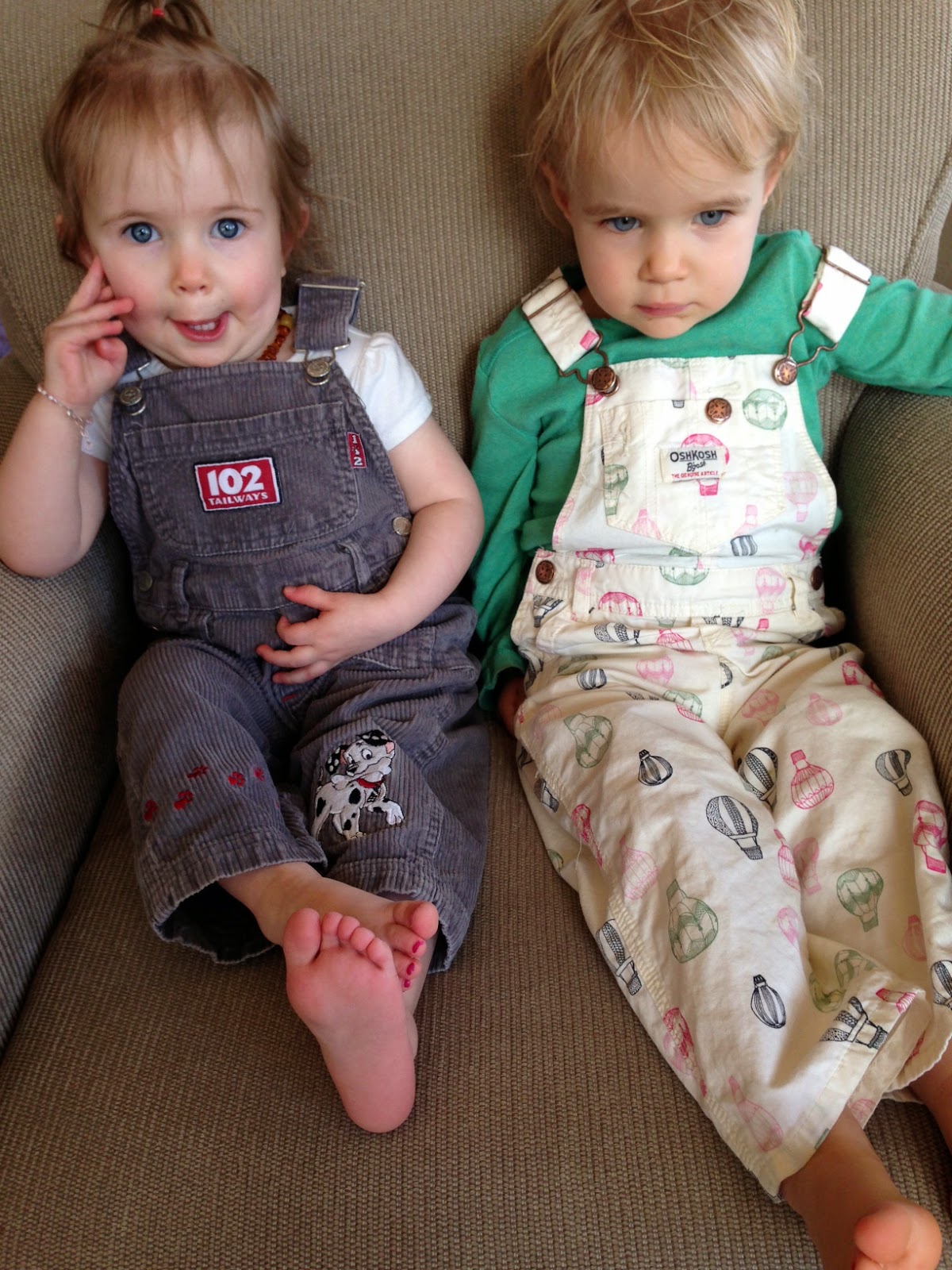 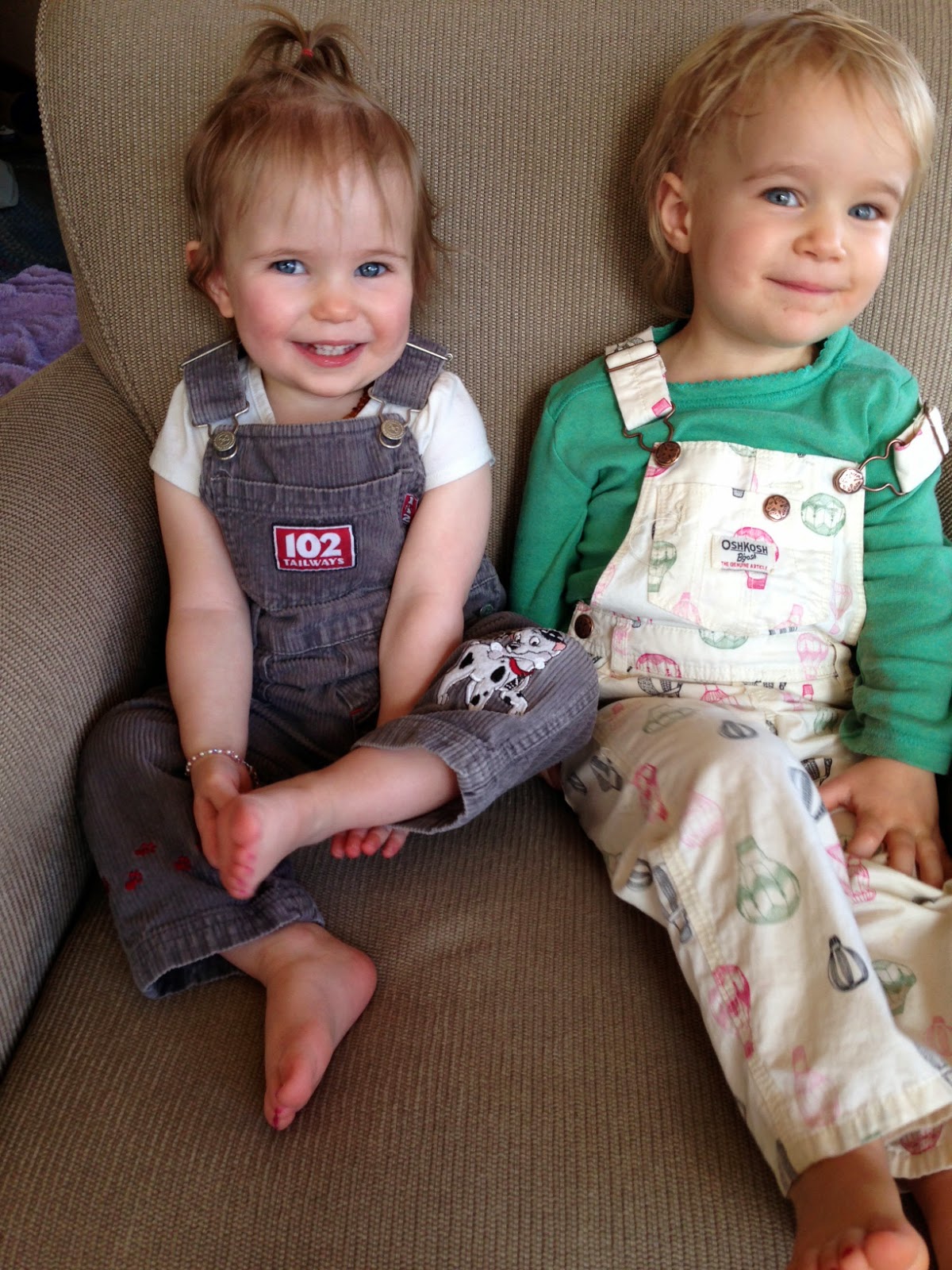 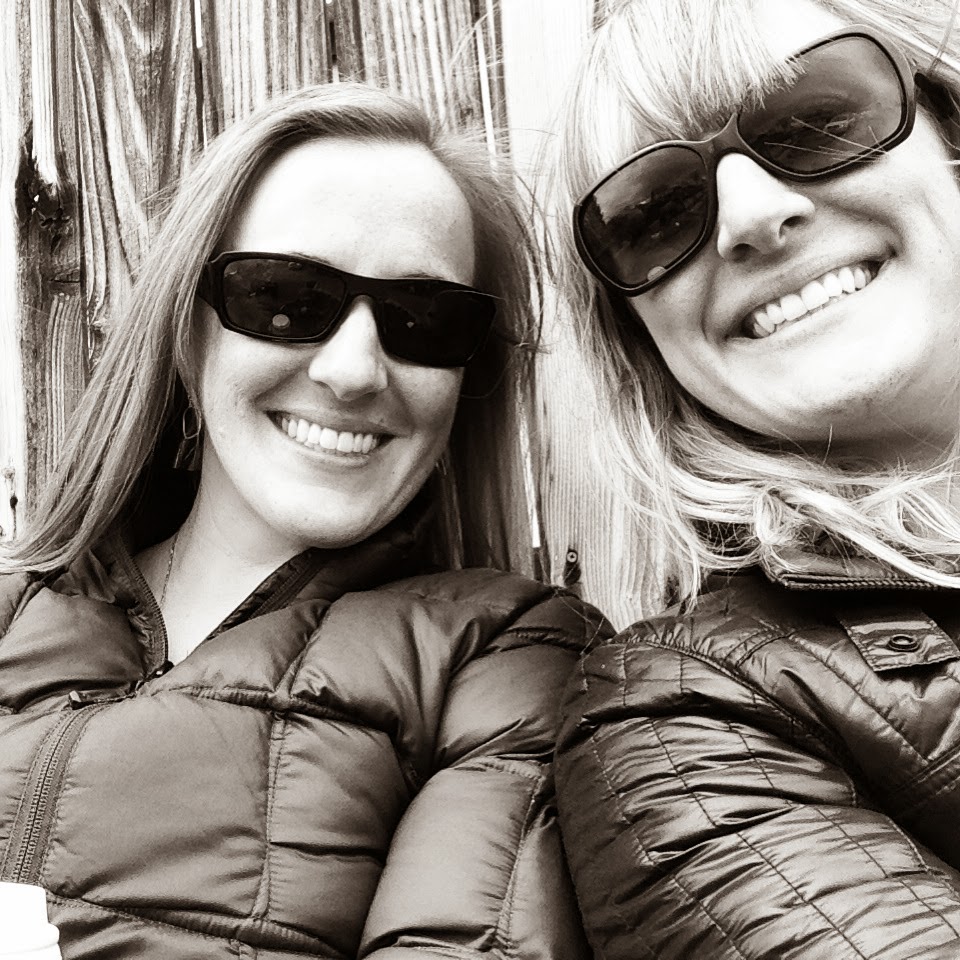 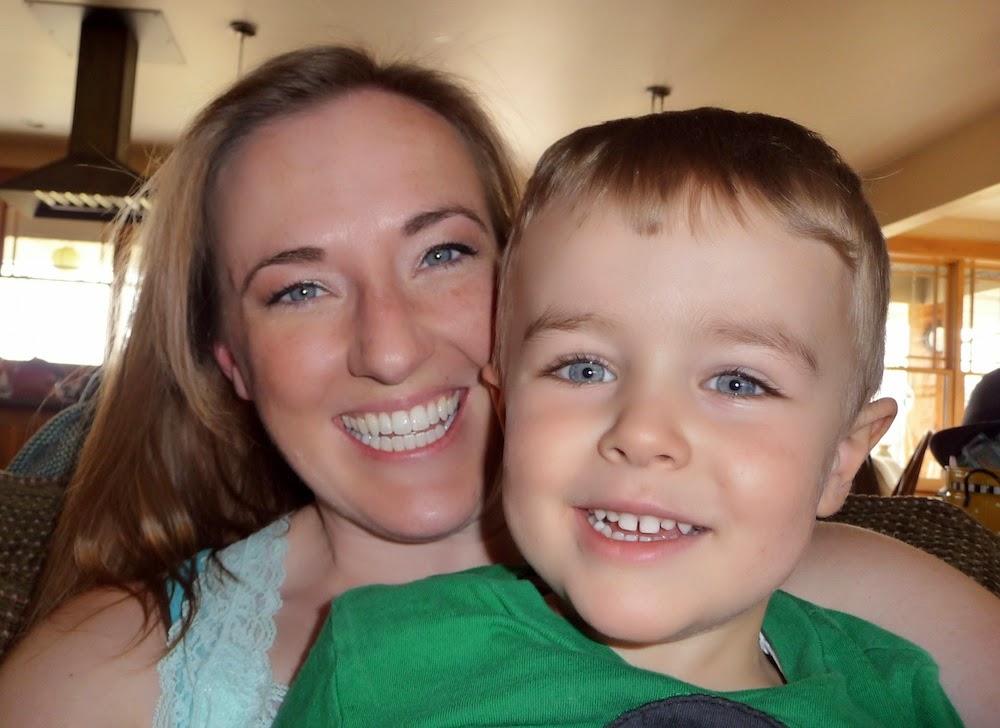 Selfies with the handsome Jetty Lion. 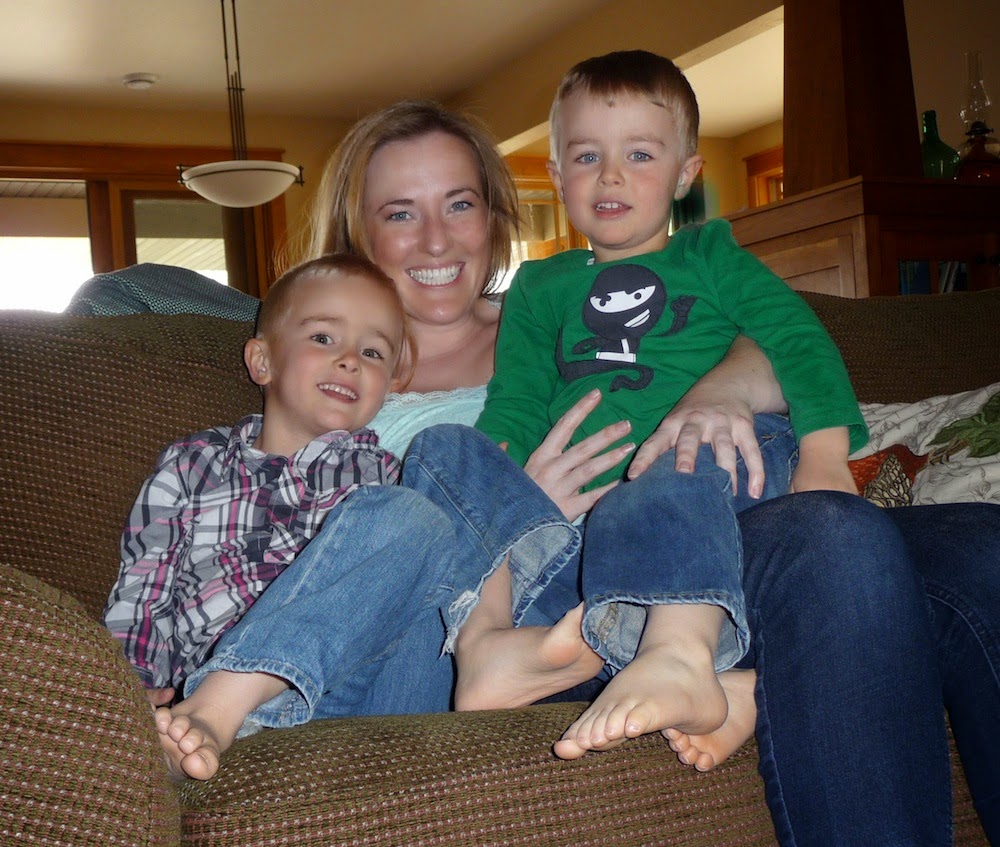 And mad Maddox wanted in on the action, so we set the timer. 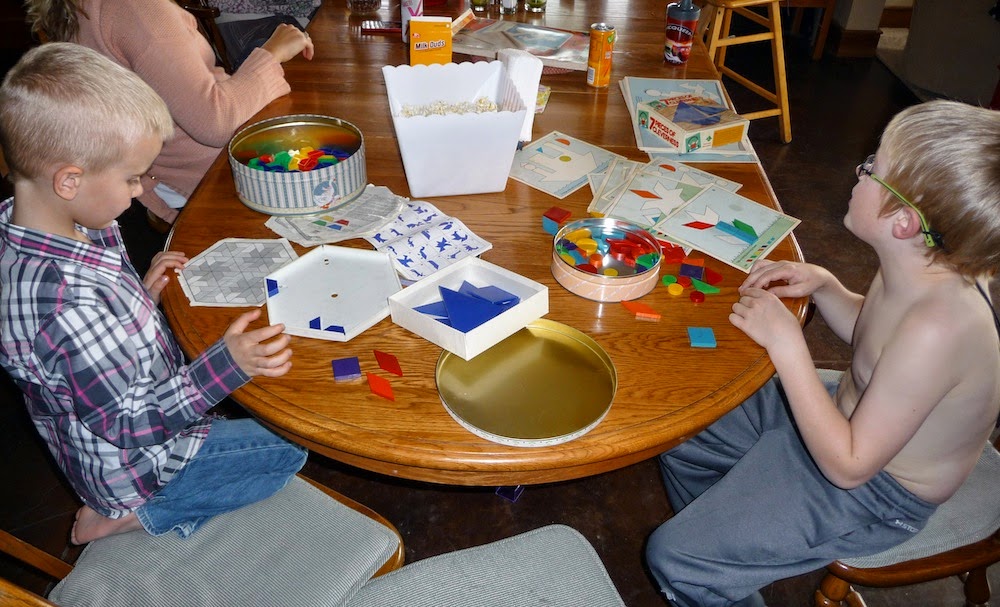 Blake and Maddox were BORED, so Grammie pulled out a box of games that we girls had played with when we were their age. It was fantastic. Also, my mother may be a hoarder. 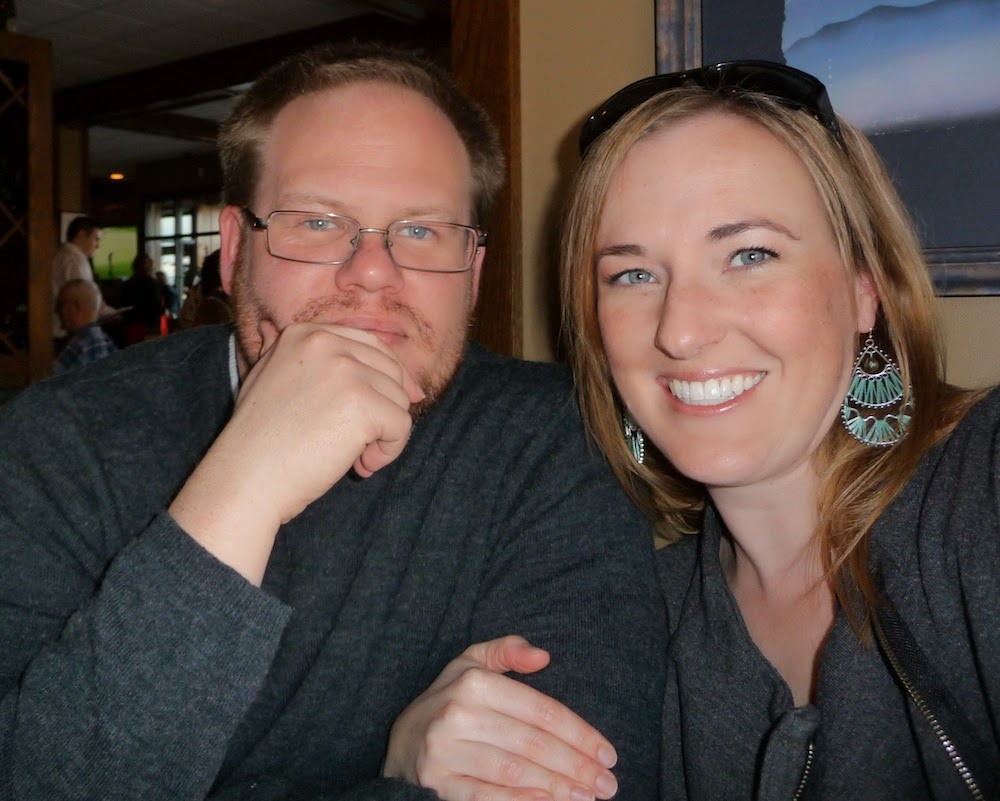 Five years, five years! For our anniversary, dear friends watched our children so we could go on a date. We drove over to Livingston for Rob's first time at the Rib & Chop House, and the main point that we enjoyed about that meal (other than its fine flavor) was the fact that it was HOT. Small fry and dishing up multiple people means that our dinners are usually lukewarm by the time we get to them. 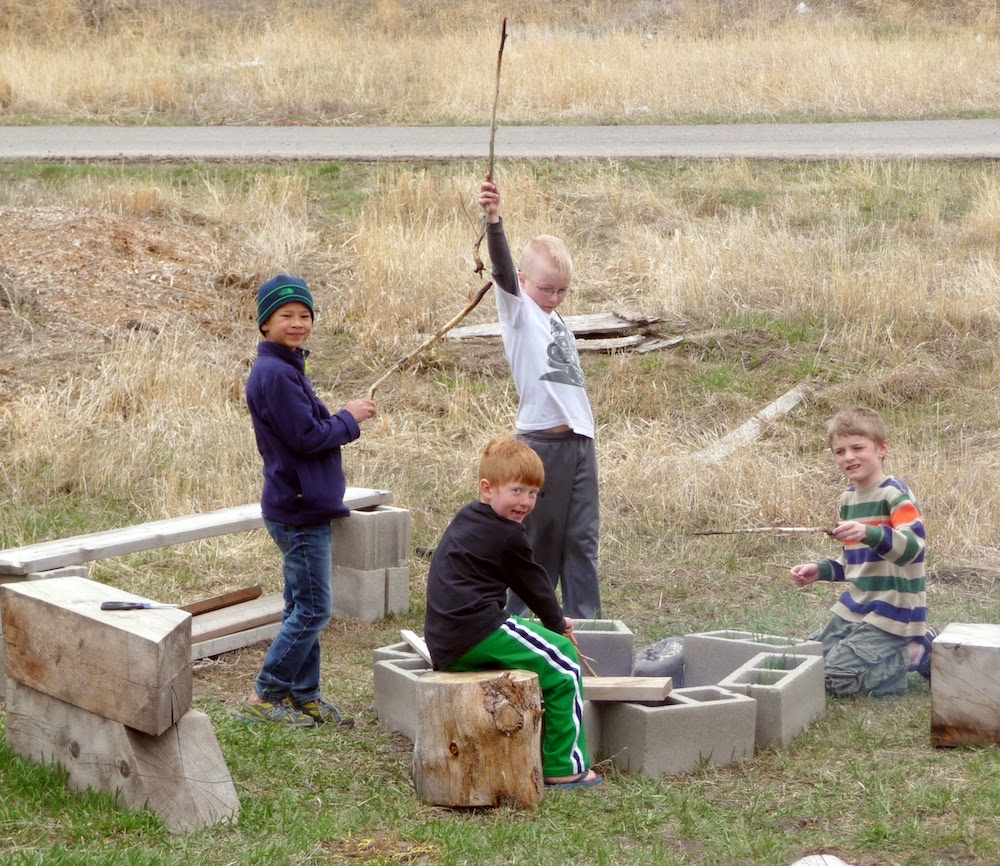 The Saturday gang. This fearsome foursome played a little Xbox, helped me start a fire in the pit, cheerfully burned many of the stray sunflower stalks that had dried to a crisp over the winter (they make excellent torches), jumped on a trampoline, roasted marshmallows, and warmed up with hot cocoa. I think we need to build Blake a fort out of old pallets and blankets, since there's an appalling lack of trees in the hood for anything fort- or tentlike, and we don't have room for a sterile, ugly jungle gym. We'll gradually take that empty lot over so much that it might never sell, simply out of pity. That's how it works, right?


There! I did it! You can deliver all the things to me now, especially if they are accompanied by wine or a back rub or time to myself. Maybe I can hide in the pile of things?
at 9:52 PM 3 comments:

I keep forgetting about this thing. Or rather, I have nothing that seems interesting to say, so I say nothing, forgetting that my children are supposed to say all the entertaining things so I can write them down. Or get it on video. Here's the latest.

B: (while listening to the acoustic version of Radioactive) It sounds like they didn't put as much effort into this version.

A: Where's Vesper?
B: She's in her rocking chair, reading her Jesus Storybook Bible.