Blake pulled my Sunday church bulletin out of the trash (that's right, no three-ring binder for me - I toss 'em), opened it, and started singing Jesus Loves Me, pretending to read the words.
*****
When talking to my mom on the phone recently, Blake proceeded to prattle on for so long that I broke in and asked for the phone back. He looked at me and paused long enough to say, "No, it's not ok to interrupt," then kept talking. After completely falling apart at hearing my own words sternly repeated to me by a tiny little dictator, I sat on the couch and tried to get his attention without interrupting. I poked him in the belly to make him laugh, but he just told me, in the midst of a story to Grammie, "Don't push my button."

He then walked over to the other side of the room and told Grammie I was being naughty, and that he had to go where I couldn't reach him. The kid talked for over five minutes, and when you can't really understand what's being said to you, five minutes of listening is an eternity.
*****
My son is afraid of Band-Aids. I don't know why, though when asked (in an accusing tone) "Why?" by my mother, I couldn't resist telling her that I had wrapped one around his penis and pulled it off. She didn't think that was as funny as I did.

So, after Grammie gave him a box of Spider-Man Band-Aids to try to overcome the fear, he proceeded to use them as stickers. 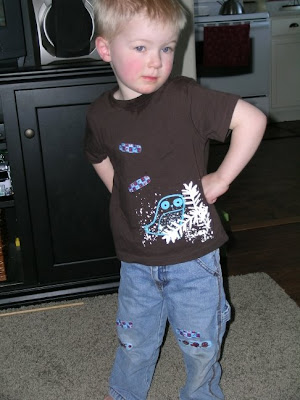 Pretty cool. However, he's also gotten a number of scratches, slivers, etc. on his hands lately. His fear of Band-Aids having not abated, we pulled out a trick I used when putting salve on his badly chapped feet. I would slather cream or salve on his excema, which invariably stung badly. The first time it happened, I refused to wipe it off, but wanted to ease the pain...so I told him I'd put on a "sock Band-Aid." Slipping socks on both feet put pressure on the chap, took the sting off, and made him happy.

Well, now he wears them on his hands. To bed. All night. Walking into his room for the last cover check before I go to bed and seeing a tiny sock-covered hand up next to his face is quite possibly the dearest thing ever. Also, it keeps the Neosporin from getting transferred from the places it's needed, so we're all good.

you really do have a very sweet, cute little boy!

"Genius!" as Hunter, my tutor-ee says every time I show him how to complete an Algebra problem. Sure has been fun seeing so much of you lately. I think your swell!

I want to see a picture of the sleeping sock-monster.