trying not to let my cold dictate my attitude, but it's not working

Rob made my coffee and breakfast today. Love that guy. My head feels like it's building pressure internally, which is largely due to the head cold that won't quit, probably because I do not rest enough, but possibly also due to what's going on in Washington. BLECH.

I painted the guest bathroom in an effort to neutralize the color scheme in the bedrooms/bathrooms of the condo. And I don't like it, despite the fact that it is perfect on paper/paint chip. This means I have 2.5 gallons of a color I can't use! I'm all freaked out about color now, so I picked up two quarts, each a different shade of pale grey with paler green undertones, and I hope to paint samples on the walls in each room I plan to have it before moving ahead with actual gallons of the stuff. As I told a friend, wasting money makes my ass twitch.

Blake is loving the Super Mario Brothers Wii game he bought with birthday money, but when Rob and I caught him watching us play it (at 11:45 pm, no less), I learned that he'd been watching for at least twenty or thirty minutes. The lure of the video game drew him from bed, and he very very sneakily opened his bedroom door and peeked out. I am SHOCKED at this, because it's awfully like lying with your body - we only caught him when he shifted his weight and the floor creaked - and we disciplined him by taking away Wii privileges for five days. His response indicated that this was indeed one of the most painful consequences he'd ever have to endure, and I cleverly worded it so that he cannot pester me to play Wii early without having more "consequences." I am learning how to dodge SOME of these parenting pitfalls!

I have picked up the kindergarten registration packet, though I have yet to actually open it. I know that I am very much a cliche (OH NO! A mother who has a hard time sending her first-born to school! HOW ORIGINAL!), I am very much ambivalent about B actually starting school. I have nothing specific that worries me, other than the plethora of other kids he'll be around (and their unknown behaviors/habits he might bring home) and the vague rigidity of a school year dictating our schedules. On the other hand, all those other parents could rightfully fear that mine will be the one teaching their wide-eyed innocents the wide variety of curse words out there.

Life is just so exciting! 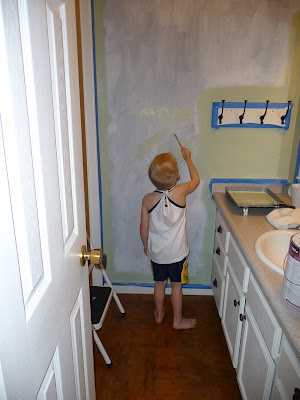 My painting help. He works for meals and a roof over his head, so it's kind of pricey, depending on how you look at it. 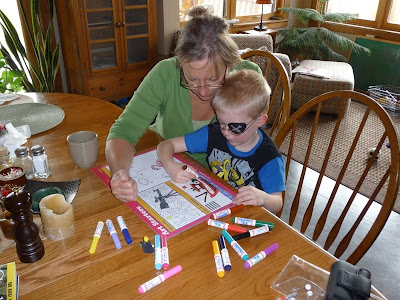 You can't tell, but he just got done bossing Grammie around while she helped him with patch time. 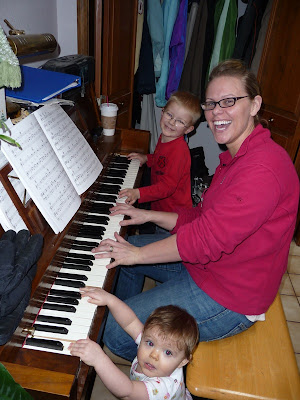 During our time in Spokane, we were regaled with Blake, Bethany, and Aislynn on the piano. They are available for birthdays, weddings, and bar mitzvahs.

Watch for popping, snappy fingers, fancy feet, an escape, and the cutest little tow-heads EVER.
at 4:03 PM

OMG! Thanks for the video! What perfectly charming tow heads! They are so cute together! They could be brothers! Kiss and hug Blake for me, I am so thankful to get to see Maddox so often! They all make me smile!

Also, the word I must type to verify my post is 'plevule'. Just thought you should know...