Remember when I took a few armed walks early this month? In between those super-exciting hikes, my friends and I went to the Natural Bridge, which I grew up clambering around on and camping near. Lindsey said her brother-in-law had found this awesome hole/cave that you could climb into and dangle your feet over the precipice and maybe I would find that fun?

Oh, Lindsey. If by "fun" you meant "a way to induce panic in a claustrophobe who is also frightened of heights and is a big baby in general," then YEAH! Good times! I looked down it and promptly threw up in my mouth a little, then graciously declined.

"HELL no. You guys can go without me. Have fun! I'll pick up your broken bodies downstream." 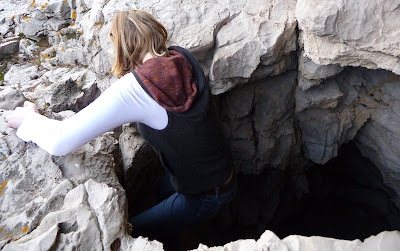 LOOK AT HOW SCARY THAT IS! She is so tough, I'm surprised that she didn't just dive in head first. Her head would probably have done more damage to the rocks than the other way around. 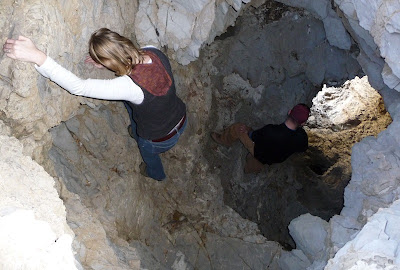 Okay, I suppose it is not that bad. But now I am all impressed with them and they are impressed with me, the one who managed to browbeat and/or guilt Lindsey into going hunting with us (haha! I mean hiking - which she's totally cool with) as well as shoot guns FOR THE FIRST TIME IN HER LIFE. Peer pressure: it's real. 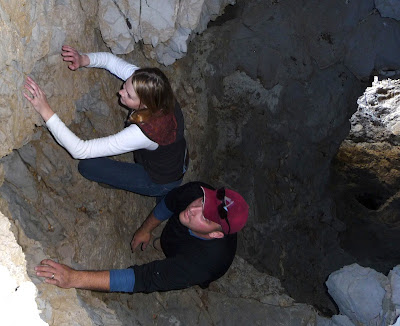 I was not being helpful at pointing out which handholds to grab, instead opting to blind them with my flash as they tried to climb out. It was very romantic for them, I'm sure. 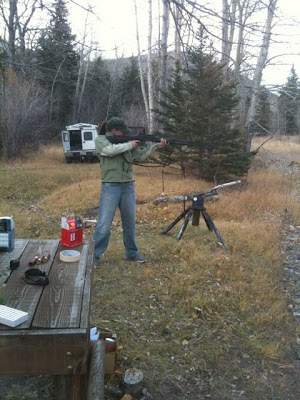 I don't think she shot this gun. I did and dropped the f-bomb because it kicked so hard (and I'm aiming at a clay pigeon that's about 10 yards out, lying on a stump... the ONLY way I'll aim at a clay pigeon, by the way). It's some sort of military grade shotgun that requires a certain degree of badassness to even pick it up. I'm not quite sure why I tried.

Also, I would like to note that those are Rob's jeans, which only stay up on me because of the wagon I'm draggin' and the fact that he has no butt worth speaking of (but hands off, it's MY non-butt!). That is my story and I am sticking to it. Also, I had a belt on. Blake thought my jeans looked "weird" that day, poking at the leg and saying "Mom, you have on wrong jeans. They are not sticking to your leg like normal." 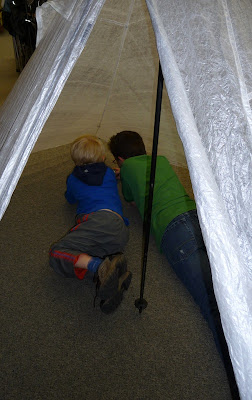 Upon returning home, Rob and I prepared for a presentation given by BackpackingLight at a local gear shop (Northern Lights Trading Company). It was well-received by all except these two, who pretty much played with my iTouch the entire time, totally unimpressed by the Cuben Fiber tarp with ultralight trekking pole that sheltered them.
at 7:05 PM