When Rob and I arrived in Billings (in mid-October), we made sure to have on our blue shirts and brown pants. Blake too. This was in response to the following post on Facebook, from Aubyn:

"Just wanted you to know that I'm going to wear a blue shirt and brown pants to dinner tonight. I think it would be very embarrassing for our first meeting to be wearing the same thing. ha ha ha"

There was a family dinner with all the family still in Billings: my folks, my sister Lane and Madnasty (Bing was working), my aunt Gail and uncle Todd, Aubyn, and us. Turns out the family that is no longer in Billings had collected their questions - one each - and emailed them in. Lane had two pages of questions from Bing. Everyone else chipped in until Rob was staring squarely down the barrel of a full-fledged interview after the meal.

I may have made a few comments to my family about not, in fact, interviewing him. My family, being themselves, made it a huge joke. Dad even took notes. My favorite question was Joy and Mike's:
"What's your definition of the perfect rack?"

See, they are climbers... but they know there are a MYRIAD different ways to answer that question. Before Rob could answer, Lane piped up with "34C." Rob eventually mentioned that the deer had to have a ten-point rack before it was worth shooting, scoring major points with my dad. He later told me that he would NEVER have brought up the bosom-definition of rack in front of my family... to which I replied "That's just because you don't know them well enough yet!"

Course, he is a Southern man, so his sense of refinement and propriety still needs to get shell-shocked by a Myers family Thanksgiving. Good times!

Todd said he knew upon seeing Rob's (blue) Atari shirt that he was good people. They proceeded to chat all evening about various things I made it a point not to listen to, including Rob's iPhone (quite a hot commodity in lil ol' Montana). Todd even invited us over for lunch after church, showing that he really really liked Rob. SCORE! I mean, almost anyone can win over the majority of my family. But Todd? He's a hard sell. It's why I like him.

We got to spend time with Molly and J.R., at whose wedding we met, and I hope we get to do that a lot more. J.R. and Rob were like giddy boys together, which was pretty entertaining, and it enabled Molly and I to enjoy some conversation. She and I are past the giddy phase of our friendship, but only just barely. We watched Ironman and Run, Fatboy, Run, which I still contend is a very funny movie, despite my folks' now fully eradicated faith in my movie-choosing abilities. Blake and Rob watched Transformers and shoveled snow together (photos already posted), and the rest is honestly a blur. Oh, but Rob beat me, Dad, and Mom at Scrabble, thereby gaining Dad's appreciation (he may no longer have to play) and Mom's respect.

Me? I'm still out for my own win, fair and square. Anyone want to practice with me? 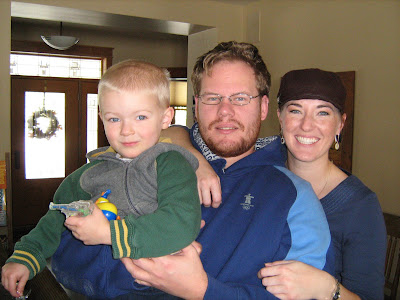 I'm working on not wearing that hat so often... except that I still do. Can't help it, apparently.
at 8:00 PM

I should think of better questions or I will give my blessing to every man in a blue shirt....

Rob is good people... Im sorry about the inquisition.

Rob, I can't win scrabble, and I still have shreads of Myers' respect. no worries!