Wrapping up my photo posts, I had to put one up of our latest Saturday/Sunday, which we spent with good friends. Well, they WERE just my good friends, but now they are OUR good friends. We corrupt people like that. Want to have us over?!

We all bundled up to Helena after Rob got home from work on Saturday. Chad and Lindsey Krywaruchka (they had a helpful pronunciation guide printed on their wedding programs back in the day, but you don't get one unless you click that link or read my side bar links) moved up there from Billings in order to plant a church and had invited us to stay in their spare room. Since Rob's been chafing at a limited schedule - well, it's not limited so long as he just wants to work - we figured it was an easy drive to see someplace new!

Linds had made a delicious carrot soup that included jalapenos, but apparently accidentally included one habanero, which she discovered after she itched her nose with a peppery finger. Chad's guffaws as he showed us the photo of her baking soda and milk nose plaster did not lend to a sense that he was overly compassionate, but it was awfully cute. And funny. And the soup was tasty, which surprised my carnivorous fella, who wants the recipe! I'll try to omit the habanero (or at least the chemical burn on my sniffer).

We joined them for Narrate Church in the morning, then went for a little walk to grab some breakfast. On the way up the street, I heard a goose honk, then saw a young woman run out from behind a big planter, with a spread-winged goose running after her. Alarmed for her safety, I called out "KICK IT!" just as Lindsey turned to tell us about this family that walked their pet goose on Sunday mornings.

"Oh my gosh. DON'T KICK IT! I'm so sorry! I was scared for you!" I backpedaled furiously as everyone but Blake (who had been oblivious to the goose) snickered helplessly and the family gave me the stink-eye.

I later told Blake he could chase off some pigeons, to which Rob hollered after him "Make sure they're not someone's pet first!"

The museum was closed, but they had this giant bison skull (which kind of freaked Blake out a little) and a teepee out front, as well as... 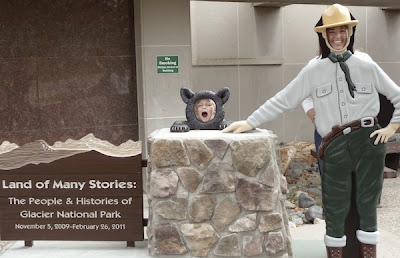 a fearsome bear and a cheerful ranger, or... 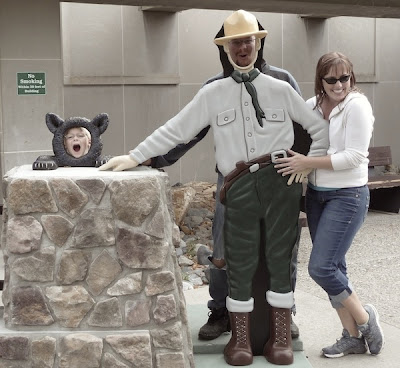 a fearsome bear, scandalized ranger, and scandalous hanger-on, or... 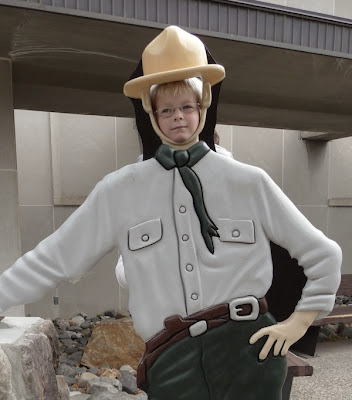 a very serious ranger. Only YOU can prevent forest fires, unless lightning got there first. 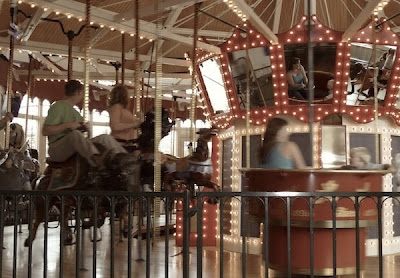 This is the best shot of our time on the carousel. We didn't get photo evidence of Chad trying to toss a ring to Blake and nearly sinking it down my shirt (Chad and Linds are on the left, Blake and I on the right in the cup-looking thing that I could barely twirl). 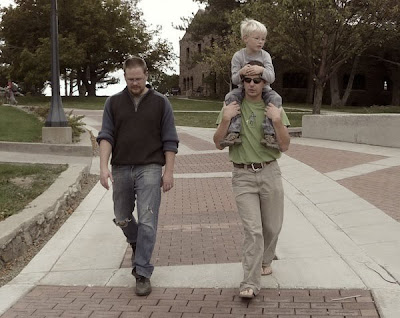 We drove and walked around, had a lot of tasty coffee, were pleasantly surprised at the cost of living and land, and just enjoyed time with our friends. Lindsey is a rare soul for whom meaningful and deep conversation seems to come easily, and Chad is remarkably productive for someone with the attention span of Dug. We had an understandably great time and can't wait to go back. Just gotta remember to bring Blake's allergy meds - he loves their kitty Lops and wants to rub Lops all over his face.

I love this post because I just think you're so funny. But I love the title most of all, because I am always looking for ways to be tacky, and you found a perfect one.

Pee scatter? Smelling farts? Nose Picking and eating? This was a vid for church? Hysterical!

I can't stop laughing at many things right now: 1) KICK IT!!! 2) Grammie Perrine's reaction to the video made for church and 3) Blake wanting to rub his face all over Lops. What a complimentary post I feel famous, but most of all loved. Thanks for your company and friendship, maybe neighbor-ship?? :)