still hasn't lost its luster, but he doesn't like music class, sadly

By the time we got back to Bozeman after our week-long August vacation, Blake was fairly vibrating to get to school. He had a brief wait, as the kindergarteners start a few days later than the other students, so we had time to relax a little, visit a park, buy school supplies, and get one last day in at his preschool. I brought back my (actually big Blake's) old alarm clock from a spare room at my folks', and Rob set it up for 7:00 AM. We started practicing getting up early on Monday, and Blake bounded from bed like an over-eager puppy.

The day before school started, we had orientation. We met his teacher, student teacher, and a few of his classmates. The parents were shunted off to another room for paperwork, and I quietly freaked out a little bit while filling out forms. It came home loud and clear: another person/group/organization will have a great deal of influence over your child from here on out.

Parenthood, mothering in particular, is one long process of letting go. First you let go of them from your own body, then you let another hold them, then feed them, then care for them so that you can accomplish something else (work, dinner out, a movie, or a stiff drink). The periods of time you leave them with another grow longer... and longer... and one day they are school-age. Rob and I are confident in our decision to use the public school system - I know and love some excellent teachers, after all - but it is a daunting prospect. Not only is his delightful teacher instructing him in reading, writing, and 'rithmetic, but he'll learn other modes of communication, conflict resolution, play, and other value systems. I read the disclaimers and waivers about kids using computers in the classroom, and I was torn. I want Blake to understand and learn all kinds of things - many which I cannot teach him myself - even as I want to protect him from the hard or dangerous lessons.

I came back to the classroom to find Blake cheerfully exploring the little centers Mrs. S had created. She warmly told me they had toured the school, and that he seemed very confident and comfortable with the idea of being here. In fact, his first question after shaking her hand was "So, when do we learn about science?"

AHA! That is pure daddy Blake. Much of his personality can be aimed back at me - only natural, I suppose. Margie tells me that big Blake was enamored with tiny toys, MicroMachines in particular, and LEGOs as well, but this is the first really specific personality example I have of the big Blake I knew coming out in little Blake. It was comforting and alarming. Mrs. S will have to hustle to keep up with this one! 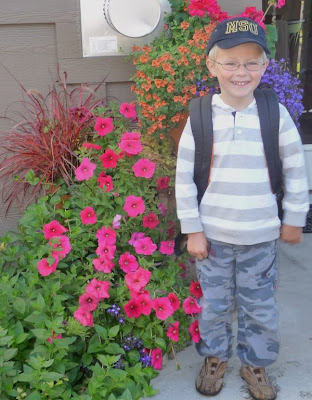 I parked and we got out, walking hand-in-hand to the blacktop in back of the school. He set his backpack down on the grass and took off at a dead run to the far side of the playground. I had to run after him to get a hug, and even then, he firmly instructed me to please not pick him up for said hug. I had half a mind to coat my mouth with lipstick and plant a few smooches on his forehead and cheeks in retaliation. 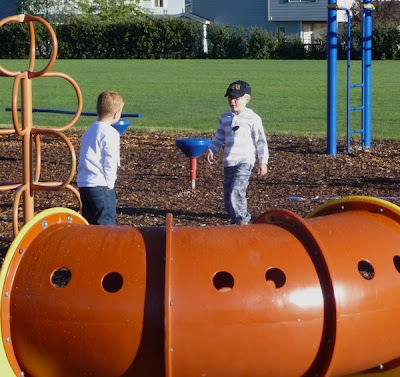 I came to get him up mid-way through his first day, as I had signed him up for half-days, and he was nearly in tears. He was sorely disappointed about not at least staying for lunch, so I told him he could be full-day starting tomorrow, but that he couldn't change his mind after that.
"Do I get to eat lunch here if I'm full-day?"
"You sure do. Whatever you like to eat."
"Oh YES! I would like a bologna sandwich please. They are delicious."

Wha? The kid's never had bologna. Also, when telling me all about school that day, his eyes got thoughtful as he said, "It's kind of weird that I have school at our church."

Oh, yeah. About that... not quite. See, our church meets in the gym of his school because we're still too poor/small to have a building of our own. Guess that explains his running pell-mell to the playground - he's known it well for over a year now! 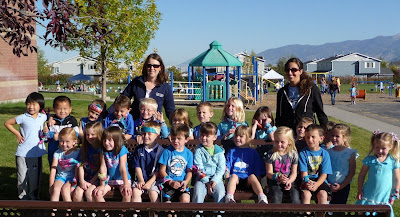 Our first fund-raiser. He was permitted to call grandparents only, and he proceeded to raise $60 for improvements and additions to the school playground. 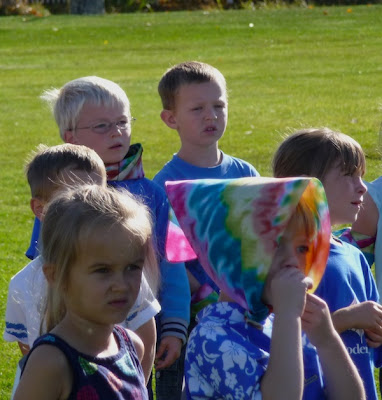 Everyone was given a tie-dyed handkerchief that was tied on them somewhere. I stripped off his sweatshirt and tied the bandanna round his forehead after he had run about two laps, because it was a warm, wonderful morning! 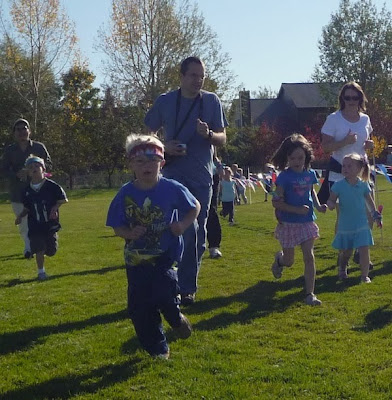 Steady as she goes! Everyone is running straight for me because I had a Sharpie in my hand to help tally laps for each child. The whole thing was so cute it hurt me. They ran around a 100-meter track for thirty minutes, and he got in thirty laps!
at 5:20 PM

Letting go is a long process. It still continues and is a hard concept, but be very happy he wants to go to school. It is so much worse if they DONT want to go to school.

Love this post about the 1st day of school... and the running pic is AWESOME! BTW LOVED your unbroken jar of chokecherry almond jelly. It was delicious. We ate jelly and bread every chance we got, but alas left the remainder behind as we only had carry-ons and a jar of JELLY is not on the okay list at the airport..it was definitely more than 3oz, plus gel-like substances scream explosives...DAMN! Thank you! YUM!

PS - When I say.."left behind" I meant at Bing and Lane's NOT in the trash at the airport. So it will be appreciated!

Great Post! I wished I could have seen him ask when they get to learn science. Love it!

I can relate with the whole process of dropping off your child the first day of K. You captured it well in your post. It is weird to know that Kalli will be in someone else s care most of the day. She started K this fall too!