I really really hate rodents. Mice especially, but voles, gophers, prairie dogs, and ground squirrels are all pretty disgusting and low on my list. They are just so DESTRUCTIVE. I have been known to kill them while gardening, in actions that can only look like a partial seizure to those observing from afar.

One night this summer, I went outside and lay on the sidewalk to watch a meteor shower. Rob joined me, and after seeing about a half a dozen, we went back inside. I reached the back door first and saw that Rob had left it open a few inches, and I thought, "That's not ideal," but thought no further.

No further until the next morning, however, when it was clear that something had eaten 'round the perimeter of all the mini-cakes I had set out on the counter. Looking closer, it appeared that same something had dive bombed itself into one of the cakes and dug hard through the frosting, looking for cake treasure. I about lost my mind as I began frantically pulling open drawers and cupboards, looking for (and finding!) more sign that we had a small, furry intruder. My spice drawer was seriously compromised, as was my thickest oven mitt and a lovely apron given me by my sisters as a wedding gift. Everything had to be washed/tossed/sanitized, as it had either chewed through things or crapped a ridiculous quantity thanks to the cake cruising through its system. Oh, and did I mention the condo was still on the market at the time? Super.

As a friend noted, even after trapping the small field mouse in our pantry, "Keep looking. There's never just one." I have no idea how the second died - Rob found its body next to our wastebasket in the master bedroom. It had nested in one of our towels, doing a surprisingly small amount of damage, though I fully expect to find more whenever we pack up and move out.

During Christmas time, I began noticing tiny tracks in the snow, leading from beneath the corner of our porch. And this guy got bolder, running back and forth across the porch to access the birdfeeder round the corner. I was transfixed and torn: "Way to go, little buddy! Way to survive in a tough, long Bozeman winter! Except... I hate you and kind of want to kill you. No rodent close to our home survives long."

I hoped that one of the many many cats around here would catch wind of the little turd and take care of it for me, but no dice. Early this week, I finally set out a few snap traps and one I had borrowed from my father: battery-operated, it actually zaps the mouse. Then it started to snow, heavily enough that by midnight, I had pulled the electric trap inside (didn't want it to short!) and moved two of the snaps so that they didn't get lost in the snow, only to be discovered by a careless hand or foot in the spring.

Upon coming home with Blake after school on Wednesday, I was startled then, to see a dead body near the middle of our back porch. No trap. No sign that it had been a cat-er-mauling. Just a dead vole (a little bigger than a mouse, shorter tail) lying there. I guess the very presence of the traps scared him to death?

It does beg the question: what sort of strange powers do I possess that kills nearby rodents without the use of traps?

Could be this tough guy... 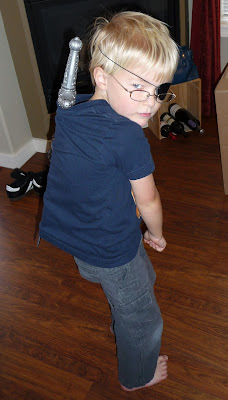 Well, if all I need is your presence to kill off some of my rodents I may make you sleep on my back porch when you're here visiting :)

I think I need to borrow your tough guy indefinitely. I have a phobia of mice. I hate all rodents in general. I tend to agree with Carrie Bradshaw, that a squirrel is just a rat with a cuter outfit. Weird that the guy just keeled over...p.s. calling himself a "vole" and having a shorter tail doesn't make him more evolved. He's still disgusting. Who does he think he is?

What is the deal with rodents in Montana? I have lived in the country and NEVER had a mouse in the house...well once but Barney beat it to death... oh yeah and once we had bats doing laps in the front room. YIKES... It must be the cold weather....poor little rats need to get warm, I'm guessing?

Get a tin cat. Place dogfood and rodent poison inside. Tolerate the scratching noise until you smell the little buggers then dump them out in the trash.