Just going through the old camera. Not much happening these days, except that there's a lot, it's just kind of dull. Case in point: today I broke up a 4-inch thick slab of ice that covered part of our sidewalk (~15 feet long). Yeah, I'm kind of a big deal, and now my shoulders and hands hurt. At least my rear won't hurt from falling repeatedly on the very slippery sidewalk!

My job is going through a season of growth after an extended period of not-growth, and it's fun and challenging. I'm training an intern (probably only get him until the end of May, but it's nice to have a break from all the words I have to read - now I should pick up something I want to read!), and I'm training a subcontractor. The long-term goal is to free up some of my time, but it's taking an awful lot of time just to get them up to speed.

Rob's job is kicking both of our butts, so much so that his boss - a good man who loves the Lord and "gets it" - has offered him a possible transfer to another store. It would be a better position, better hours and pay, in a more affordable location. There's another possibility out there that I can't really talk about, but after this time of just sucking it up and feeling like we are stuck, we may have options! It's exciting, but also a little scary. I would have a lot of tears to cry if we decided to move away from Bozeman.

Blake's in the trudging middle ground at school. The end isn't quite in sight, so it's very difficult for him to want to go. And it's only KINDERGARTEN, for crying out loud! He's anxiously awaiting the day he gets to go spend two whole weeks with Grammie Gee while we're in Hawaii. We've made it past Christmas and birthdays, written nearly all the thank you notes, and all of us are anticipating that really exciting event. He's bummed he cannot come with us, but Grammie Gee and Grampa Kent are a pretty reasonable alternative!

A raptor of some sort, probably preying on the birds attracted to my feeder. Catherine, what says Sam? I packed up my bird book and am too lazy to look it up online. 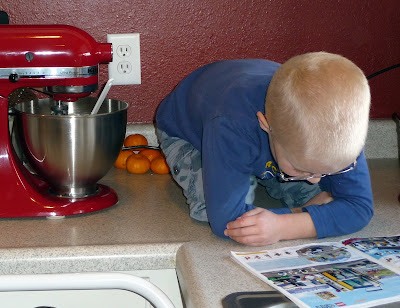 This is what it looks like when B helps me bake cookies. He's gazing at a LEGO catalog. He treats them like magazines, and knows which products are in which catalogs, and is not happy with me when I throw away one of his collection. 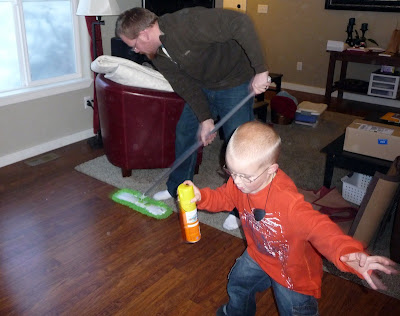 How we mop around here these days. The only problem is when guests come over, do not listen to my warning about their wool socks (SmartWool is a prerequisite for living in Bozeman), and nearly kill themselves. Then it's time to strategically rearrange the throw rugs for their protection. 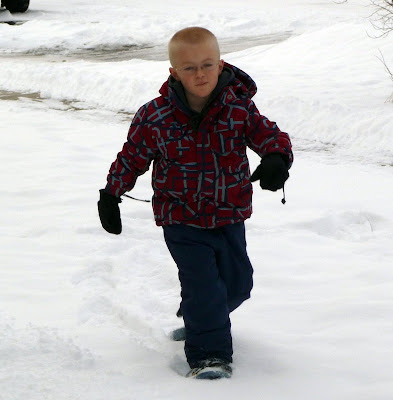 I tried to round up all the stuff so B could practice skiing, but had forgotten that while we have skis and bindings, we had no boots for him yet (that's been fixed - thanks Poppa & Nonna!). Instead, I found the snowshoes I had purchased back when he was two and far too tiny for them. They finally fit! Though bummed about the non-skiing (and look at that bad-ass face!)... 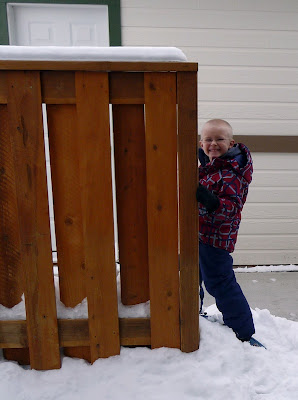 ... he was REALLY excited about the snowshoes! They leave a paw print within the outline of the frame, and he just loves tramping all over our small yard, then examining his tracks for the paws. 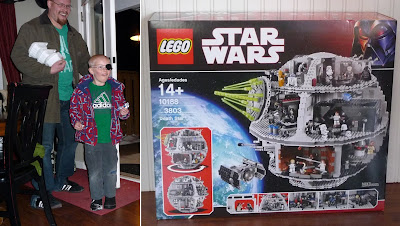 Finally, this is what a five-year-old with four sets of indulgent grandparents and many loving aunties and uncles can buy for his sixth birthday after a diligent year of saving (click to enlarge it and see his face). He knew it was coming, but was still absolutely quivering with excitement when it arrived. There were four large boxes within, and the first three have been opened and assembled. One more to go before it's complete and then we have a lively debate about where it goes and what we're going to do with it.

I'm really looking forward to that part, and because sarcasm doesn't always work in print, I will flesh it out for you: NO, I AM NOT.
at 5:23 PM

So, it seems to me that your hubby works for a company that is a Bozeman or only in Montana company and sells appliances. At any rate, I'm pretty sure that the company that he works for doesn't have any business in Denver. But...ever since I read this I've been fantasizing that you had to move here. It's been a good morning.

And also, Holy Cow, that lego box is taller than he is. How CUTE!

Oh my the many faces of Blanke...love them all!!